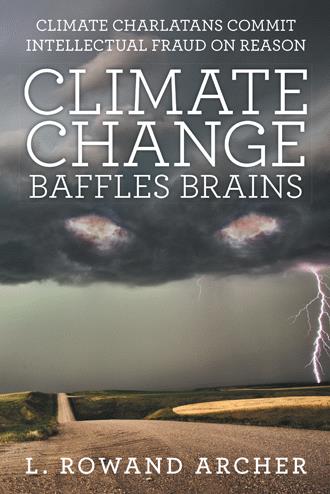 Chapter 1 Climate Alarmism Has Become the Duty of Charlatans

Back in 2008, Bruce Walker wrote an article, “Madness and Political Life” (Walker 2008), in which he cites a quote from George Orwell:

Walker then asks the question: “How often do we have to return to the words of Orwell to make sense of the world today? There is madness in our lives, and it neither seeks nor wants a cure. Great nations are altering their economies, impoverishing their poorest subjects, condemning their progeny all in support of the lie of global warming.”

Despite the fact there is actual agreement on there being cyclical climate change as part of the earth’s 600 million+ years of climate history, our current understanding of why these cycles have occurred is in its infancy and is far from being considered settled science. In fact, right now there is debate as to whether the earth’s climate is still warming after the “Little Ice Age” which ended around the 1840s or is the earth’s climate beginning another cooling period, with temperatures leveling or slight cooling since 1998. To counter Mother Nature’s pragmatic reality, the climate warming alarmists’ “consensus” science has now moved their doomsday scenarios out 50 to 100 years, so there is no way to scientifically test their computer modeled nonsense. The most depressing part of all this is that otherwise sane people seem invested in this catastrophic silliness.

Walker further argues that universities have become havens of official intolerance and bigotry the likes of which free market society have seldom experienced. More galling is the fact that almost everyone encourages young adults to go to these colleges and that parents and students spend vast amounts of money for this education while even more billions for university education is funded by taxpayers. Yet university administrators and professors seem overwhelmingly hostile to free market societies and its ability to create prosperity for its citizens, to Judeo-Christian moral traditions in guiding the development of fundamental Western freedoms for its citizens, and its democratic political systems, and even to honest science for such common issues as global warming or arguments on the utility of Darwin's Theory of Evolution.

Further, Walker suggests universities have almost morphed into an Orwellian Ministry of Truth. The dangers of a monolithic and totalitarian system of education in a democracy are obvious to anyone but the willfully ignorant. We have sunk to a depth where restatement of the obvious is the duty of intelligent men.

Stated differently, Norman Rogers, in his article “Tell a Big Lie and Keep Repeating It” (Rogers 2017), argues that “if you want to tell a big lie, a good vehicle is “science.” The general public is gullible to these scientists’ doomsday predictions because science and scientists have a positive image.

However, Rogers argues this positive image belongs to the science of the past, before the entrepreneurial idea of inventing fake catastrophes to attract vast sums of government money. And lies backed by millions of government dollars makes it difficult for the truth to compete against. A trusted truth can only come from scientists not corrupted by money. As well, the truth is outgunned by the government’s financed propaganda mills. These promoters of fake catastrophe depict themselves as disinterested idealists, while the promoters of the truth are depicted as servants of evil industries, or as mentally disturbed crackpots.

In the U. S., as a climate skeptic, you may lose your job, or almost certainly you will be vilified as incompetent. But so far, a skeptic won’t go to prison or to an asylum, although there are calls by climate alarmists to criminally prosecute (Barkoukis 2016) “climate deniers”.

Rogers concedes that if obvious, stupid lies, like the competitiveness of solar power, can gain popularity, and as long as those with the potential to expose these frauds are afraid to speak out, it’s hard to see how fake science can be stopped or slowed down.

From Rogers perspective, the scientists who openly oppose the climate alarmist industry are invariably retired or otherwise occupy impregnable positions that protect them from economic retaliation. He cites a list of 1,000 such scientists (Morano 2010) that oppose global warming alarmism. In contrast, there are very few young and upcoming climate scientists (Anderegg, et al. 2010) that oppose the industry. The reason, according to Rogers, is if a young scientist opposes fake science, the individual will be unable to remain in the scientific field, therefore not able to get a Ph.D. and certainly can’t get a job. Remember, an entire multi-billion-dollar industry is dependent on the public credibility of fake science. Dissent is not tolerated.

As well, despite there being plenty of scientists for whom science trumps money, but for the important bureaucrat scientists that exercise power and run things, money trumps science by a mile.

So, the conflicts inherent in the present socio/political/scientific arena of climate discussions is nicely summarized in Shakespeare’s Hamlet which pondered the eternal conundrum of competing choices: “Aye, there’s the rub”

Further complicating these choices is addressed by the Italian philosopher Wilfredo Pareto (Rogers 2015) who pointed out, people form their opinions based on passion. Resorting to logic and data is basically window dressing to support their previously adopted opinions. That’s why it is so difficult to make ideological conversions by means of logical argument.

It is this observation by Pareto that helps to explain the stubborn attachment to the carbon dioxide forcing dogma by climate alarmists. Charles Battig, in his article “Climate Change Hysteria and the Madness of Crowds” (Battig 2014), expands on this observation by noting that after years of relentless doomsday prognostications by a variety of public voices spanning the political-scientific spectrum, they have found their mark in a gullible and guilt-prone public.

We have now sunk to a depth where the restatement of the obvious is the duty of intelligent men.

George Orwell’s words are worth repeating as climate-warming alarmists promote doomsday scenarios that have no basis in science.

L. Rowand Archer examines the lie of global warming—and the motivations for it—in this treatise that exposes the socialist agenda and fear mongering of the liberal left.

Lost in the propaganda is the fact that man-made CO2 emissions have greened Earth, transforming some former desert regions into verdant oases of greenery, and contributing to record crop yields. Instead of demonizing CO2, we should be praising CO2 for helping to feed the world.

Because weather is familiar to all,

it seems that everyone has a theory about what causes climate change, and that makes it difficult to argue rationally about the real science behind climate change.

This book is intended to provide a nontechnical understanding of climate skepticism as argued by over 300 knowledgeable authors in their fields who question the notion that humankind is the major influence of climate change. Get real answers to what is really happening in Climate Change Baffles Brains.

After receiving a university degree in Economic, L. Rowand Archer enjoyed a 48-year career in the private sector where he successfully moved up the management ranks of various banking organizations, then created a business operation focused on software development and marketing to the manufacturing sector. The company’s technology package provided integrated administration and production control modules to achieve efficiencies in its customers’ daily business operation, which required real-world understanding of the work lives of real people and their personal life issues.

Drawing from this extensive front line experience, Mr. Archer is able to make common sense observations of the uncertainty that his fellow citizens are experiencing with the rapid changes occurring in their daily life because of the new technologies being presented to them. It is because of this uncertain environment ordinary thinkers are vulnerable to forces intent on using a campaign of fear to create doubt in their ability to exercise everyday common sense and critical thinking.

In addition to this book, Archer has published the book, The Trump Effect, Unmasking the Dark-Side Left and Their Liberal Media Parrots in 2018 through Christian Faith Publishing and is available on Amazon, Barnes and Noble, and other book selling websites and local book stores.