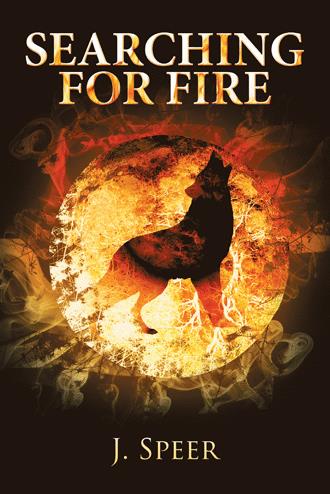 Beyond the fields on a plateau, the Hyaenodon waited and watched the firelights extinguish in the cliff village. Alone in the dark, his eyes glowed yellow in the moonlight. He growled very low. He burst into a rapid sprint and propelled himself off the plateau far above the valley below into the starry night sky. In midair as he fell, he effortlessly shape-shifted into a black raven, swooping low and gracefully over the fields and stream. He landed and shifted abruptly again into a black bear, making a rapid and powerful gait. His name was Hashkeh Naabah, meaning angry warrior, and his abilities were eons upon eons old. As he reached obstacles in his path, he plowed ferociously through them. As he neared the village, he was more careful to be quiet and stealthy. On the outskirts of the village at the base of the cliff where the first ladder ascended, he cleverly shifted again into a black scorpion and moved discretely up the cliff, up and up, ladder upon ladder, past home after home until he reached the family’s adobe hut. The scorpion entered the little room moving across the glowing embers of the remains of the fire. Amid the spiraling smoke, he shifted into a mountain lion spirit.

The big mountain lion purred, brushing softly along the length of the sleeping mother.

“Mistress, wake up,” he whispered.

The spirit of the sleeping mother named Shoshanna rose from her body as well to converse with the mountain lion spirit.

“You know, your son will likely die tomorrow,” said the mountain lion spirit. He was straightforward in his tone, neither aggressive nor pleasant. “I can help you,” he said after a pause. He sat back on his haunches, took a claw, and lazily drew a symbol in the dirt.

“What do you want?” asked the distressed mother, looking at him. She hesitated.

“Just a trifling matter, nothing much really.” He shrugged. He looked her directly in the eyes. His claw stopped tracing in the dirt, and he shifted his weight purposefully forward. “Do you want my help?”
Shoshanna looked at the mountain lion spirit. She looked down.

“Good,” he replied and grinned, tilting his large cat head to the side. “Then consider it done.” He looked down at his paw, retracted the claw, and began slowly cleaning his paw. “I will make good on the bargain at a later time perhaps. You’ve chosen well.”

Shoshanna did not trust the mountain lion spirit. “Fix it,” she said under her breath, and her spirit returned to her resting body. The mother briefly moaned. She shook her head in her sleep ever so slightly and then was still once more.

That night, as the others rested, the mountain lion spirit moved close, very close to the boy. He shifted once more into a humanlike creature. He was pale and gaunt. He looked quite sickly. His hands were claws and his eyes like black voids. He incanted words from an ancient language. Using the symbol drawn into the dirt, he shifted some ash into the circle and then rapidly expelled it out of the circle. Speaking in tongue, he then covered the symbol with white sand. After completing the mysterious ritual, the creature swiftly cleaned up his work. He shifted again into a black scorpion, crawling up the side of the adobe hut and disappearing into the night through a crack in the wall over the door. Meanwhile, inside the hut, no one moved except for a barely discernible movement from the small kachina doll the young sister held in her sleep.

The boy healed. The next morning, he awoke to the great relief of all.
Nights later, the medicine man Sani was alone in his residence when he heard a knock on the left wall of the adobe. He looked promptly around to make certain he was alone. Then he moved a few baskets and rocks in the wall to reveal a hidden tunnel. This tunnel, however, was quite small, too small for humans. Standing in the tunnel was the little kachina doll, a magical guardian spirit.

“We must call the council,” the doll named Yanaha said. “I waited until I could escape and come to you. Something terrible has happened. The boy didn’t heal all by himself. He was healed by one of them—the decayed ones. I fear we are in grave trouble.”

Sani and Yanaha spoke of the events that transpired a few nights before. He told Sani of the mountain lion spirit and the strange humanoid creature, of the incantation, and of the shape-shifting.

“I know,” Sani replied. “We knew this could happen at some point.”

“The people are not ready for this.”

“They will have to be. Call the council.”

The medicine man Sani looked down and nodded. Later, he climbed to the council chamber of the cliff village. He put a sleeping enchantment upon the entire village and called together a meeting of the council, but not what one would normally expect. It was a council of the guardian kachina dolls.

Upon the birth of each baby girl in the village, a special kachina doll was bestowed on her by the medicine man Sani. Little did the girls know that these were crafted magical spirit guardians tasked with protecting the cliff dwellers. They lived in each adobe home as playmates for the girls and secretly kept watch over all activities for the medicine man.

An epic battle ensues between two elemental gods, the Fire Spirit, Ahiga, and Wind Spirit, Haseya. With the help of an unlikely guardian, a young woman pregnant with Ahiga’s child makes it to safety, along with her family, and survives the rebirth of the world. Ahiga, who broke the Elemental Code, is imprisoned deep within the earth.

Due to Ahiga’s actions, other creatures have survived as well, shapeshifters decayed by evil. They should never be trusted.

Many generations later, a young boy named Kokopelli and his sister named Mai rescue a baby from the clutches of the shapeshifter wolf pack, relying on the aid of a wise medicine man named Sani who hides a secret of his own. In order to protect the people of their village hidden among the cliffs, they must undertake a dangerous quest. They journey past the Snake River into forbidden territories and encounter numerous perils. A mysterious figure in the forest will direct their path towards Ahiga. But only time will tell whether they can track down the Fire Spirit in time to save their unsuspecting village community from an impending siege of shapeshifters.

J. Speer is a first-time novelist who works at a frame shop for photography and artwork. She enjoys traveling, cooking, and knitting and is currently remodeling her house while working on a farmhouse out in the country. She lives in Pittsburg, Kansas, with her husband, their two children, and their dogs.