Book 1 of the Counterpoint Series 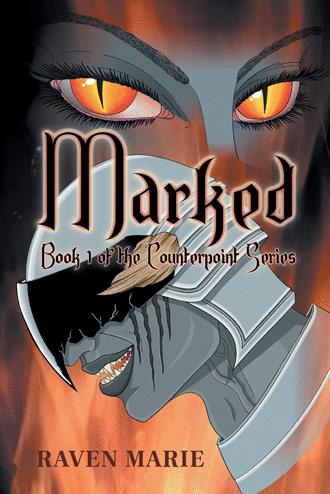 In the darkness, Sebine felt herself return to wakefulness. She wasn't sure just how long she had been sleeping, but it didn't feel like it had been for long. An odd sensation had woken her, a sort of instinctive nagging in her mind that told her something wasn't right. Before opening her eyes, or taking so much as a deeper breath, she listened.
There was nothing. No crickets, no frogs, not even a breeze to stir the branches of the trees. Sebine supposed that it must have been the silence that woke her. Silence usually meant danger. Perhaps the local wolves had wandered into her clearing. She didn't expect they would bother her, maybe take a curious sniff, but she didn't hear anything. No rustling paw steps, sniffing or panting, just the quiet. Sebine curled her hands into fists on her stomach and drew in a calm deep breath.
“Peaceful...” A male voice sounded somewhere to her right. Sebine opened her eyes slowly. “Can't say I've seen anyone sleeping out here before...” Great. Sebine groaned to herself, had one of the party goers really followed her? To her domain. The thought irritated her almost as much as the contacts in her eyes. After sleeping, they seemed to hurt her eyes and obscure her vision even more, blurring everything around her.
“You've got a lot of nerve... following me.” Sebine grumbled crossly as she turned her head on the ground to look to where the voice had sounded. On the boulder, several feet away, sat the man. Sebine squinted, trying to focus through the contacts. He seemed to be in armor, his whole body gleaming metallic silver in the moonlight. If it was one of Jordan's friends, she would make short work of scaring him off.
“Nerve?” He scoffed. “You've got nerve... speaking to me like that.”
“Who are you?” Sebine demanded angrily as she sat up and got to her feet, brushing off the leaves that clung to her dress. Whoever he was, he didn't sound like the drunken fools she had put up with at the party. No... His voice was strong... confident.
“You asked me that once before.” He said smoothly.
“That was you I felt.” Sebine said in an even tone. “Why did you follow me? Usually when someone wanders off into the forest, it's because they want to be left alone.”
“If you wanted to be left alone, then you made one terrible mistake.” The man’s voice lowered dangerously.
“And what exactly would that be?” She growled back, clenching her fists as she glared at him. A rush of unnaturally hot air forced Sebine to blink, and made the contacts in her eyes unbearable. With a pained grunt she covered her eyes with her hand, rubbing the lenses out of her eyes irritably. When she cast the contacts to the ground and opened her eyes, he was but inches from her. Sebine looked up quickly, surprised by how tall he was.
He had to be nearly two feet taller than her, as the top of her head barely reached the bottom of his shoulder, and the armor that covered his entire body was no cheap Halloween costume. No, it was heavy, shining plates of fearsome steel that had noticeable battle damage scratched into the metal. A thick, almost black cape draped down from his shoulders. Attached to his helmet by what looked like a large curved claw on each side, and covering his face from the nose up, was a deep black visor with a jagged edge that followed the line of his cheekbones and came to a point at the bottom of his nose.
“You interested me.” He hissed down at her. Sebine couldn't help but stare. His lips were the same dark gray as hers... his skin... the color of slate... just like hers. She let her eyes follow his strong jaw line, staring at him unblinkingly. When a low growl rose in his throat she drew her chin back and took calm steps away, looking up to the visor that hid his face. As she went still, he stepped slowly around her.
He was nothing like the humans she was used to dealing with. The way he moved... it was so... intense. How his head angled downward to watch her closely, reminded her of a jungle cat preparing to take down its prey. Dominance radiated from him, from the intense purpose and fearsome strength that Sebine could sense in every step he took as he circled her. She tipped her chin down, watching him closely with her eyes. Never before had Sebine found herself impressed by anyone... but he fascinated her... captivated her. It was as though he filled up the whole forest with his presence, demanding her complete and undivided attention.
“Interested you, huh?” Sebine said softly, her aggression quickly melting into curiosity.
“Yes... it's not often I come across another Highborn in this Realm.”
“Highborn?” Sebine echoed. “What do you mean?” At her question, the man stopped in front of her and tilted his head.
“You don't even know what you are?” He took a slow step towards her. Instinctively she took another step back.
“Explain.” She demanded. The man drew his head back in surprise.
“Explain?” The word was an amused growl. His gauntleted hand shot out, closing around her neck in a split second, and trapping her in an inescapable metal vice. “You should have killed those pathetic humans. You may have gotten a taste of your true power if you had.” He slowly pulled, forcing her to take two small steps closer to him.
“What... power?” Sebine gasped, trying fruitlessly to scrape her fingers between his thumb and her throat. Stars were beginning to float through her vision.

One question has plagued Sebine her whole life: What am I? She knows she’s not human. Humans seem scared of her. She’s seen vampires and knows she’s not one of them either. She’s tall, incredibly strong, and has a temper she can’t control. The only person who can calm her down when she snaps is her adopted sister Luna.

Despite the occasional bit of sibling rivalry, Luna has been the one constant in Sebine’s life. Luna is her only friend, and she’s everything Sebine is not. Luna is gentle, small, and soft-spoken and lights up a room with her friendly demeanor. In a repeat effort to help Sebine make friends, Luna invites her to a party, but Sebine’s temper strikes again.

When Sebine leaves, she has no idea that her life is about to take a dramatic turn. She finds herself alone, face-to-face with a man named Ian. He’s even more frighteningly tall and strong than Sebine. Finally, she has found one of her kind, and Ian has no problem showing Sebine just how dangerous she can be.

Raven Marie was born and raised in New York, and she spent most of her childhood playing in the woods behind her house. She imagined worlds of fantastic, frightening creatures that filled her imagination with epic battles and tales of enduring romance. Now, as an adult, she brings those daydreams to life in books with vivid detail and intrigue.