Give Me a Chance

A Primer Advocating for People with Disabilities 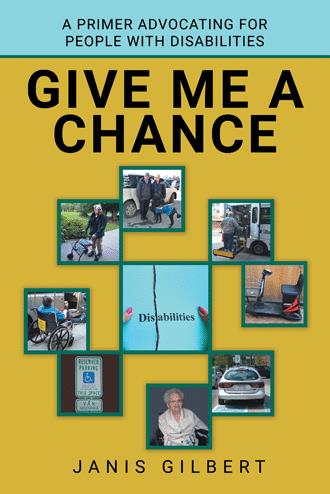 In the past in our culture, (and even today in some other cultures) babies born with physical disabilities are killed immediately. Being a female in some cultures is considered negative or “a disability” and the female babies are aborted or killed. This is the 21st century, yet recently a woman in Afghanistan was killed by her husband because she had borne another female child. He and his mother, who was also implicated in the death, had berated and abused the wife after the births of her first two girls. This is astounding since most of the enlightened world has known for years that the male is the one to determine the sex of the child. Very tragic.

The philosopher, Aristotle, advised getting rid of a child if it was imperfect. Greek law even dictated that a newborn baby was not really a child until seven days after birth so that an imperfect child could be disposed of with a clear conscience. From these beliefs arose the enduring idea that “good” looked beautiful and the deformed and disabled were “bad”.

Classical Roman and Greek art depicted the ideal of the beautiful body in paintings showing perfect complexions, even though most people had impairments and many would have been scarred by smallpox.

In feudal and medieval Europe when there were plagues, pestilence or social upheaval, people with disabilities again were often made scapegoats as sinners or evil people who brought the disasters upon society. During this time, witchcraft was linked with disabled people. There was actually a book written that told how to identify witches by their impairments, by “evidence” of them creating impairments in others, or by giving birth to a disabled child. Between 18-20 million people, mainly women, were put to death as “witches” across Europe during this time. Many of these people were disabled.

Folklore is full of ideas linking disability with evil or a negative connotation. Grimm’s Fairy Tales depicts the witch in Hansel and Gretel as deformed, blind and ugly.

Unfortunately, reality offers many examples of societies exploiting people with disabilities. Circuses and freak shows, pirates depicted as blind in one eye or missing a hand or foot, cartoons that characterized disabled people as weak or powerless, and ‘ships of fools’ where people with mental illness were sailed from port to port and the public paid to come and laugh at them. The “fools” were then abandoned at the end of the tour!

It used to be thought that mental illness was caused by supernatural powers. It was believed that psychiatric disorders were the result of patients being invaded by evil spirits, thus making them evil beings. The curiosity/fear of the different makes the non-disabled viewer feel better about his or her own normality. The highly successful horror film genre is founded on this phenomenon and exploits the stereotypes.

In the Western Judeo-Christian society, the understanding of body differences was found in Biblical references such as “crippled, lame, blind, dumb, deaf, mad, feeble, idiot, imbecile, moron”. Jesus reached out to heal a paralyzed man saying, “your sins have been forgiven you”. From earliest times within Christian thinking, the idea of sin and disability has been linked. The implication is that disability is a punishment for our sins or the sins of our parents and were caused by evil spirits, the devil, witchcraft or God’s displeasure. This phenomenon was frequently called the Religious Model of Disability.

In feudal and medieval Europe, most people with disabilities were accepted as part of the family or group, working on the land or in small workshops.

Western culture has not done a good job of embracing people with disabilities, although they are getting better at it than other cultures. Because of the communist ideology, nations under communist rule promoted a reverence of the healthy, fully able-bodied worker. Individuals who were not “perfect”—those who displayed any type of disability or “defect”--were immediately removed from the general population.

In other cultures such as the Maori in Aotearoa (New Zealand), disabilities are considered a normal part of life and people with disabilities are included, rather than excluded from activities. The Maori’s have a philosophical model of disability activism known as the Social Model of Disability. According to the Social model theory, a person has an impairment and the way that society is set up and organized disables the person with the impairment. Therefore, disability is something that happens to a person because of the social structures that surround them, not something that the person possesses. They believe that to be competitive and effective, workplaces need to ensure they recruit the best person for the job and then retain and develop them. If people are excluded from the job market for reasons that do not relate to their ability to do the job, workplaces will inevitably miss out on skills, talent and energy. Very forward, inclusive thinking.

Managing life with a disability is tough for a child, the parents, siblings, and for the child’s teacher and classmates. Every person, disabled or not, wants to be happy, loved, and respected. They want to be accepted. Parents also desire these same things for their child. But, often, society doesn’t accept people with disabilities.

In Give Me a Chance, author Janis Gilbert offers insight into the world of the disabled. Based on her professional experiences as a special education teacher and a mother of two sons with life challenges, she shares what she’s learned. This guide:

gives an overview of disabilities, defining what they are, how they’re acquired, and provides statistics about disabilities in the United States;

looks at well-known people with various disabilities and how disabilities have been portrayed in popular culture through movies;

covers the history of the treatment of people with disabilities and how it’s changed throughout the years;

examines diagnosis and treatment of disabilities and challenges associated with this work, including shortages of resources;

gives insight into aspects of life for people with disabilities including family and social relationships, education, employment, transportation, housing, and others; and

discusses caregiving, advocacy, community support services through governmental and nonprofit agencies, and planning for the time when parental caregivers are gone.

Janis Gilbert worked in mental health administration for fifteen years after teaching everything from preschool to post-high school classes. She earned a master’s degree in special education K-twelves and taught high school special education for eleven years. Gilbert is the mother of two adopted boys (now young men) with special needs who continue to challenge her. Now retired, she’s active in community organizations advocating for people with special needs and mental health issues.