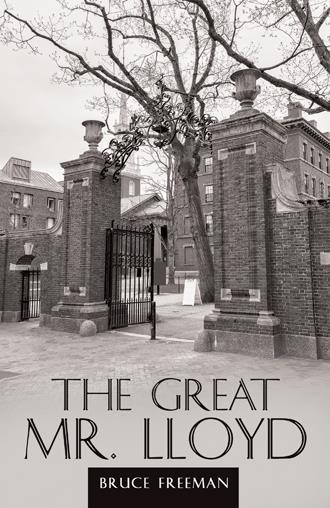 
That morning, Arthur Lloyd listened absently as Dorothy, his wife, addressed him in that stiff-backed way that she had. He paid attention not to what she was saying, but rather to how she arched her left eyebrow, presumably to give the point she was making more gravitas. She was pulling out all the stops. It was something about how Arthur needed to get past Celldesign, a lecture that had become a sort of morning ritual. He had done so, he wanted to say, but her mind was made-up. She did not know it, but decisions had been made, and Arthur’s mind was centered on “the culmination,” as he called it. And that led him back to his grandson, Spencer.
At other breakfasts on other mornings, Dorothy had gone over and over what she thought he owed, or, more precisely, didn’t owe to Spencer. He could see that she still blamed Spencer for triggering the battles over Celldesign and the whole public dissection of the Lloyd family, a painful affair; but he was beyond that. He looked at her: intense eyes, hair pulled back so that it suggested ferocity - she had held up well, but she clearly missed the high perch that Arthur had occupied at Harvard for all those years. Now she saw him as “moping around” the apartment on Beacon Hill, a phrase she reserved for her greatest disdain. Spencer was a convenient target, if nothing else. But Arthur knew better.
Arthur had put together a plan that was quite skillful, neither obvious nor overbearing, something that would reach out to Spencer, that would overcome the damage to the bridge between them that had once existed.
He knew his grandson’s habit of going for a run each morning. Five miles, like clockwork, and always with his phone in his pocket. It was the perfect time to send him a text, as he would be alone, outside the influence of others who would push him away, who might be hard and fast and unforgiving, who would advise him that the chasm Arthur had created could not be bridged. But running along the streets of Boston by himself, Spencer would react differently. That was the bet.
Spencer Lloyd was a Red Sox fan, one of the faithful, but he had never gotten closer than the cheap seats in the right-field bleachers. Arthur was well aware of that when he wrangled tickets from a colleague at Harvard for opening day. He knew that the prospect of seats right above the dugout, where they could see the players close-up, hear their chatter, and feel the optimism of a new season, would be rather enticing to Spencer - Arthur, on the other hand, was not a fan. To the contrary, he looked down on those who would idle away precious time watching grown men play what he regarded as an inconsequential game. The tickets were a pretext for Arthur, merely a means to an end. But that was the whole point.
Still, it was a tall order: the two of them had not spoken in several months, not since they had parted on the courthouse steps. A wall had come up between them; and also between Arthur and his legacy. And those walls seemed related in some way.
Arthur’s text was minimalist:

Dear Spencer, I’ve managed to lay my hands on two tickets, opening day, good ones, above the Red Sox dugout. Would be pleased if you would join me. I hope you agree that we need to get back together. Best, Grandfather.

Arthur’s bet paid off. Spencer texted back right away – agreeing to meet outside the Fenway gate at noon, an hour before the game started, so that they could get hot dogs and beer and watch batting practice.
Alone in his library, Arthur said under his breath, “Good,” although he thought the prospect of a hot dog cooked in cloudy gray water to be appalling, and Spencer would have known that. That should tell him something about how important this is, Arthur thought.

Satisfied that his plan had been launched, Arthur turned from the desk in his study only to confront Dorothy standing silently in the doorway, straight and proper, a look of disapproval on her face, which brought him up short. “Damn it,” he mumbled, loudly enough for her to hear but softy enough so that she could ignore it if she wished. She had been following him around the house ever since the court hearings, and he resented it. And it was worse when, like now, he had something that he was keeping from her.

But he didn’t want her in on this. And at long last, he felt entitled to that.

He hurried unsteadily past her, but no words were exchanged. She gave him a sideways glance, and Arthur returned the favor, mumbling something to the effect that it was “insulting” as he brushed past her, feeling her eyes on the back of his neck as he made his way to the kitchen for another cup of coffee.

The crash of Celldesign—a Boston based start-up specializing in the creation of a gene-editing patch—on the eve of its IPO starts with the smallest of actions: Spencer Lloyd, grandson of the company’s founder, sends an email questioning the data on which the company is basing its claims.

The email triggers an all-out effort to discredit Spencer, putting the great Arthur Lloyd, the company founder, in direct conflict with his grandson. Things only get worse from there, as the company careens into an all-out panic, and Arthur Lloyd falls further and further into cascading conflicts until he loses his bearings, his company, and ultimately, his family. It seems the business world and the moral universe may not be so far apart after all.

Bruce Freeman graduated from Middlebury College, phi beta kappa, and Boston University Law School. He practiced law in Vermont and New Jersey, an experience that suits him well to tell the story of how a high-tech start-up company that aims to change the world is instead diverted into bankruptcy. He currently lives in Naples, Florida.