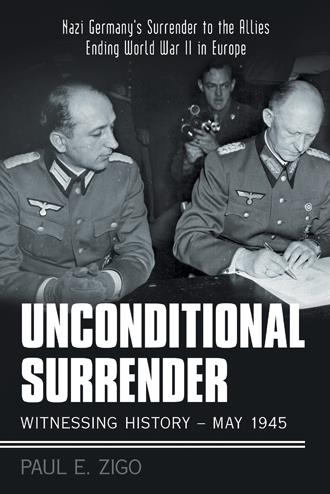 Witness the end of World War II in Europe. For the first time in one collection, famous and never-before-assembled images taken by General Dwight D. Eisenhower’s wartime photographer take you to the schoolhouse turned Allied headquarters in Rheims, France where Nazi Germany unconditionally surrendered on May 7, 1945. Understand the import and impact of this day through narrative by noted professor and historian Paul Zigo and images by former US Army Technical Sergeant Al Meserlin, Eisenhower’s wartime photographer. This powerful journal should be part of every citizen’s library so we can honor and learn from our past.

Witness the end of World War II in Europe like never before with this insightful account filled with images taken by Gen. Dwight D. Eisenhower’s wartime photographer, Al Meserlin, and analysis from one of the war’s foremost scholars.

Paul E. Zigo, a thirty-year Army veteran who retired as a colonel and the founder and director of the World War II Era Studies Institute, takes readers to the schoolhouse turned Allied headquarters in Rheims, France, where Nazi Germany unconditionally surrendered May 7, 1945.

Nothing less than unconditional surrender was acceptable to the Allies, which U.S. President Franklin D. Roosevelt first proclaimed at a press conference in January 1943 following an Anglo-American summit meeting in Casablanca, French Morocco.

Roosevelt and British Prime Minister Winston Churchill vowed to never accept any armistice like that which led to the signing of the failed Versailles Peace Treaty after World War I— and Soviet Union Premier Joseph Stalin agreed in absentia.

Despite defeat after defeat, Nazi Germany leader Adolf Hitler insisted on fighting, and others continued to resist even after his suicide April 30, 1945.

PAUL E. ZIGO, a history professor, author and military historian is the founder and director, of the World War II Era Studies Institute. The institute is dedicated to furthering one’s knowledge and understanding of the WW II era and its impact on history. He is a graduate of Temple University and the United States Army War College. He authored and edited in 2009 Witnessing History: The Eisenhower Photographs featuring all the photos of General Dwight D. Eisenhower taken by his personal wartime photographer, Al Meserlin. Zigo was also the executive producer and narrator of the cable network series Triumphant Spirit: America's World War II Generation Speaks from 2001 to 2004. In 2014, he authored the book The Longest Walk: The Amazing Story of the 29th Inf. Division on D-Day 6 June 1944 and in 2017, he co-authored the book Bataan – When Men Have To Die, an accounting of the fall of the Philippine Islands to the Japanese in 1942. Mr. Zigo is a 30 year veteran of the United States Army retiring as a Colonel and is a founding member of the National Museum of the US Army.