The Saga Begins in Ireland with Ella 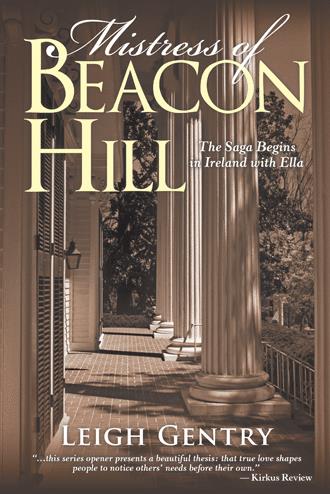 With her trunk and her horses turned over to the ship’s workers, Ella stood with her father at the port of Liverpool. They searched the crowd to find Missus Carrington and her son. Too overwhelmed by her surroundings, Ella missed the gloriously sunny day filled with crisp air. The gulls squawked, dipping and soaring over the bustle of the seaport. Someone approached Ella from behind and spoke directly into her ear.

Startled, Ella turned quickly to be confounded by her face on a male body. Fascinated, Ella gasped and covered her mouth with her hands. His sky-blue eyes twinkled with mischief. The same turned-up nose and full bow-shaped lips were there. His hair, a tinge darker than her shade of blond, reached his shoulders. His features, being bolder than hers, made him unquestionably masculine. She found him quite handsome.

“Aye. Lochlan Carrington, m’lady,” he said as he bowed.

“My mother told me we looked alike as babes, but I had no idea. We could be twins!”

“Oh, Arrabella, this is such an adventure! I cannot comprehend it! We’re crossing the Atlantic Ocean to live in America! What a dream come true this is for me.” While Graeme looked on, Lochlan spun her around. “Let me look at you. You’re quite lovely, and the gent who’s won your hand doesn’t know yet what a prize he has in store.

We’ll have such fun, lass!”

“Lochlan, I’m glad you’re so excited, but I must know if you’re sure you can handle helping with the horses.” Ella’s responsibility for her hooved charges came first.

“Of course, I can, Arrabella. How hard can it be?”

“Have you seen their size? Over seventeen hands, they are, with enormous girths! I selected the largest of the Irish Draughts I could find in our stables. They’re already aboard, or I would point them out to you. We’ll see them soon.”

Because there were three of them in addition to the animals, Uncle William could only afford second-class accommodations. Ella did not mind a bit. If she could get to the horses, she’d be happy. It was only for a brief time anyway. She believed a body could handle almost anything if an end were in sight.

“There’s my mother, Arrabella. It’s time for us to board. Let’s go! Let’s go aboard!” Lochlan’s genuine excitement shone through. “Good-bye, Mister McCarthy. I promise to take excellent care of your daughter.”

Ella panicked, feeling pure fear for the first time. This is really happening! I’m moving to America! I’m leaving my family! “Father!” she cried, reaching for Graeme. Her heart lurched. Her face felt enflamed as tears pricked the back of her eyes.

Her father pulled Ella to him one last time. Graeme’s voice was gruff with emotion. “Go, Daughter. Go, my beautiful girl. Arrabella, go with our love and our prayers for your happy life.”

Lochlan grasped an emotional Ella by the hand and pulled her from her father. Graeme’s arms were now empty but he felt a far greater emptiness deeper inside. He wondered how something empty could hurt so badly. He would watch the boat sail before journeying home to his wife and nine children.

Ella boarded the White Star Line ship, The Teutonic, with Lochlan holding tight to her hand. They found Aine and located their sparse accommodations in the aft. Naturally, Ella set about finding the horses right away. If they weren’t aboard, she intended to go ashore to find them.

She knew the horses were to travel in the freight section. After asking for directions, Ella and Lochlan received instructions to proceed through the steerage compartment. That was the only way to reach the animals. Along the way, Ella and Lochlan found the accommodations in steerage rather appalling. There was little to no privacy. Working their way through the mass of people in steerage, the look-alike cousins wordlessly appreciated their tiny, sparse cabins.

It took a bit of time to reach the big horses. Once there, Ella talked to each one and assured them they would reach their destination soon. With their Irish pedigree, they were bound to make history in America. All they had to do was get to Kentucky. She, of course, felt most concerned for Eternity, her very own horse. Ella would be content if he tolerated the trip well.

While Ella instructed Lochlan about caring for the animals, a man calling himself Fletcher approached asking what they were about. He declared he worked for the steamship line as a steward, taking care of the steerage passengers. She could smell his stench of body odor mixed with spirits. This man, Fletcher, is standing far too close to me. I dislike the way he keeps calling me ‘pretty little thing’. One would think he is my betrothed. How I wish Lochlan would reprimand the man! Setting eyes on her cousin, Ella immediately understood why he did not. Oh, dear me. Lochlan looks a mite green.

Lochlan, oblivious to Ella’s disconcertment, felt his own considerable unease at that moment. The movement of the ship stole all his focus, and they were yet to be underway.

“Ella, I think, perhaps, uh, we should return to our staterooms.”

“Of course, Lochlan, as you wish.” After being assured now of the welfare of her horses, her next goal was being rid of Fletcher.

Back in his cabin, Lochlan expressed his need to lie down. “Ella, you must stay by my mother’s side until I feel well enough to be up and about.”

Learning her father’s uncle has asked for her to come to America and be his sole heir, seventeen-year-old Ella McCarthy should be flattered and excited. The circumstances, however, are quite daunting. She must leave her loving Irish family to marry her uncle’s neighbor’s younger son, Sean Brannock, and oversee his horses at a place called Beacon Hill. She is to bring Irish Drafts from her grandfather’s stables to breed with the fine Brannock Thoroughbreds thereby producing versatile Irish Sport horses. Everyone thinks this is a grand idea. Ella, however, cannot help feeling she is being bartered in some land and horse deal.

Embracing her fate, Ella boards a ship to cross the Atlantic. In 1897, the voyage holds enough travails to last her a lifetime. When her horse’s hooves are on terra firma, she is sure things will improve but bad news awaits. Her father’s uncle has died. In his stead, the gentlemanly Brannock brothers are there to escort her to Kentucky.

Padraig, the older brother, assures her the wedding will take place. While seeing to her every need, Ella finds him authoritative, taciturn, and a bit prickly. Along the way, Sean, her fiancé, confides he has no desire to marry her. Despite this, affable relationships are formed.

Over the coming months, years, and decades as mistress of Beacon Hill, Ella meets heartache and happiness in her own indomitable fashion. Follow her as she finds her own way and forges a legacy for future Brannock horsewomen to follow.

Leigh Gentry, according to her genealogy, was born in the same North Carolina county her ancestors settled in back in the 1700s. She pulled up extraordinarily deep roots when she married a Naval officer. Following her destiny, she now lives with her husband and cocker spaniel in her own old Kentucky home.