The Crash of Apollo 11 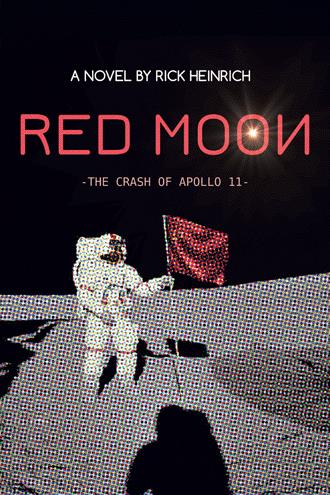 The maneuver was about as brisk as they had expected, and both astronauts held on as they caught their first close in views of the Sea of Tranquility fifteen-thousand feet below them, and made out their landing site ahead. The lunar module automatically throttled back to increase the rate of descent.

‘Wow! Look at that! We’ve got the whole area ahead!’. Aldrin was excited and could see the landing spot out of the triangular window. The descent engine was thrusting at a consistent 12% power, but began to slip downwards to 11%, and then 10% without either astronaut making a corresponding control input.

‘Ok, rate of descent increasing’, Armstrong said as coolly as any test pilot faced with the unexpected. ‘8% thrust now, it’s not enough power and descent is too high’.
Aldrin called the altitude: ‘ten-thousand feet’. There was enough time for a question between the two astronauts.

Armstrong asked: ‘5%. What do you think?’. Aldrin thought quickly as he could feel the slight downward acceleration as the lunar module barely thrusting was being overcome by gravity; the vehicle was far out of nominals for this phase of flight.

‘Neil go to P66 before abort and see if you can get it back’. Aldrin wanted Armstrong to try and save the landing by selecting program P66 and taking manual control; then they could increase throttle and reduce their rate of descent. They had eight-thousand feet of altitude below them.

‘Ok’, Armstrong said automatically, ‘we’re in ‘66’. Immediately Armstrong flicked the rate of descent paddle lever in his left hand up to +5 feet per second, which should have resulted in a firm increase of thrust to dampen their descent.

‘3%…. 2%…..1%’, Aldrin said as he read from the guidance computer in an increasingly alarmed voice, tracking the falling thrust towards almost nothing. Suddenly the fast rising lunar surface didn’t seem so inviting for them. ‘What’s happening!? We haven’t lost the engine – it’s still at 1%’, Buzz said with the first feeling of panic in his voice, ‘this has to be a guidance software issue messing with the engine thrust’. The only other thrust the astronauts could bring to bear was the reaction control system, but that was only for the rotational or minor lateral adjustment of the vehicle; right now they needed a consistent thrust vector down towards the lunar surface to minimize the fatal and unabated descent speed.

In mission control the panic was increasing at the same rate as the lunar module was descending to the Moon’s surface. ‘Goddammit! Neil abort that sucker’, Deke Slayton was saying while standing over capsule communicator Duke and firmly gripping his shoulder. It was a statement for his own sake and not something that needed to be relayed onto the crew. They could all hear Armstrong and Aldrin working the problem. An abort seemed the only option right now and it was only a matter of time before one of two things happened: a safe abort or a crash – a landing didn’t seem possible anymore to the mission control team.

When activated by an astronaut or through certain parameters automatically, the abort sequence for the lunar module jettisoned the descent stage from the ascent stage, the latter which propelled the crew cabin with both astronauts back into a lunar orbit to rendezvous with the command and service module above. The process took mere seconds once started.
‘Houston this is Eagle we are aborting the landing’, Armstrong said as he immediately twisted the gray abort handle ninety degrees anti-clockwise. Aldrin was watching with bulging eyes and glad that now in the slipping grip of death Armstrong had made the abort decision as commander.

There was an audible bang through the spacecraft as the explosive bolts below initiated and the ascent stage separated cleanly from the spidery descent segment below them. The ascent stage should have accelerated straight up but instead started to roll violently forward as the abort guidance system entered a radar tracking program and searched in vain for the signal from Columbia. As the vehicle was traversing through full revolutions the firing engine couldn’t orient sufficiently to stop the downward trajectory towards the lunar surface and they remained in the same dangerous situation. Both astronauts knew the violent pitch forward rolling was wrong, but hoped in vain that the spacecraft would right itself and head towards lunar orbit. Aldrin was knocked out of his suit harness and collapsed into the right hand side of the crew compartment as Armstrong stayed standing and gripped the hand holds hard. The last communication from the crew came through from Armstrong: it was the first real panic that mission control could detect: ‘Houston!, we’re in a violent positive pitch roll!, the AGS… th- there’s an error. Standby...’. Flashes of black space and white lunar surface filled his vision as the astronaut closed his eyes for the imminent impact.

From the surface of the Moon it would have looked like a relatively survivable impact, but in fact the lunar module ascent stage bounced hard and burst as it depressurized in a shower of oxygen and propellant gas, gold foil and debris, reaching upwards of 50 g’s as it hit. The light 1/6th gravity of the Moon and forward velocity vector caused a significant rebound into the lunar sky, also picking up a high arc of talcum powder like lunar soil that lingered sparkling under the intense sunlight before settling uniformly and quickly in the airless atmosphere of the Moon. The pieces of the destroyed lunar module ascent stage finally came to rest in a debris field seven-hundred feet long fanning out into an arc from the point of impact.

‘Eagle this is Houston. Eagle, Houston, do you copy?...’, Capsule communicator Charlie Duke tried. Flight surgeon William Carpentier was staring at two screens that were both flat lining, but then all telemetry from Eagle had ceased on impact. After three minutes of unanswered calls Gene Kranz gave the order no flight director wanted to give: ‘Lock the doors’.

JULY 1969. Apollo 11's lunar module Eagle has crashed against the Sea of Tranquility killing astronauts Neil Armstrong and Buzz Aldrin. As Michael Collins returns to Earth alone, the country mourns and then demands answers; NASA and the United States space program is thrown into turmoil.

ON the other side of the world the Soviet Union re-energize their own lunar program and race to launch a mission and upstage the wounded Americans - but can they navigate their own political and technical challenges in time?

WHO will win the race to safely land a man on the MOON?

Rick Heinrich has worked as an army intelligence officer and a political diplomat, with extensive experience representing Australia abroad in both fields. Whether it was with a combat unit in Afghanistan, or an embassy in Iraq or Indonesia, Rick has enjoyed tending to his interests in astronomy and writing, both of which have born a labor of love in the form of his first novel Red Moon.