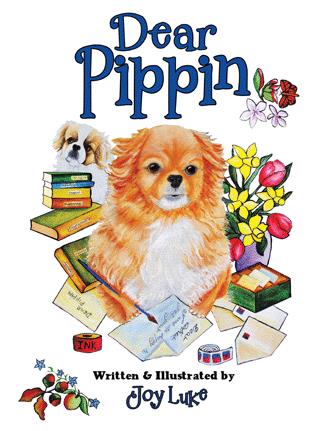 In this book Dear Pippin - Pippin is healthy, happy and has lots of friends.

After writing so many helpful letters to friends and making lots of new friends, Pippin was encouraged to become a writer and spend his days helping others.

Pippin wrote to his friend Arthur, who was lonely, after he moved away to a new place.
I know you will make friends when you go to your new school.

He heard from a little Owl named Oliver, who was not doing well in school.
All my life, my parents and grandparents have told me that Owls are wise. At school I get confused with some of the lessons and it makes me feel that I am not as clever as other owls.

Pippin found someone to help Oliver with his lessons.

From his friend Arthur, he learns of a little pig named Charlie whose parents are separating.

Arthur wrote: He told me his name is Charlie and he is afraid because he has just learned that his Mommy and Daddy are moving to new homes in different parts of the country.

Charlie knows that when he stays with his Daddy, he will be very close to his Grandma and Grandpa and be able to visit them frequently. They love Charlie very much.

After a period of time, Pippin received another letter from Charlie telling him that he was getting a new daddy and a new brother and sister.

I am writing to you from my Mommy’s home. I always feel so happy here, but once again I am feeling a little frightened. My Mommy told me that I now have another Daddy. I do not have to call him Daddy. I can call him John.

Yesterday, when I met John for the first time, I told him he is not my Daddy. I will listen to him and try to make him like me. I also met my new little brother and sister, James and Poppy. I really did not want a brother or sister and now I have both.

I still have my own special room with all my own toys and games. Mommy tells me that it will be mine forever. Thank you for listening, Love, Charlie

Pippin wrote to Charlie to cheer him up:

You will never have to be lonely again because you will always have someone to play games with and talk to. Since they are younger than you, you will be able to help them with their school work, and they will see that you are a very clever big brother.

My new brother and sister tell everyone that their big brother helps them with their homework and plays games with them. They seem to like me very much. I am really getting used to having them around and when I go to Daddy’s home I actually miss them.

One morning, just as the sun was rising, Pippin went padding out into his garden. He was still a little sleepy as he wandered slowly through his orchard, looking at all the fruit growing on the trees. Suddenly, he was startled by a soft whimper that came from where pretty flowers were growing. Pippin stopped and listened. Slowly he peeked through the flowers and saw that a tiny little Puppy was hiding under a lemon tree.

The Puppy told Pippin a sad story about being left alone without any food, water or friends. After hearing the Puppy’s story, Pippin invited the Puppy to go back to his home.

The little Puppy was bathed and his beautiful coat brushed until it shone. He ate a large bowl of delicious food. Pippin curled up beside him, and soon they were both fast asleep.

Pippin and his family decided they would adopt the little stray Tibetan Spaniel Puppy. They named him Sparrow because he came to them like a little bird who fluttered down from the Lemon tree. 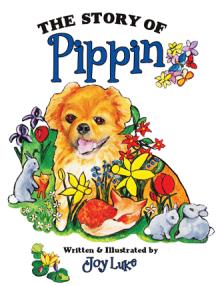 In this era of electronic communications, the youngest of children can literally hold the entire world in the palm of their hand.

Through the colorful illustrations, stories and questions, parents and grandparents, can learn to listen and communicate with young children and create a dialogue to alleviate fears.

Dear Pippin is the second in the Pippin series. Through the friendship of two little dogs, it covers topics such as moving away from friends, starting a new school, divorce, living in two different homes, the blending of families, difficulty learning, disabilities, and adoption.

Each story ends on a happy and positive note.

The Pippin books are warm with loving wisdom. You should meet Pippin. He is a snuggly, wise empathic dog who knows how to listen and write a good letter. A little dog and his animal friends address subjects like illness, moving, divorce, and the blended family. This is a gentle and hopeful book and gives the reader words to explain their feelings. Each story ends on a note of hope. Any youngster will benefit from meeting Pippin.
—Gertrud Mueller Nelson, author and illustrator, To Dance with God. Here All Dwell Free. A Walk Through Our Church.

Joy Luke’s Dear Pippin encourages children to talk about life challenges and changes facing kids growing up today. Headed up by two charming Tibetan Spaniels, Pippin and Sparrow, the cast of lovable animal characters model empathy for others and a positive approach to facing problems such as moving away from friends, parents who divorce and remarry, and living with disability. Sure to appeal to animal-loving kids, Joy’s delightful illustrations are a visual treat.
—Susan Waller Miccio author of The Tibetan Spaniel—A Gift from the Roof of the World and the Abby Swann Mysteries, Tales of Tibbies

Joy Luke spent her early childhood on a farm in the rural West Country of England. She was an only and lonely child. She loved all the farm animals, and from a very early age enjoyed drawing and painting them.

She delighted in the stories of Beatrix Potter and searched for the characters in Kenneth Grahame’s The Wind in the Willows. Due to her isolation, she became an avid reader and collector of books.

Joy Luke moved to the USA in 1969 where she created an international fine arts gallery. She has spent her adult life involved in the arts, teaching continuing education courses and fund raising. Due to her interest in art, in gardening and flowers, she developed an interest in fine porcelain with floral decoration. In 1991 she founded the Pickard Collectors Club. After retirement, she moved to northwest Florida where she spends her time painting, writing children’s stories and working in her garden.

Her beloved little Tibetan Spaniel dogs, Pippin and Sparrow, are real and the facts of Pippin’s illness are true.

Joy is also familiar with fighting for good health. As a cancer survivor, she has great empathy for all who are fighting for better health – especially those battling childhood illnesses.