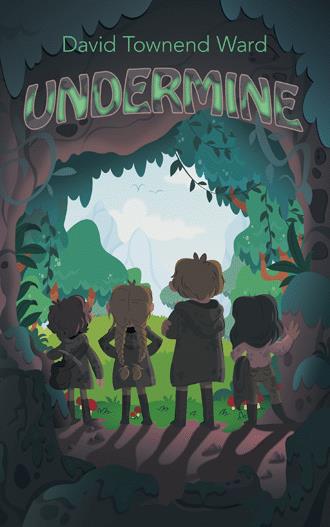 Harold and his ragged scouting party patrolled the woods for the greater part of the day. The ambassador made it clear that something would happen soon and the forest was the area on which to keep a vigilant eye. Twice Harold checked his mount ready to turn for Ager when intuition kept him moving forward, exploring deeper parts of the woods. His men, while nervous, never complained and proved remarkably stealthy. Now as the last light of day waned, the forest darkened and the guards of Ager turned their mounts towards home.

At the gate of the forest, the opening of the woods where tall trees formed an archway of branches, Harold paused and held up his hand. The road narrowed here before it entered the trees and disappeared northwards into the heart of the forest. The others stopped and listened. Something was coming from the darkness of the trees. Hooves thudded on the dry forest floor and a strange creaking and rattling sound filled the hollow with cacophonous ruckus. Whatever it was – it was in a hurry.

Harold quickly ordered his band into two groups, one on either side of the gate, ready to spring after whatever came hurtling from the woods. His sword glimmered under the early moon and the man beside him gave him a grim and readied nod. They had yet to face an enemy and each of them nervously tightened their horses’ straps and drew out their makeshift weapons.

“Wait for my command,” Harold whispered.

The little band crouched low in their saddles as the noise grew louder. Suddenly, a shadow shot into the moonlight, a horse and wagon bumping and rattling, barely upright on the dirt track as it hurtled towards Ager. A heavy canvas flapped in its wake revealing in glimpses the contents of the wagon. There were several shadowy figures hunkered down and clinging to the sides for dear life. The driver wore a tall hat and hollered encouragement to his straining horse.

Hardly had the mysterious vision passed them when two mounted riders came flying out of the forest in rapid pursuit. Harold didn’t hesitate. “Ride!” he shouted and kicked his horse into a run, quickly outdistancing the farmers and their plow ponies.

Harold caught up with the first man just as he came even with the wagon. The soldier prepared to leap from his saddle and onto the shuddering cart, his sword held high and ready for murder. One of the occupants in the wagon screamed and to Harold's horror, he realized they were children. With a mighty swing, the flat of Harold's sword smacked the soldier's legs from underneath him. The man sprawled backwards, his head hit his own horse's boney rump with a crack and he fell to the ground like a crumpled spider. The second horseman swung one leg over the saddle and reached for the cart.

Axel and Mirror pulled back on the silk sash they had lashed between two wooden stays until it reached their chins. At the center of their improvised slingshot was a metal hammerhead the size of a grown man's fist.

The cart swerved and the soldier’s shape disappeared for a moment. A second later and he wheeled back, the shadow large and looming with one arm stretched out – reaching - reaching towards them. “Now!” Axel yelled. Too late the man realized what was happening and tried to retract. The hammerhead struck him in the face with a crack and he disappeared into the night.

Axel and Mirror peered into the dim and dust to catch a glimpse of the fallen man. “Good shot,” Mirror panted. “But you underestimated the tension in the silk. Just look at it.” Their silk slingshot was torn in half.

“You underestimated the weight of the hammerhead,” he retorted.

She gave him a quick smile. “It worked.”

Harold reached the carthorse and took hold of the bridle, the bit and straps now covered with the poor beast's foam. Its eyes were wide and panicked. Harold spoke calm words and between his own horse and the driver pulling back on the reins, the wagon began to slow. A hundred strides later and the wheels came to a stop. Above the panting, stomping animals, Harold called out to the driver. "Prospectus! What in the name of heaven is going on?"

Thirteen year old Axel and three apprentice engineering friends must use all their inventive skills to rescue their city from the most dangerous enemy their world has ever faced.

David Ward is a professor and a writer of fantasy and fiction for children. He lives and writes with his family in British Columbia Canada.