Every Scar Tells a Story 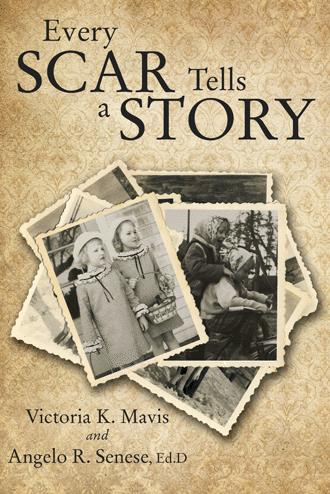 After supper, Liz and Carla reconvene in the living room, and Patrick joins them after bringing Liz’s luggage in. He is intent on discussing his family's reaction to her scar. “You know, I’ve seen your handicap for years,” Patrick starts, his voice breaking. “But seeing your scar shifts my perspective about the tragedy you suffered.” The room seems to ache as he speaks. “With your head tilted that way, you look identical to my mom the day before she died,” Patrick says.

“It's been a year, almost to the day. That may also be why the kids reacted the way they did; perhaps they're reminded of their grandmother and her last days with them,” he says.

Liz considers that. How could I have been so self-absorbed that I again failed to consider the emotional impact of my actions on others? I never meant to hurt Carla or her family.

Patrick interrupts her thoughts. “Liz, I find it amazing that you could hide the trauma over all those years and gracefully share your tragedy now.”

Liz simply nods and looks at her feet. I don't think hurting others is considered graceful.

“Liz, maybe you can talk to the kids about why you decided to shave your head,” Carla says. “That way they can understand and not worry about your health.”

“I have a few hours of windshield time tomorrow as I drive to Mom's; I'll think about what to say,” declares Liz.

“Tell them the truth,” Carla says. “They're mature enough to handle it.”

Liz wonders, Which version of the truth; the one I’ve told for years, or what I believe really happened? She responds carefully. “I'll have a chat with them when I return from Mom's. Now I've got to get to bed, if' I'm going to be on the road early.”

Liz stands to leave, and Carla pops up and says, “I'll go with you. I still have to get the futon ready for you in Patrick's man cave, and make sure all his girly magazines are put away.” She shoots him a flirtatious glance as she walks by, and Patrick pats Carla’s butt.

“With you by my side, Babe, I don't need to fantasize about any other woman—real or in those magazines,” Patrick says.

Carla rolls her eyes and says to Liz, “Patrick only says that kind of stuff when you're here, so someone will believe his lies. Everyone else knows the truth.”

The girls laugh, and Liz limps over to Patrick, leans over, and whispers in his ear, “I know you treat her like a queen.” Then she follows Carla down the hallway. While Carla makes up the bed, Liz ponders, Should I ask her one more time about the accident?

Carla asks, “Is there anything else you need, Liz?”

“Nope! Everything is great, Carla.”

Carla hesitates. “Liz, about your accident—”

“Either now or in the past, I've said everything I can about it. At this point, you know where to look for any other answers. However, be careful. What you seek to uncover may cost you in other areas that you're not ready to deal with.”

“That may be, Sis, but I need to put it behind me once and for all. Nothing else I’ve tried over the years has worked.”

Carla nods. “I do understand. One day, several years ago, I sought answers to my own childhood traumas. What I realized later was that I had been depending on others to fix it for me, waiting on those who caused me harm to say ‘I'm sorry’ or to visibly hurt as much as I had ached inside over the years. But that's not the way life rolls.”

“What do you mean?” asks Liz. “People are supposed to realize their mistakes and fix them.”

“You always start that way whenever you're going to spew your 'older, wiser' crap on me.” Liz smiles. The sisters laugh and hug. “But seriously, Sis, how did you resolve it?” Liz asks, releasing from their embrace.

“One day I realized that some people can't say ‘I'm sorry’ or talk about the past for whatever reason. Maybe it's because if they had to admit what happened to the person they had harmed, or face the outcome of their actions, they couldn't live with themselves or have a relationship with that person because the guilt would be too great,” says Carla.

Liz thinks, THAT's why we can never talk about it. If what I believe could have happened to cause my accident really did occur, then I wouldn't have Carla in my life, and she means the world to me. Tonight confirms that I need to leave certain ‘sleeping dogs lie’.

“I had a choice to make the day I faced my past,” Carla continues. “I could either continue to be a victim of it, or I could decide it was time to move on. It took me several years from that moment of choice to overcome the tragedy of my past, but when I did, I was stronger for it.”

“I never knew that, Carla.”

“Why should you? You've had your own issues to overcome, and I didn't need to burden you with mine.”

“Yes, we are, and I love you for that. However, healing your past is always a journey-for-one. If you take anyone with you, they only become a prisoner. You're the only one who can make the choices that will lead to your inner peace.”

“Liz, the only advice I can give you is this: The journey is dark and difficult at times. You can either get sucked into the past, and it gets darker and more difficult, or you can choose to walk toward the light found in the future. At the start of each day, you're the one who gets to choose. I hope you choose the light.”

Liz bows her head and tears well in her eyes. Putting her arm around her sister, Carla says softly, “I wish you speed on your journey, Sis. I know it's been a long and bitter road for you.” She hesitates. “Sometimes the forgiveness we seek is from ourselves for our choices and reactions. However, we don't see it that way as we are blinded by the actions of others.”

With tears streaming down her face, Liz looks deeply into Carla’s sea blue eyes—a reflection of her own. “You mean the world to me and always have. I'm so proud to be your younger sister.”

“And I so enjoy being the older, wiser sister you idolize!” —Liz smirks.—“Now, it's time for both of us to go to bed.”

“That’s because I am—just not yours!”

Lying in bed that night, Liz focuses on what she needs to discover that will put an end to her nightmares. She hopes that a final visit to the scene of the accident—the barn—will help her remember that day and know the truth of her story; rather than feeling she is telling a lie when she recounts the fabricated version created from partial tales told to her by family member over the years. Her biggest hope in resolving the past is to be empowered going into the future, including a new way to respond when people ask, “What happened?”

Fifty-four-year-old Liz Harris is smart, talented, and nearly broke. In desperation, she turns to life coach Rhonda Jackson, whose business is thriving, even though her personal life in not. Can Rhonda help—or will she be stopped as others have by Liz’s halting gait? Unnerved by her visceral reaction to Liz’s disability, Rhonda pushes beyond her own tragic past as they launch a mutual journey to rise above the hurdles to their success.

As Liz starts to resolve her inner conflicts: feelings of rejection, self-doubt, and inadequacy stemming from a childhood accident that left her reliant on a metal crutch to walk; she identifies events that strained the relationship with her adopted parents, doomed her marriage, and stalled her career. However, she’s unwilling to reveal the secret that can set her free, because doing so could irreparably damage the relationship with her sister, Carla. This denial halts her work with Rhonda and breaks their relationship.

Accompanied only by Steve, her forearm crutch, Liz sets out on a sixteen-hundred-mile trip to lay to rest the horror of her childhood trauma, hoping to end the haunting nightmares and transform her innermost resentment for the life she dreamed of—but could never have due to her disability, into one filled with peace, self-fulfillment, and promise for the future.

Inspired by life, the characters share insights to overcome daily adversities that inadvertently or unconsciously place roadblocks for success through one woman’s journey to triumph over a crippling childhood trauma that caused her lifetime disability, thus unleashing her true potential—and possibly yours!

Victoria K. Mavis is a speaker, author, and human resource expert. At the age of four, she had a tragic accident that left her partially paralyzed, resulting in a lifelong walking disability. Despite her reliance on a metal crutch to walk and awkward gait, she has a lifetime of conquering great odds and success in a world not built for those with disabilities. She currently resides in Arkansas.

Angelo R. Senese holds degrees from Central Connecticut State University, Kean University, and a doctorate in Educational Leadership from Nova Southeastern University. He has over 45 years of experience as a teacher, coach, and school administrator. He teaches in the College of Education in Professional and Secondary Education at East Stroudsburg University in Pennsylvania.