The Eagle in Green Man’s Clearing 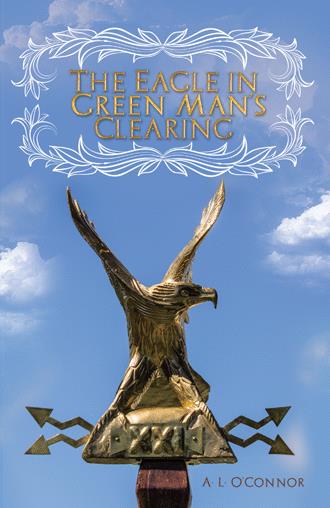 The night began to get progressively colder as time went on and the Romans made it back to camp in record time because of it. They arrived at first watch and saw Grex and Titus on duty. “Where have you been all day?” Titus asked.

“We’ve been out looking for the two girls that eluded us on Samhain. We found them at their farm to the west of Gosbecks. I’ve made arrangements to stay there for Fullo and me. Now I need to get places for all of you to stay to get out of our campsite tents and into houses that are more comfortable,” Quintus said. “The place to start would be to ask at the tavern to find names of suitable homes to pair everyone else off.”

“Good to hear, I would like to be able to feel my feet at the beginning of day instead of the blocks of ice I’ve been waking up to,” Titus replied.

“Funny smart ass,” Fullo grunted. “This is just like the last winter in Gaul we camped, waking up with frost on the blankets; we had no place but the camp to stay in. You whined back then too.”

“We are lucky to have places to move into in Gosbecks, we just need to get that set up the right way, with the locals’ permission.” Quintus said.

“Where do we get their permission from?” Grex asked.

“From their leaders, I can talk to Oisin at the tavern first then go ask the other leaders like Cathmore. It will have to wait until morning though, I am tired tonight and would like to sleep in my cold bed in the tent,” Quintus replied.

“You think you’re tired? I have stiff hands from holding the reins in the wind tonight, and a tired seat from riding all day long,” Fullo laughed. “Too bad we couldn’t go to the tavern tonight and take a little of that ale. That should loosen up my joints a bit.”

“It is a little far to walk so you’d have to get back on your horse but I’m game if you want to,” Titus said.

“What about your turn to do guard duty, you’ve got first watch with me,” Grex put in.

“Maybe I’ll be able to switch with Rufus and do second watch,” Titus said warming up to the idea.

“You’ll do the first watch tonight Titus,” Quintus said putting an end to the discussion, “I’m turning in to bed. Fullo you should too and get some rest for your turn at fourth watch with me in the morning. So if there isn’t anything to report tonight I will turn in and go to sleep.”

“Good night sir,” said Grex and Titus in unison. Fullo just turned and followed Quintus back to their tent. On the way there Quintus stopped by Bundarus’ tent to check on the goings on at the camp.

Bundarus said: “It was quiet this day in town; we just did the daily shopping and checked in on the tavern owner for news. We found tomorrow is market day so it will be a good opportunity to talk with more local merchants about the mill and possible roads and bridges.” Quintus could always count on Bundarus for thinking about Roman interests. It was why he liked to talk with Bundarus before the others with their self-interests. He thanked Bundarus and left his tent. Then he went to Faber and Coriaro’s tent. They reported the same as Bundarus and had little to add to the goings on except that the man who died on Samhain was the only blacksmith for the area. That was an important bit of information for Quintus because with Faber’s’ former background as a blacksmith it would be an advantageous thing for them when they returned in the spring.

“Let us go to bed Fullo, tomorrow will be another day.” Quintus said tiredly.

The next morning they all had their morning meal at the tavern. “Fullo and I will be packing up our camping gear and moving it to Bebhinn’s farm. It is located on the west side of Gosbecks, follow the main road until you get to a lane branching off further west. There is a large oak that you can use as the marker. It is surrounded by crab apple trees. Take the lane up about two mille passuum and veer to the right. The lane will end at Bebhinn’s farm. If you need to contact me you’ll find me there.” All of the men nodded.

“What should we do today?” Asked Grex.

Quintus looked at the men. “Since we’ll be breaking up the camp soon start the process of getting ready. You might want to bury all waste products. It will keep you warm at least. Every man is responsible for his own waste removal.” The men all groaned in response to that. The burying of their waste products was the one duty every soldier had to perform but they all hated it.

“At least you will be dealing with the same stink Coriaro.” Fullo laughed. “I’ll be leaving with Quintus and someone else will be burying my waste.”

“We’ll be doing all of our own before we leave Gosbecks for the farm so that’s fair Fullo.” Quintus said.

Coriaro just shot Fullo a dark look. “You’ll be burying the piss you are so used to smelling. It should be like a home coming for you.” He grinned triumphantly and laughed at Fullo’s comeuppance.

“Everyone keep your eyes open and your ears to the ground when you have dealings with the people here in Gosbecks. I’d like to get at the end of that Samhain mystery of the human sacrifice. Even one human sacrifice by the druids is one too many. The gods here must be blood thirsty.” Quintus said darkly.

The Romans come to Britannia with one mission: settle their people and add Britannia to their ever-expanding empire. In first century AD, centurion Quintus Agricolanus travels to Gosbecks. Power-hungry Rome seeks to make Gosbecks a colonia for retiring soldiers but must first clear out its current occupants.

To achieve this, they enter into treaties with local Celtic tribes, but these treaties are heavily slanted toward the Roman government and levy unrealistic taxes on the indigenous people. Beyond the Celts, the Romans must also deal with the Druids of Britannia: religious leaders that act in judicial roles.

The Druids are a serious source of potential problems, so the Romans strive to stamp out this priestly class. However, they do not manage to kill all of them, as some Druids escape to spread word of these horrors. The Romans hope to establish their colony by changing the native people—but will they end up changed instead?

A. L. O’Connor is an Air Force brat who lived in five countries. She has a BA in history from the University of Texas, along with minors in German and classical civilizations, with an emphasis on Rome. She has lived in Izmir, Turkey, and explored ancient Roman and Greek ruins.