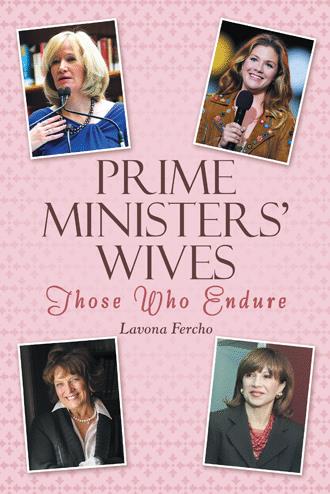 The media corps were intrigued with each prime minister’s wife for the duration of their term. They were capable of exposing how each wife coped with perceived conflicts or intrusions they faced. Challenges were not faced privately. Readers loved topics of personal and critical reviews. A zealous press was accused of relishing or even manipulating repercussions. Wives soon endeavored to work with the press or go private.

Mila Mulroney experienced both the highs and lows from media attention during the almost nine years her husband spent as prime minister. She was once seen as the perfect politician’s wife. The press became enthralled by her charm, wit, and speaking skills and flocked to her press conferences. She could do no wrong. She was later forced to avoid the press and sought privacy when the adoration turned to extreme disfavor when she was labeled self-seeking and extravagant.

Laureen Harper established a reciprocal fellowship with the media, gaining considerable respect during the near decade her husband was in office. She sent routine flash emails and held invitation-only, press corps garden parties at 24 Sussex Drive. When an uncorroborated article of infidelity, of her having a relationship with a female RCMP officer appeared in a local newspaper, the stunned media corps reacted. Thinking the report absurd and improbable, with the exception of one small publication, all declined to pick up the story and it soon faded.

Being the wife of a Canadian prime minister offers both rewards and challenges. In Prime Ministers’ Wives, author Lavona Fercho presents a look at the wives and their lives as public figures.

Beginning with Isabella Clark Macdonald and ending with Sophie Gregoire Trudeau, this collection of thirteen biographical sketches reveals how the role of the wife of Canadian prime ministers has developed throughout the years. Fercho depicts how each wife coped with the battles and intrusions they faced at the prime minister’s residence at 24 Sussex Drive. She shares how some wives adopted a minimal public lifestyle, while the more gregarious accepted roles, of charitable chair positions, press conferences, as well as campaigns to promote their husband.

Frank and revealing, Prime Ministers’ Wives tells how each wife handled the extreme pressures of the position. Whether personal or public, reported experiences were of marital challenges including infidelity, parentage, alcoholism and mental illness as well as public verbal and physical assault, death threats, and unrelenting scrutiny while promoting a societal recognition of women for equal status.

Lavona Fercho earned a bachelor’s degree and a master’s degree in education and enjoyed a career as an educator, administrator, and researcher. Her research began by exploring outranked women of the Klondike in the Queen Victoria era and continued with wives of Canadian prime ministers in the same era, who were classified as not “qualified persons”. Advances they made championing identities, developing roles and defining the status of all women through the next century are depicted and celebrated.