Stealing First and Other Stories 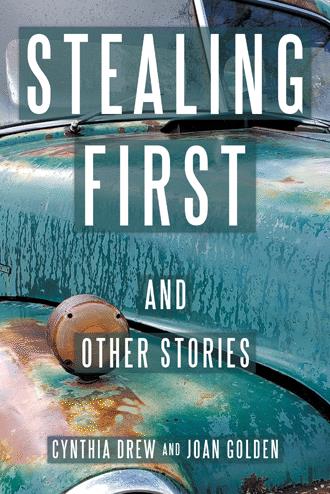 After supper Babette bathed her daughter with cold water and took her temperature. Even in the cooler evening air the little girl’s fever registered 102 degrees. While Babette moved between the screened porch and the kitchen tending to Isabella, LeBlanc sat on the front steps, a pint of whiskey in one hand, a cigarette in the other.
Ronnie leaned in the doorway. “How’d you do today?
“Couldn’t catch spit if I stood downwind. Water was too muddy, fish couldn’t find any grass. Where’d you get off to?”
“Went to the American Legion post to see if any of them could coach us.”
LeBlanc sniffed and shook his head. “And?”
“They couldn’t, but they sent me to see Scoot Groshon.”
“Ah.” LeBlanc drank from the whiskey bottle. “You go out there?”
Ronnie nodded. “Yeah.”
“That do you any good?”
“Uh huh. Ended up doing a lot of good. He agreed to coach and gave us a bunch of equipment he had left over from his days in the Negro League. Then he spent some time working with me on my pitching.”
“You pitch fine, son.”
“I thought so too, until he showed me better. Taught me how to throw a knuckleball, too. Hey, Dad? He said he knew you from the war.”
LeBlanc pinched his cigarette in a thumb and forefinger and flipped it into the dark. “Yeah, we got ourselves in a jam together once.”
Ronnie sat down next to his father. He waited for more. “What’d Scoot Groshon do in the war?”
“Ninety Second Buffalo Soldier. They ran litters to ambulances from the battlefield.”
“The two of you got in a jam fighting Germans?”
“Uh huh. It was pretty much just the two of us fighting Germans that day.”
June bugs hurled themselves at the front porch light, frogs grumbled in the swamp.
“Where?”
“Middle of a river just east of Anzio. In Italy.”
“Wow, Italy.” Ronnie looked at his father, trying to imagine him anywhere but in Nina.
“Don’t go thinking ‘wow.’ It was anything but wow. Worst goddamn mess I ever got myself into. Scoot probably thinks so too, I don’t know. After we left there, we never talked about it.” He paused for a drink. “That was the day Johnny Bellew died. You said Pink told you about all that.”
“Naw, when did I say that?”
“Yesterday, in the truck. I was going to tell you some about how Johnny died – I thought you needed to know because of you knowing Pink. Then you said Pink already told you.”
“Oh. I thought you were going to tell me about…well, you know…women.”
LeBlanc chuckled. “Christ almighty, son. If you don’t know about sex by now we got more to worry about in this family than I thought.” He clapped Ronnie on the back. “You don’t know about all that, I’ll take you to Dotty’s with me next time I go.”
“Well, I do know, so—uh, so you don’t have to worry about having that talk. Tell you what though, I’m kind of worried about Izzy, aren’t you?”
“Yes, I am. I’m worried about Izzy and what in hell your mother’s got herself into with trying to distribute cigarettes. Never mind she’s spent all her money on this damn venture. Good Lord, in one day the female half of the family fell apart while I was off trying to catch a fish.” He looked at Ronnie. “You sure I don’t have to worry about you, too? You seeing anybody? I reckon not, if you’re sitting here on a Saturday night.”
Ronnie shrugged. “I thought Cherie Landry liked me until she decided she wanted to get married. But when I told her I didn’t think it was such a good idea she got mad. Maybe I’ll see about taking Gabrielle Doucet out now and then. She’s OK She likes me.”
“Listen, you’re just as well off without a girl like Cherie. Do yourself a favor. Don’t get attached to no gal so quick as I did with your mother. Time I was your age I was half way to being a father, you know.”
Ronnie rubbed his forehead, trying to imagine how impending fatherhood must feel at eighteen. He couldn’t fathom it. “So…what about Pink’s dad? What were you going to tell me?”
LeBlanc sighed. He lit another cigarette and rerolled the pack into his T-shirt sleeve before he spoke. “January in Italy ain’t any warmer than it is here in Louisiana. There was this river, the Liri, running west to east. Gets wider as it flows east.”
He drew a squiggly horizontal line in the dirt at his feet.
“The Army was trying to take the river as we moved north, to push the Germans out of Italy. Going west, upriver, on patrol, John Bellew was on point, thirty-five yards ahead. I was the next one back. We heard gunfire—machine pistols and submachine guns. I came around a bend in the stream and saw John kill the little shit firing the machine pistol. Then a German submachine gunner killed Johnny. That’s really all I was going to say yesterday. Just a mention, so you’d know—you know, so’s not to make any remarks would remind the Bellews of anything because you didn’t know different.”
“Oh. Yeah, well, thanks. I appreciate knowing.” Ronnie frowned. “What happened after Mr. Bellew got shot?”
LeBlanc picked tobacco from his tongue. “I went forward alone, to reconnoiter.”
“How many did you have behind you?”
“Immediately behind me? Three.”
“Could you get to Pink’s dad?”
“Yeah, but it took some doing.”
Ronnie heard his mother talking inside the house. He turned, seeing her carry Isabella to the bathroom. He swallowed hard and looked at his father. “What’d you do?”

In the American deep south in 1957, the Redbirds battle the Bayou Braves for the championship. Ronnie LeBlanc, the Redbirds’ pitcher, believes that winning the regional title is his ticket out of a dead-end job at the local sugar mill. When the Redbirds suffer a series of losses, the team’s coach quits, and the sole person willing to take the job is a former Negro League pitcher—the only African-American in a still-segregated game.

Ronnie begins to suspect external forces are the cause of his team’s unlucky streak. As he digs for answers, he stumbles upon a secret: Bo Brasseux, the town’s bigoted banker, is scheming to kill the Redbirds’ new coach, throw the championship game, and ruin Ronnie’s family financially. A scout for the Chicago Cubs could be the answer, but will being tapped by the Cubs be enough to thwart Brasseux’s despicable plans against the coach and Ronnie’s family?

Based on a true story, “Stealing First” is only one tale in this collection that offers glimpses of small-town politics, snake-handlers, nosey house-hunters, and the making of a murderer. Each story looks at our prejudices and conceits, our loves in all their variations, and the worst and best of us.

Cynthia Drew has garnered several awards for her novels, among them the 2018 INDIE Gold for Best Mystery, a 2012 INDIE for Best Historical Fiction, and the 2013 Mom’s Choice Award for Best Inspirational and Motivational Literature for Children. She is a practicing private investigator.

Joan Golden is an award-winning playwright and screenwriter.