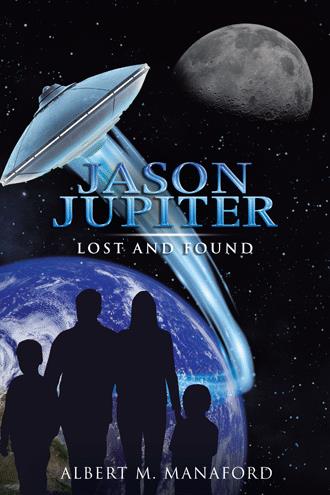 As he walked out from under the trees into a clearing, he spotted the object! It had to be over two hundred feet long and about forty feet in diameter. It was hovering above the ground, lit up like a multicolored fluorescent light bulb. The closer he got, the brighter it grew. He stopped in his tracks as the object moved, touching down on the ground. It had landed! He continued toward the object through a haze of gray smoke, now a little cautious. He could not believe his eyes. It was a spaceship! He walked up to the tubular, cigar-shaped spaceship. Its outer hull appeared damaged, having taken on the shape of an accordion. The mysterious spaceship caused him immense curiosity. He surveyed its outer hull but found not a soul or any occupants whatsoever—only the trees of the surrounding forest and the moon shining down like a large spotlight. Jason decided to investigate the strange spaceship, as if driven by some unseen force. He hesitated at first but finally walked up to the side of the spaceship. To his surprise, an open doorway appeared in front of him, seemingly from out of nowhere. Feeling a little braver, he entered the spaceship and looked around but again found no crew members. He now wondered if it had been abandoned, as no one appeared to have been in command. Maybe it was remote controlled, Jason thought. He continued down a rectangular corridor nearly fifteen feet tall, though the size of the corridor was like an optical illusion, changing shape, becoming larger and then smaller about every four feet, matching the accordion shape of the spaceship. Even the floor seemed to be getting longer and then shorter, as though Jason were walking up and down on a hill, yet he was not struggling or using any more effort than if he were walking on a flat surface—very strange. Continuing farther into the ship, he entered a large cargo hold, which seemed much larger than what he’d viewed from the outside of the spaceship. It was easily over a hundred feet high—another optical illusion? To his eyes, the floor, walls, and even the ceiling had more depth to them but still matched the accordion shape of the spaceship’s outer hull. When Jason turned his head to his left, something amazing caught his eye: a partially visible circular glass container, similar to a soap bubble. The transparent object was disappearing and reappearing. Then it started to flicker like a clear light bulb and finally turned into a solid object. A small spaceship that had been previously cloaked was now visible. It was a circular craft, at least twenty-five feet in diameter and flat on its bottom with a silver hull shaped like a half-domed football. There were numerous round and oval windows along its sides. At the very top was a strange-looking, silver-tinted window nearly six feet in diameter and perfectly matching the curvature of the outer hull. Its tint had an unusual depth, similar to a two-way mirror, yet was still reflective. Jason immediately became excited, as he had always wanted to travel into outer space, visit the moon and Mars, and even journey beyond Earth’s solar system. He walked within a few feet of the spaceship but did not see the outline of a door anywhere. Without warning, dozens of small circular lights appeared on the hull in front of him, glowing red and then blue in surreal intensity. They looked like reflections—mirages—and started to blink on and off in unusual sequences. This surprised Jason, as he had not touched anything. The lights seemed to have activated when he had gotten in close proximity. Gingerly, he reached out and touched one of the blue lights, and an open doorway, about seven feet in height, appeared just to his left. For a few moments, he could hear only the excited wisps of his breathing as he thought about what might be inside the small craft. Finally, making his ultimate decision, he walked up a small ramp, continued inside, and then stopped. The interior was very bright, but he could not see any lighting fixtures anywhere. The space also appeared twice as big as viewed from the outside, as though he were inside a holographic deck like in the Star Trek science fiction movies. There were three seats at the front of the spaceship, with curved windows in front of each seat, matching the curvature of the ship’s outer hull. There was a square instrument panel in front of each seat, as well as instrument panels to each side of the outer seats. All the instrument panels were blank. In front of the two outer seats were what appeared to be control wheels, or yokes, similar to what would be found on jet-powered or propeller-driven aircraft, but they looked remarkably different. Jason calmly sat down in the left chair, which was extremely comfortable, as if sitting on air. With all the instrument panels apparently turned off, he wondered how he was ever going to get the small craft out of the cargo bay. He studied the interior of the spaceship, which he now thought of as his spaceship, because he’d found it first and it had been abandoned on his mom and dad’s 640 acres. When he stared back down at the instrument panels, there were still no etchings of life whatsoever. I wonder how I can get this ship to fly, he thought. This might be my chance to see the stars.

One night as ten-year-old Jason Jupiter stares into the heavens from his porch swing and dreams of space travel, an object falls out of the sky and vanishes along the horizon, seemingly in close proximity to his house. Overwhelmed with curiosity, Jason decides to investigate without telling his parents. Following the light from the moon, Jason walks through a forest and into a clearing where, to his surprise, he fi nds a damaged spaceship without occupants. After he enters the ship to explore, Jason eventually encounters a small craft inside the cargo bay with a humanoid boy inside. When Jason inquires how to start the tiny spaceship, Michael happily shows him—a decision that quickly sends the boys on a dangerous joyride. After they barely escape the fi ghter jets in pursuit, the boys zoom in the craft to Jason’s house in Los Alamos where they cloak the ship and become friends. Now Jason must determine how to keep Michael and the spaceship a secret from his parents and an undercover government agency with a lofty goal. Jason is about to discover that his adventure has only just begun. Jason Jupiter is the tale of a ten-year-old’s exciting experiences after he stumbles onto a spaceship with a humanoid boy inside.

Albert M. Manaford has always had a interest in sciences, theologies, and philosophies. He earned an engineering degree. He is passionate about encouraging younger generations to become interested in science and also helping bridge the gaps between science and theology.