The Plum Blossom of Luojia Mountain 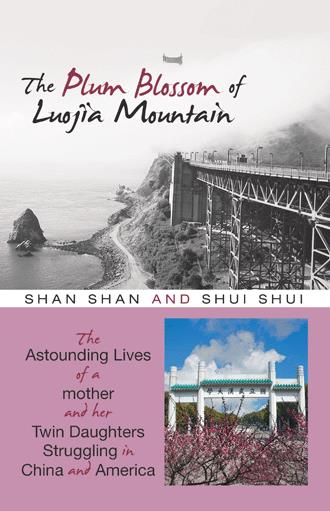 The book is about a mother, Mei, and twin daughters in China and then later in the United States. A legendary story of twin sisters upraised from bottom of rural China through the turmoil of Cultural Revolution, (Withought any English background) and US-China conflicting relationship to become senior management of major high tech corporations in urban USA. A must see for those who are eager to be successful but inherit nothing except wisdom and determination.  This story describes the hardships three women will endure to survive in a hostile environment. Also, the story about mother and two daughters   romantic love story  . Such as after 35 years separation, the mother remarries with father again etc. Also, reader can see that the relationship between United States and China deeply affected people’s life.

Mei Chen is the apple of her parents’ eyes. As she grows up in 1930s Dong City, China, she is loved, cherished, and spoiled by her parents who value education above everything else and hope their daughter will one day attend a prestigious university. Mei’s childhood is idyllic—until Japan invades China and sets both her and her family down an unexpected path full of obstacles.
As Mei matures into a beautiful thirteen-year-old, she becomes engaged to a thirty-year-old college professor with the hope that she can save her family from more heartache. After she and Linkan Wang eventually marry, Mei gives birth to twin girls, Xiaoluo and Xiaojia, in 1947 and does her best to raise them through turbulent, dangerous times. As destiny leads the twins to eventually immigrate to San Francisco without knowing the language, Shan Shan and Shui Shui must somehow survive the cultural revolution and a conflicting relationship between their native country and the United States to achieve their dreams.
In this poignant tale of love and loss, a mother and her twin daughters must rely on their inner-strength and courage to persevere through hardships within both China and the United States.

Shan Shan and Shui Shui are the pen names of the two authors.
Shan Shan
Shan Shan is one of the co-authors of this book. She was born in China, in 1947. After graduating from high school in 1965 she voluntarily joined the “educated youth” program and went to the countryside and worked as a farmer for seven years. She earned a Physical Chemistry teacher’s degree in 1972. She left China and came to the United States in 1979 to join her father after thirty-two years of separation. She earned an Electrical Engineering degree in 1988. She worked in a few of the Top 50 high tech companies in the United States and had her own company for nine years.
A collaboration with her and her twin sister resulted in a dramatized novel in 2010 entitled “From Luojiasha to Jiujinsha”, means “From Wuhan to San Francisco.” The novel is in Chinese and was published in China.
Shui Shui
Shui Shui is the other co-author of this book. She is the younger twin sister of Shan Shan. After graduating from the top one high school in Wuhan, China, in 1965, she joined the “educated youth” volunteers and worked as a farmer at a rural plantation for eight years. She returned to Wuhan in 1973 and attended the Central China Normal University. After earning her Bachelor degree in Mathematics, she became a mathematics instructor at her Alma mater. In 1979, she came to the United States to pursue her Master’s Degree in Electrical Engineering. For over thirty years, she advanced her career in high-tech industries.