Meido, the Bird Who Was Afraid to Fly 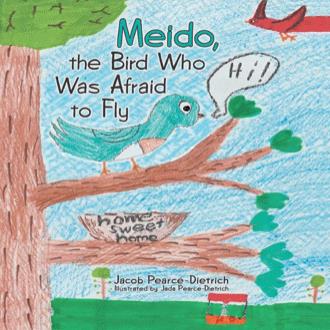 Flier dashed under benches, between pedestrian’s legs, over tables, around the swings, down the slide, back up the slide, over the monkey bars, but he couldn’t shake the Tuesday Terror. Just then he saw Meido by the balloon stand waving him in that direction. Flier knew what to do. He ran towards the stand with Jaws close behind. Using every ounce of strength, he fluttered his wings to get on top of the stand. He looked back as Jaws began to leap. Meido yelled, “Now!” Flier dove through the balloons with Jaws on his tail feathers. Meido clipped the balloon strings at the perfect moment and caught Jaws with a net of strings. Jaws slowly began to lift into the air. He struggled with all his might but could not get free. The two birds rejoiced that their plan worked, and they were safe!

As they watched Jaws float away, there joy slowly faded with every foot that Jaws got higher and higher in the sky.

“He’s going really high up there Meido.” Said Flier.
“Yeah, and he’s not slowing down.” Meido stated with worry on his face.
“Do you suppose he’ll get as high as the clouds?” asked Flier.
“Its looking like it.” Said Meido.
“What if a plane hits him?” asked Flier.
Reluctantly Meido says, “We have to save him.”

Meido is a bluebird who lives in a park downtown, up high in an awesome tree. But something makes him different from many other birds: he’s afraid to fly! Instead, Meido climbs up using his talons.

One beautiful morning, Meido and his best feathered friend, Flier, are going around the park and taking care of official bird business. They go to the mulberry bush for breakfast and pay a visit to an unlucky person’s white car. Then the Tuesday Terror, Jaws the Chihuahua, arrives, and he’s out to get revenge on Meido and Flier for a trick they played on him before. But when their escape puts Flier and Jaws in danger, Meido knows he is the only one who can save the day. He’ll have to overcome his fear and finally start flying.

In this children’s tale, a mischievous bird gets his friends in trouble and must conquer his fear of flying in order to rescue them

Jacob Pearce-Dietrich and Jada Pearce-Dietrich are a father-daughter duo who teamed up to create a fun, thoughtful tale. Bedtime stories are an important part of their lives, and this, their first book together, emerged from that tradition. They currently live in Greenfield, Ohio.