The Generation and Governing of Nested Arrays and Three-Dimensional Arrays 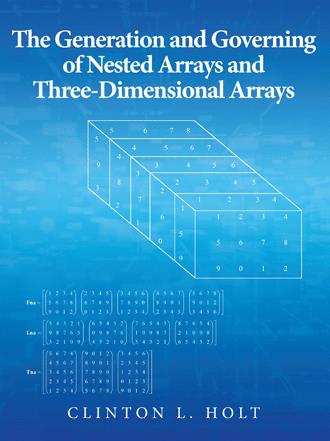 Why should you buy this book? I have discovered something no more advanced than 3rd Grade arithmetic that no one seems to be able to understand.

1. This is a new discovery in Mathematics, or Arithmetic, not seen before.
2. You might find a new engineering application that will make you rich. 3-D TV or 3-D mapping, for instance. Naaa, what else?
3. You might help me write a program for a one world credit system; a one world bank; a one world inventory. Keep track of everything! All in the same program! We can do it all at the same time! Naaa, what else?
4. You might help me invent a 3-D computer memory that could operate at virtually infinite speeds. Billions of years per second. Imagine, every computer manufacturer will come to you for the rights! Naaa, what else
5. There is no money in this one, so perhaps I shouldn’t mention it. You might make a new discovery in Mathematics and the Equation will be named after you. Your name will live forever in the History of Science. You will never be forgotten. And best yet, students for ages to come will curse your name as they study what you have found. Your name will be remembered forever! Scientific immortality!

I believe they are suppressing this math, I want you to have the information and decide for yourselves whether it is important or not.

This is what I discovered. When we derive a Nested Array, we can not only sum the columns (this is Regular Matrix Multiplication that we already know), we can also sum the Rows of the sub-Matrices and sum the sub-Matrices themselves. (A sub- Matrix is a matrix that is an element in the NA.) If we sum each individual Row Sum, Column Sum and sub-Matric Sum, square them and sum, divide by a constant we have 2-Variable Analysis of Variance automatically. The NA is also a natural Inventory/Accounting system. Three separate systems are combined together in a cohesive whole that allows us to write NA Equations in single Matric expressions.

It is also it’s own computer programming language.

How fast can a 3-D Computer theoretically compute?

NOTE: This is Science Fiction as evidence points to an Expanding Universe, rather than a Black Hole Universe. With the Collapsing Universe theory the Big Bang occurs over and over and life goes on through eternity. This example favors the ‘out of date’ theory that we are living inside an inside-out black hole, but still living inside a black hole.

We wish to half-Multiply a 1 x 109 column Matrix across a billion x billion matrix in Gaussian Fashion. With the math we know this means we have to diagonalize the 109 column Matrix to a 109 x 109 matrix. We start the multiplication of a billion x billion Matrix by another billion x billion Matrix. The computer has a speed of 1 Ghz. To multiply and sum a one billion row by a one billion element column takes one second. To multiply the one row into 1 billion columns takes 1 billion seconds (approximately 32 years.) Actually this is double as we need to add and sum for each operation. That 64 years. Now we multiply the columns by the other 999,999,999 rows. This takes 64 billion years to solve this multiplication.

The years are selected to fit this example. (I’m not sure how long the Universe will actually last.) This is just to show you the advantages of half-Multiplication and 3-D memory.
The Universe is 14.5 billion years old. Suppose it goes on another 15 billion years before the momentum of all the stars and galaxies stops its motion and it begins to collapse. It takes another 30 billion years to collapse back into a black hole. That’s 45 billion years from now. We are still waiting for our solution.
Let’s assume every star shines with 4 million tons of matter every second (emission of our sun). The light emanated by trillions of stars over billions of years formed a halo of light inside the event horizon of the universe, are also pulled back as the universe collapses; this light is so concentrated that its almost like solid matter. By the time this light reaches the Universal black hole and encompass it with light so concentrated by gravity and velocity it is like a solid wall of matter moving at the speed of light. It compresses the singularity of the black hole until there is no where for the black hole’s collapsed matter to escape. It implodes inside out into another Big Bang, Life is not ended but starts over, and we are still waiting to solve our problem. Four billion years later our sun forms again, and we finally get our solution.

But our Boss needs a solution by 9 AM tomorrow morning when the Banks open.

But, half-Multiplying a 1 x 109 Column across the 199 x 109 a billion operations at once at one Gigahertz would take all of one + 1 seconds to solve.

I have no money, I cannot pay anyone. You will have to explore this on your own, for free.

Everyone will start at the same point; there is no book or person to go to for help except this book and me. If you need help to get a head start on the rest, just contact me and we will be partners, otherwise this is free to you and you can keep and patent all discoveries, but you may be competing with MIT, Cal Tech and others. Are you ready to compete with them?

Mathematicians, Programmers and Engineers: I believe this discovery has been suppressed since I first reported it to the American Mathematical Society over 20 years ago. You may not be able to get your discoveries published in Journals. So, send them to me, when we get enough new ideas, we will publish them ourselves.

Clint has discovered something no more advanced than third grade arithmetic.
This new discovery could lead to new engineering applications; or lead to the creation of a one-world bank, one-world credit system, or one-world inventory. Could you imagine being able to keep track of everything in one program?
What the author has found could even lead to the creation of a three-dimensional computer memory that could operate at virtually infinite speeds – or it could lead to the discovery of even more mathematical findings.
The discovery, which he outlines in detail in this book, shows that when we derive a nested array, we can not only sum the columns (which is regular matrix multiplication that we already know), we can also sum the rows of the sub-matrices and sum the sub-matrices themselves. That is just the beginning.
In this book, he reveals what he’s found – something that he first reported to the American Mathematical Society more than twenty years ago but was ignored, not understood or suppressed. With this book he hopes you make up your own minds.
He offers 9 valid m+1, n+1 Proofs. Statistical examples are entire chapters reduced to single lines of programming. Accounting, Inventories and Statistics are ruled by a single set of three basic equations. n(A x B) = C; n( A ⊗ B ) = C and n( AT o B ) =C. We look at them in 0-D and all three reduce to A x B = C. You know the first two equations, the third generates 3-D Arrays. The third is the new Operator we will explore in this book.

Clinton L. Holt has worked on his discovery of a Gaussian operator that mimics the multiplication used in Gaussian Reduction and creates three-dimensional numbers since retiring. He explores how three-dimensional numbers apply to our daily lives in this book. He loves puns, keeps a small garden, and enjoys making his own homemade wine. He lives in Wichita, Kansas, with his two dogs.