A Story of Kentuckians in the Texas Revolution against México 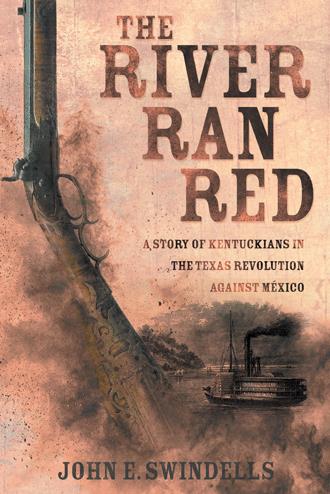 Burr DuVal speaks from the stoop of the DuVal house in Bardstown, Kentucky
November 1835

By six, about 30 young men had assembled in front of the house and the parlor was clearly too small for such a group so Burr took position on the steps where he could address the group. Hot cider was handed round which put everyone in a quiet mood, receptive to Burr’s talk.
He began by reciting a bit of history that explained how Texas had come to be populated by US citizens.
“The Spanish had little success in settling Texas. No one wanted to go so far from where most of the Mexican people lived. Eventually, just after México’s independence in 1821, Stephen Austin took up the license his father had been granted to bring families from the US to settle in Texas. Land grants were generous and the colony has grown. The land Austin was granted is excellent agricultural land and cotton and sugar industries have grown rapidly. Other men obtained license from the Mexican government and founded colonies near Austin’s, but none has been as successful. The difficulties the Texians now face is that the central government has been taken over by a dictator named Santa Anna. He dissolved the state governments and appointed military governors. He fears that the US will take over Texas and is now assembling an army to forcibly drive out all the Americans. Slavery is also an issue in relations between the colonists and the government. The Mexican constitution has outlawed slavery and Texian industry is dependent on them. So far, the government has not tried to enforce emancipation, but it is believed Santa Anna will do this.
A voice from within the group called out: “They can’t take away property like that!” “It is their country,” answered Burr. “They can do just that if their laws require it.” A low mutter passed between the men.
Another voice from within the group spoke up: “What would be in it for us? Can the Texians pay us”.
Burr squared his shoulders as he replied, “The primary payment will be in land. As of now a new immigrant is granted one league and one labor of land. In our terms, this equates to 4605 ½ acres.
A sharp intake of breath was heard as the numbers sank in. This was many times more land than any one of them could imagine owning in Kentucky. A murmur of conversation passed through the group.
“But, beyond that,” continued Burr, “the values of liberty and community that we hold dear are the same for our cousins now in Texas and are threatened by Santa Anna. If you share these values, come with me and strike for freedom. A good gun and 100 rounds of ammunition are all that is needed. Of course, we must live, so stout shoes and warm clothing is also needed. Our route to Texas will be first to Louisville where we will take ship down the Ohio and Mississippi to New Orleans where we must board a sailing ship to cross the Gulf of México to the coast of Texas. We will there join the Texian army and march against the Mexicans.”
Conversation grew more general and louder as the young men pondered what had been said.
The lure of so much land was powerful and the adventure of a war perhaps even more so.
After a few minutes had passed, Burr could sense the time had come for decision: “Now, who is with me”? he shouted. “Raise your hands for the adventure of a lifetime.”
Little by little the number of raised hands grew until at least 20 signified their willingness to follow Burr.
“Right,” he said. “We will leave tomorrow morning. Equip yourselves with good footwear, good gunpowder and lead, bring your weapon and meet in front of the courthouse there just before dawn and we’ll march off together.”
The men were surprised and a bit shocked at the quick departure but the group broke up as the volunteers returned to their homes to announce their plans and collect their equipment

It is the summer of 1835 when William Pope DuVal returns to Bardstown, Kentucky, after serving twelve years as governor of the Florida territory. His offspring are spread throughout the state and country, each pursuing their passions. But when México sends a general and hundreds of troops to Béxar to arrest Texian leaders, DuVal and others in his family are left to contemplate whether the American colonists can stand up to the threat.

A desire to help soon leads two of William DuVal’s sons to join a group of young men, known as the Kentucky Mustangs. They leave Bardstown a short time later to join the American colonists in Texas in their resistance against the Mexican dictator, Santa Anna. The adventurous men, enticed by the excitement of war and free land, travel from Louisville to the Texas coast where they join the forces of James Fannin. As the intense fighting begins, all the volunteers pay a high price for securing the independence of Texas a year later and its annexation into the United States in 1845.

In this historical novel, a group of young, adventurous men known as the Mustangs leave Kentucky for Texas in 1835 to join colonists in their revolution against México.

John E. Swindells retired at the rank of colonel after a thirty-year active duty career in the US Army. He served two tours in Vietnam and several in Germany, as well as in the Defense Intelligence Agency. John lives with his wife, Jean, and a houseful of dogs and wild animals in a two-hundred-year-old farmhouse in Bardstown, Kentucky.  He has a bachlor of arts in zoology from the University of Texas, a masters in anthropology from the American University and a masters in science education from George Washington University.