Book One of the Movin’ Quadrilogy 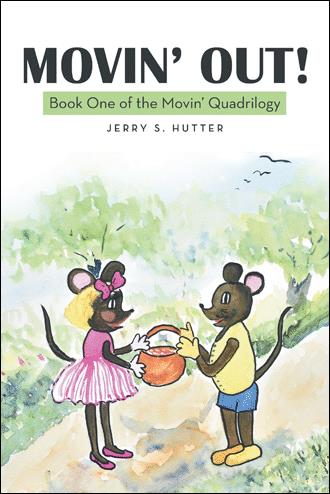 Chapter 1-Business Before Pleasure.
“Here ye, here ye, call to order!!!! I call to order this meeting of Mice International! Quiet , please, quiet please!” Herman, the President of Mice International, local chapter 256, hit the podium with the gavel a few more times. The audience, which numbered about fifty-seven mice, was buzzing. They were gabbing, laughing, throwing paper airplanes made of cheese packages, and tittering at jokes.
“QUI------ET!” Herman screamed. You could now hear a pin drop. The crowd hushed and looked up at Herman, awaiting the gems of wisdom that would fall from his lips. The monthly meeting had now begun.
“Okay, the first order of business is to review the business we reviewed at the last meeting. Secretary Fifer, could you please read us those notes ?”
Poor Fifer! He had an awful time keeping his notes together. He actually loved being the secretary-it made him feel important to have such an awesome responsibility as this! But there were so many notes, and so little time to organize them! Fifer, with his signature little blue cap on, came running to the podium, stumbled on the bottom step, and tripped up the stairs to the stage. Falling on the steps, his papers flew up everywhere! There must have been one thousand papers, scribbled messages on scraps of paper, and post-it notes of every color, all over the stage, the steps, in front of the stage….everywhere! The mess resembled the streets of New York after Macy’s Thanksgiving Day parade, or a ticker tape parade for a popular sports figure.
“Oh , NO!” Poor Fifer began picking up the papers. As he picked some up, a few more fell out of his hands. The mice in the front row began helping. Soon there were about twenty mice running, scrambling, bumping into each other, dropping more notes, picking more papers up; then they all ran to Fifer and shoved papers in his arms. Poor Fifer ran up the steps again, bumped into the podium as his hat fell down over his eyes, and dropped all the papers again! Mice started laughing, guffawing, cracking up, slapping each other on the back, and giggling.
“Harrumph!” Herman cleared his throat, looked through several dozen sheets of paper on the floor, handed them to Fifer, and said, “Now, read these! Let’s get this meeting going!”
Fifer pushed his hat back on his head. He got out his coke-bottle lens glasses, and began to read.
“Crackers, Milk, bread, eggs, cheese, more cheese, fish, toilet paper .…” his voice trailed off softly.
“Not your grocery list, Fifer!!! The business meeting notes! The business meeting notes!!” Herman was getting frustrated and beginning to turn a little red around his ears and on his cheeks.
“Oh, yes, yes, um….here they are….I think. Greetings, fellow Americans! It has come to our attention that you would do very well with this new credit card, Mouse Adventures Card. Just think of the fun you could have, and charge it, too! Take a ride on a train, or a leaf boat, see exotic places, do exotic dances, eat exotic cheeses…” Fifer’s voice got thinner and trailed off.
Herman yelled at the top of his lungs, “Fifer, the BUSINESS MEETING NOTES!!!” He was bright red now. “Oh yeah.” Fifer said timidly, He bent over , shuffled through some more papers, and a handful of papers spewed up in the air and out of his hands all over the front of the stage.
Everyone began tittering. Herman glared at them and banged the gavel hard. Everyone was quiet again.
Ezra, who was known for his helpfulness, quickly ran up the stage steps and helped Fifer sift through the thousands of notes. He found a big yellow sheet with the heading “Business meeting Notes”.
“Here ya go, Fifer. This is it. “ Ezra whispered, and then quickly returned to his seat.
Fifer approached the podium more confidently now.
“Thanks, Ezra!” he smiled as his hat fell down over his eyes. He quickly pushed it back up , cleared his throat, and began reading.
“Business meeting notes of 10/11. Attendance; Everyone was here. Business brought to attention and discussion-
Number one. Should we build a fence behind the Old elementary school to keep out the rats? Yea or nay. Yea, 51, nay 6.
Number two. Should all mice participate in building the fence? Yea, 2, Nay 55.
Number three. Should only the Office Holders of Mice International build the fence? Yea, 50, Nay 7.
Other business was as follows-
Mrs. McAlister has been attempting to annihilate mice in her yard with poison pellets. All Mice please be advised of this danger, and avoid Ms. McAlister’s yard. Do not cut through her yard to get to M & H ‘s (Mice & Hamster) grocery store-too dangerous! She has also set some traps, and has been known to try to kill mice and rats by pounding them with her broom. She has also been shooting them with a pea shooter. Doesn’t kill, but YOWCH!!! All mice are to avoid this area immediately! A sign will be installed at all sides of Mrs. McAlister’s yard by volunteer Barney Ruble.”
Herman interrupted Fifer’s reading.
“Hey, Barney, you out there?” Herman put his paw over his eyes to try to block the stage light’s glare. A voice was then heard as all the mice looked around.
“Yeah, here I am, Herman. It’s me, Barney”.
Barney stood up. He always wore his deputy sheriff shirt, and always looked unkempt. His deputy badge was dangling halfway off his shirt, his hat was crooked, and his dark mouse hair stuck out in tufts from under his sheriff’s hat.
“Yeah, well, I had to hand paint the signs myself. No one offered to help me. Not one mouse! Those signs are heavy corrugated cardboard. No one offered to help me lug them over to Mrs. McAlister’s yard. Are you aware how far that is?” Barney’s voice got louder and louder as he talked.

Molly and Terrance are two civilized mice trying to quietly live in Mouseland while abiding by the laws created by Mice International. One morning while on food procurement duty in a suburban kitchen, Molly and Terrance barely escape with their lives before being detected by the Jones family—but not before they overhear Mrs. Jones threatening to fumigate the house!
Thankfully not everyone in the Jones house hates mice. The children, Samantha and Cianan, love the little creatures and will do anything to protect them. Meanwhile, all the mice of Mouseland have other challenges that include a trio of rat bullies—Shake, Rattelle, and Roll—and a neighbor lady who also hates mice. When Mrs. Jones decides to have her home fumigated, she plans a family camping trip. After her children forewarn the mice, the tiny creatures decide they should go camping too. But there’s only one problem: the rat trio is up to no good. Now it is up to a homeless dog to save them all, before it is too late.
In this delightful tale, a homeless dog and a group of mice teach a suburban family and other animals how to be kind and live in harmony.

Jerry Hutter loves children, animals, & old people, a group in which she finds herself belonging now.. She enjoys imagining stories about animals & has an extensive stuffed animal collection. She is an RN, still working into her 43rd year. She enjoys swimming laps (40most days) , beaches, & hiking in the woods with her dogs and family. Other hobbies are attending live plays, photography of family, friends & pets, & swing & freestyle dancing to live bands. She is an almost lifelong resident of St.Louis, & counts herself as one of the staunchest Cardinals fans! Jerry belongs to the Mo. Pageant Alumni Club, which sponsors the yearly Ms. Senior Missouri pageant. This group of 60-year-old-plus talented ladies entertain at nursing homes and other venues, and donate their funds to charities. She has 3 grown children, 5 grandchildren, & 1 great-grandaughter, who bring her a lot of joy!