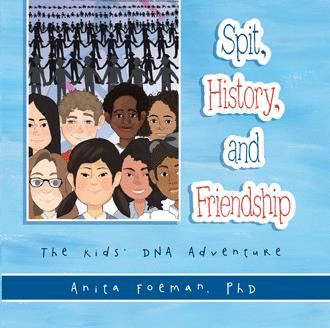 “A big, fat wad of spit!” exclaimed Mikhi at school the following day. “That’s how they get the DNA sample.”

Mikhi explained that the labs that took and tested the saliva were able to look at DNA and compare small differences from different people around the world. The people might be from places in Asia, or Africa, Europe, the Americas or the Middle East. Since DNA is in every part of our bodies, spit works just fine

Who we are is a combination of many things. It is how we look, who we love, what we eat, what we think is important, where we grow up, and the genes that make up our bodies. Our genes are like a history book.

Spit, History, and Friendship: The Kids’ DNA Adventure follows a group of middle schoolers—eight in all—as they learn about what DNA can tell them about their ancestry. The kids are from different backgrounds, and they are surprised by the results. Each has a rich and fascinating story; they share their excitement and what they learn with each other and their classmates. The kids discover they are more connected than they realized.

A work of fiction, the characters in Spit, History, and Friendship were inspired by the real stories of people who participated in the West Chester University DNA Discussion project, the basis for this book.

Anita Foeman, PhD, has been excited about ancestry DNA since she first heard of the Human Genome Project. Since 2006, she has been ancestry testing students in her university classes, friends, and people in the community, and she speaks to young audiences about DNA testing.