The Rogue Waves of Financial Markets 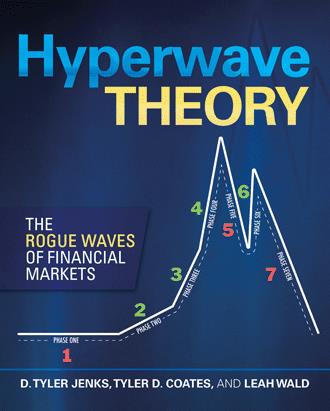 “All through time, people have basically acted and reacted the same way in the market as a result of: greed, fear, ignorance, and hope. That is why the numerical formations and patterns recur on a constant basis.” - Jesse Livermore

Anyone familiar with financial markets is likely very familiar with the different types of chart patterns that are prevalent. Head and shoulders, double tops, triangles, wedges, et cetera. Even if one does not understand or believe in the implications of these patterns he or she is likely aware that they recur constantly.

It is easy to conclude that a chart pattern is nothing more than a coincidence or a self-fulfilling prophecy, however, we prefer a far more nuanced view and remain intrigued by the idea that patterns are a manifestation of collective emotions.

When bears growl and bulls charge, the spirits of these animals permeate into society and affect the way that we think and act; and this is when we can make irrational decisions. Because, finance is not exempt from wild emotional extremes. Contrariwise, it is a reflection of the collective consciousness of all participants.

Irrational exuberance can easily be seen by examining the classic historical bubble case examples of the Tulip Mania, the South Sea Bubble, The Great Depression, The Dot Com Bubble, The Mortgage Crisis.

History doesn't repeat itself, emotions do.
The feelings of greed, fear, ignorance, and hope, feel the same regardless of skin color, nationality, gender, age, or calendar year. When participating in the markets with an expectation of making profit, we feel the same emotions as our ancestors. The patterns we see in today’s financial markets are a representation of these collective emotions and therefore they should remain essentially unchanged throughout space and time.
Head and shoulders patterns occurred in the early 1900s just as they occur now. Furthermore, they are just as prevalent in Japan, China, Germany, and Europe as they are in the United States.
Hyperwave can be characterized as a chart pattern but it is also much more than that. Hyperwave is a social phenomenon and it is an expression of a macroeconomic shift.
Macroeconomic shifts are extremely rare and therefore so are hyperwaves. We are currently experiencing more Hyperwaves than at any other point in recorded history, therefore we are likely undergoing the largest macroeconomic shift that has ever occurred.

Hyperwaves are like snowflakes in the way that they are created. Snowflakes form in a seemingly haphazard way. Two points form over here and one over there. There is no such thing as identical snowflakes however they all form into nearly identical structures. This is exactly how Hyperwaves take shape.

It is important to understand that Hyperwave is not dependent on price whereas most other technical indicators are such as Moving Averages, Stochastic Oscillator, Moving Average Convergence Divergence (MACD), or the TD Sequential. All of those indicators need a price input to provide an output.

Hyperwave tells us exactly what pattern the price will follow before the move even begins. A hyperwave has seven phases and before one forms, this is what it will look like before it ends:

Hyperwave is the only technical system that projects the pattern. Hyperwave does not provide a price target for Phase 4 and it does not tell you how long it will take to get there. Limitations can be deduced through studying a large number of Hyperwaves.

The vertices that separate each phase is the variable that distinguishes Hyperwave from parabolic theory. A vertex is a point, it is not an area. It is one point between two lines that determine the next movement of price in such a way that when the vertex occurs price is going to respect the lines that are drawn in between the vertices.

The structure is predetermined before the price begins to rise. It is only after we draw the Third and Fourth Phases will we know the angle/shape which a particular Hyperwave (snowflake) will form.

Hyperwave is a specific type of bubble. This book will explore how to capitalize on the abundant amount of Hyperwaves that are currently active and it will delve into the underlying fundamentals that are their driving force. We will also begin to explore the ramifications of breaking down Phase 4 and entering into the prolonged bear market which is expected to retrace back to Phase 1.

Our goal is to teach readers how to trade Hyperwaves but we also want to begin a discourse about how to minimize the fallout as it relates to the overall economy. Hyperwaves are like rogue waves in that they form due to a culmination of an underlying storm, can cause massive destruction, and they completely disappear shortly thereafter. The only way to defend ourselves is through education, dialogue, and an open mind.

The current environment is not unique. There was another time, about 90 years ago when an inordinate amount of Hyperwaves swelled simultaneously. They collectively broke down Phase 4 during the same period in 1929 and this resulted in the Great Depression. We do not point out this corollary to scare readers into thinking that the sky is falling. Instead, we hope to use historical examples to shed light onto our current macroeconomic environment as a way to prepare for, and potentially mitigate, the fallout that we believe is coming in the next few decades.

History doesn’t repeat itself; emotions do.

D. Tyler Jenks, the inventor and developer of hyperwave theory, used it to earn enormous amounts of wealth for himself and his clients.

This book will dive deep into the theory that took Tyler a lifetime to develop. We will show exactly how Tyler was able to sell the top of the most prominent bubbles that have occurred over the past forty years, and we will provide a complete strategy that will allow readers to repeat this process.

There are currently more active hyperwaves than there have ever been in recorded history; therefore, hyperwave theory has never been more important. We will explore how to profit from these patterns, and we will delve into the macroeconomic repercussions of these financial rogue waves that are currently swelling in unprecedented proportions.

You will learn that all hyperwaves are bubbles, but not all bubbles are hyperwaves. Moreover, while finance is not exempt from wild emotional extremes, but hyperwave tell us exactly what pattern the price will follow before the move even begins.

Hyperwave theory gives us the only technical system that projects the pattern that predicts the direction of price movement. It helps traders and investors weather financial storms and make lots of money.

In this book, you will find out what hyperwaves are, how to spot them, and how to use them to help you earn enormous amounts of wealth.

D. Tyler Jenks spent his career studying financial markets and investments. He served as the president and CIO of Lucid Investment Strategies and president and CIO of Amivest Capital Management/NFB Asset Builder. He managed billions of dollars for institutions, charities, pension funds, and individuals for decades. He died July 23, 2019. This book is dedicated to his memory.


Leah Wald is a development economist, entrepreneur, and fundamental financial analyst. She worked at the World Bank, co-founded Veterati, and as a financial analyst specialized in Japanese equities. She is a contributing writer for Forbes where she writes “Tales From the Front Lines of Female Entrepreneurship.” She has a master of science in international management and a bachelor of arts in international political economy.