My Journey to Understand ... Black Hawk’s Mission of Peace

by Phillip B Gottfredson 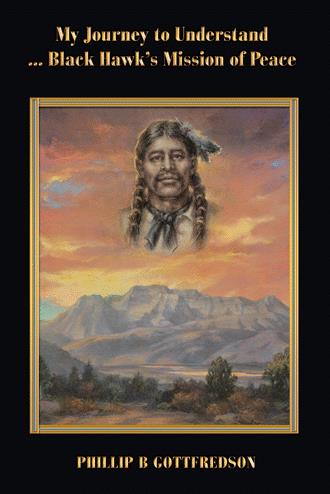 In the following years, Mormons would continue to pour in on the land of the Timpanogos at the rate of three thousand a month. It created confusion and upset the sacred balance of nature the natural order by cutting down trees, diverting streams, killing animals, and creating chaos among all living things thus setting the stage for a major conflict with the Timpanogos Nation, whose only want was to be left alone. They believed their sacred duty was to protect the sacred. The Mormons would later label this conflict The Black Hawk War.
The Mormon's war with the Timpanogos Nation was not a single incident. Researching the Black Hawk War for some twenty years, I was the first to publish that there were over 150 bloody confrontations between the Timpanogos Nation and the Mormons during the years of 1849-1872. Forty-one of those occurred during the year 1865, the date my great-grandfather Peter said the War began, which is one of the many arguments Native people have against Utah's one-sided history.
The war may have begun for the Mormons in 1865, but the Timpanogos have not forgotten the previous sixteen years when their Chief Wakara was murdered along with hundreds of their ancestors, all brutally massacred at Battle Creek, Fort Utah, and Bear River.
In my studies of the Black Hawk War, I wanted to believe that the people committing the atrocities on Utah's Native peoples were wretched people. Loathsome people. People who lived out on the fringes of society. People who had gone astray of any moral conscience or human decency. But they were people who after committing senseless murders would go home, tend to their farms, and sing hymns in church the next day. They were the bishops, councilors, businessmen, and exemplary folks in their communities.

The Timpanogos were first discovered by Spanish explorer Juan Revera in 1765, and later Dominguez and Escalante in 1776. They describe in their journals having met “the bearded ones” who spoke Shoshone.

Some seventy thousand Timpanogos Indians – the aboriginal people of Utah – died from violence, starvation, and disease after Mormon colonists stole their land and destroyed their culture over a twenty-one-year timeframe, but few people know anything about them, who they are, or what they believed in.

Timpanogos leader Black Hawk witnessed the worst kind of man’s inhumanity to man, and himself dying from a gunshot wound traveled a hundred and eighty miles on horseback to make peace with the white man, and apologizes for the pain and suffering he caused them, asking them to do the same and end the bloodshed.

Phillip B Gottfredson, who has spent decades living among First Nations people seeking to understand Native American culture, provides a detailed synopsis of the Black Hawk War of Utah that decimated the Timpanogos Nation from 1849 and 1873.

His account brings a much-needed perspective to a war that has historically been examined from the one-sided perspective of the Mormons. In collaboration with tribal leaders, he shares the Timpanogos version of the story, writing from the vantage point of the native peoples of Utah – a reference point that has been deliberately ignored.

Join the author as he shares his extraordinary spiritual journey into the Native America culture. and highlights a war that has been overlooked and misunderstood for far too long.

Phillip B Gottfredson is a recipient of the prestigious Indigenous Day Award presented by the Utah State Division of Indian Affairs in 2008. The day, was declared Indigenous Day by Gov. Jon Huntsman Jr. in 1998. Gottfredson spent over two decades learning from the Timpanogos, Shoshone, Paiute, Ute, Mayan, and many other Native tribes throughout North and South America. He was invited to participate in numerous sacred ceremonies and learned from traditional tribal elders and leaders. Gottfredson lived most of his life in Utah and now lives in Parker Arizona.