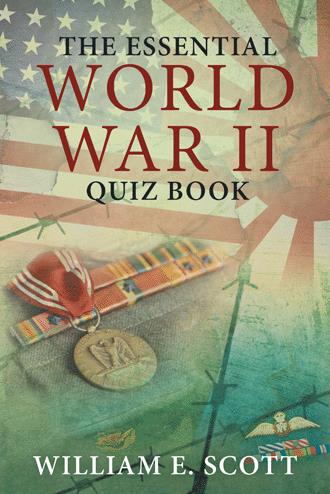 Do you know all there is to know about the Second World War? Test your knowledge of this titanic struggle by answering the 1,000 questions found in this challenging and fascinating new book by nationally recognized educator and author William E. Scott.

The youngest division commander in World War II, he later served as ambassador to France in the Kennedy administration

Before playing an undercover agent on the TV series Blue Light, this actor/singer starred opposite Julie Andrews and Richard Burton on Broadway in Camelot.

The standard rifle of the Italian Army, it was also the weapon used in the assassination of President John F. Kennedy.

World War II was a global conflict that tested the resolve of each and every competing nation on land, in the air, and on the sea. It was the quintessential struggle between good and evil.

The Essential World War II Quiz Book will challenge both the novice and expert with a thousand thought-provoking questions like:

• Which U.S. publication named Adolf Hitler its “Man of the Year” in 1938?
• Who was the first Native American to graduate from the U.S. Naval Academy and later command a carrier task force in the Pacific?
• Which reporter gave the B-17 Flying Fortress its iconic name?
• During which battle did the Japanese launch the first organized kamikaze attacks?
• How many episodes of Combat! aired between 1962 and 1967?

Whether you are a history buff, member of the military, educator, or student who wants to test their knowledge of the Second World War, this quiz book is a must-have resource.

William E. Scott is a former U.S. history and American government teacher and special programs coordinator. He earned a BA from West Chester University and graduate degrees from Villanova University and American Military University. A member of Phi Alpha Theta and Pi Gamma Mu, he was the recipient of the National Broadcasting Company’s Teacher of the Year Award and the Freedoms Foundation’s Teachers Medal. He lives in Springfield, Pennsylvania, with his wife, Diane.