Making a Difference in Our Father’s House 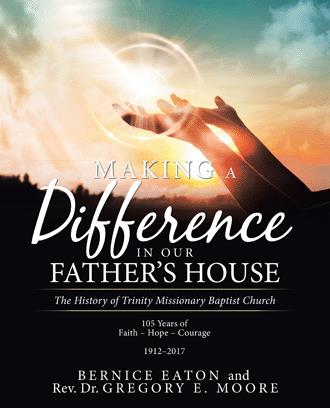 Thirty-five individuals separated from their church to begin the journey of creating a new church. This journey was filled with faith, hope and courage. They believed that they could make a difference in their community.

The remarkable guidance and leadership of three pastors stood out in shaping one hundred and five years of the history of Trinity Baptist Church. Reverend C.S. Wilkins, the first pastor, organized and named the church, Trinity Baptist Church. Reverend J.L. Walker, the eleventh pastor, was recognized for the completion of the church sanctuary. He designed a religious program for the college students attending Fort Valley State College, Fort Valley, Georgia. Reverend Julius C. Simmons, the sixteenth pastor, served for forty-two years. He left a legacy of fighting against injustice adhered to by segregation in Fort Valley. The annex became a meeting place for local organizations. Political and economic issues were discussed through forums and brought to the attention of the people. Trinity became known as the People’s Church.

In the book, Making a Difference in Our Father’s House, the authors Bernice H. Eaton and Reverend Dr. Gregory E. Moore chronicle the history as well as its contributions to the community in the creation of Trinity Baptist Church in Fort Valley, Georgia.

In the early 1900s, thirty-five individuals left their current church to venture on a journey of starting a new church. This journey would change not only the community, but the lives of many. In Making a Difference in Our Father’s House, authors Bernice H. Eaton and Reverend Dr. Gregory E. Moore chronicle the history of the creation of Trinity Baptist Church in Fort Valley, Georgia.

Eaton and Moore pieced the history together from written and oral resources including financial records, the first warranty deed, programs, conference minutes, minute books, newspaper articles, correspondence, written and oral histories, books, manuscripts, and census records. It presents a look at everything from the church founders to its pastors and leadership, and its programs and outreach.

Making a Difference in Our Father’s House shows that throughout its history, the members demonstrated their faith, their hope, and their courage as they went about doing God’s will. They worked to make a better community for the people of Fort Valley and Peach County becoming known as the People’s Church.

She is married to the late Dr. David Eaton. They are the parents of David Millard, II, Deidre Elaine and Darryl Hayes Eaton. She is the author of a self-published family genealogy, “If I Had the Wings of An Angel!” She is a member of Delta Sigma Theta Sorority, Inc. She served as Archives/Heritage/ Historian Chairperson, Fort Valley Alumnae Chapter and wrote “A Historical Perspective of the First Twenty Years”. She was appointed Archivist of Trinity Baptist Church by the late Rev. Julius Simmons.

He is the author of two books, “Ready to Teach Bible studies: 52 Bible Studies for the Entire Year” and “What God Expects of Every Christian.” He is married to Dr. Helen-Louise Moore. They have three children, William Gregory, Mary Grace, and Cristiana.