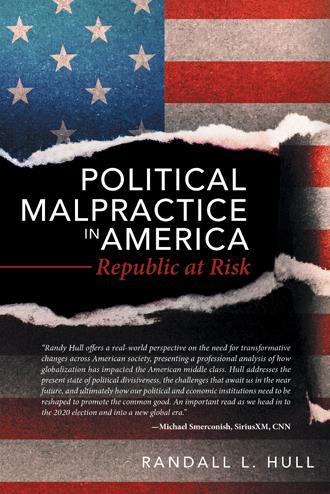 Divisiveness pervading all aspects of our society, political rancor displayed every night on television, increasing incidences of domestic terrorism, and growing income inequality crushing the middle class—these conditions are all threatening to destroy our culture, and our historical legacy as a beacon of freedom and progress to the rest of the world. I am genuinely distraught with the current state of our union. As a retired corporate executive, with more than forty years of global experience, with both an analytical mind and a deep love of American history, I believe I have a unique perspective on how we got into this mess and how we might find our way out. The ultimate objective is an economic one—the restoration of a large, vibrant middle class. However to get there will require a transformation of our politics, and more fundamentally, our culture. These transformations will be difficult and challenging.

In just the past decade, an increasing number of excellent books and articles on globalization, capitalism, inequality, and political divisiveness have been published. I have read many of them and will cite several throughout this book. However, I think most of these approaches are too narrowly focused. You cannot simply focus on politics, or the economy, or the most recent presidential administration; all these elements are interrelated. A narrow focus will only treat the symptoms and not the underlying root causes, which go back at least forty years as I will demonstrate.

My focus is on the interaction of several related forces: (1) the US economy and its interaction with the global economy over the last forty years; (2) how the resulting era of globalization has crushed the middle class, and in doing so, has generated significantly increased income and wealth inequality; (3) how socioeconomic polarization has led to political and cultural divisiveness, as well as well as economic polarization; (4) and finally how negligence by our political leaders has allowed this to happen. I conduct this evaluation in the broader context of American history and our unfolding legacy, and postulate that our legacy may now be at stake. My intent is to present an integrated analysis and discussion.

Beyond simply a diagnosis, my goal is to provide a unique historical perspective to the analysis, along with detailed recommendations for solutions to our political and cultural divisiveness, as well as economic. My analysis delves into interaction of politics, business, the changing nature of capitalism, and the global economy. I attempt to present my analysis and opinions in an historical perspective framed by two bookends. The first being a look at the politics and economy at the beginning of our republic when our founders expressed belief that our virgin and fertile soil, perfectly formed to provide an equality of conditions for all, was a gift of Providence. I will frequently come back to the equality of conditions concept, first coined by Alexis de Tocqueville, who spoke to how critical this concept was to the successful birth of our republic, and how we might create a present-day analogous condition. The final historical bookend is a present-day look to the future, wondering if America will continue as an enduring example to the rest of the world for progress, shared prosperity, benevolent power, and “with liberty and justice for all.” Achievement of the latter seems more in doubt than at any time since the Civil War as I, and many others, believe.

Could the great American experiment, as de Tocqueville described to us in his 1835 book, Democracy in America, be closer to the end than our beginning? In the early nineteenth century, when he looked into the future, he thought that in succeeding generations “all of the world will be America.” In fact, that seemed to be happening late in the twentieth century with the fall of the Soviet Union, the expansion of NATO into Eastern Europe, and the opening of China to a market-based economy. Sadly, almost all those reforms have been reversed in the last twenty years. Nationalism, right and left-wing extremism, and global terrorism seem to be on the rise almost everywhere in the world. The European Union, once the political and economic mirror image in the Eastern Hemisphere to the USA in the West, just recently formalized Brexit, no doubt to the extreme delight of Vladimir Putin, who now looks to be a ruler for life in Russia.

America is more divided now than at any time since the Civil War; survival of the republic is at real risk. Americans are losing confidence in the future and have almost no trust in our federal government. Our federal government has failed to respond effectively to the Covid-19 pandemic to arrest transmission and restart the economy. At the same time, we are seeing historic, widespread protests against systemic racism in America, which in itself is a manifestation of increasing inequality, as well as deep cultural bias. Our political leaders have failed us for the last forty years.

Randall L. Hull proposes that startling thesis in this economic and political commentary that examines how we’ve arrived at this crisis and what we can do to reverse the political and cultural warfare that pervades our republic. He answers questions such as:

• What steps can we take to reduce divisiveness in America?
• How can we restore shared prosperity to the majority of Americans and rebuild our middle class?
• How can we get politicians to work on a bipartisan basis again?

Hull offers starting points to pursue a model of “balanced capitalism” based on large private-public partnerships to rebuild American infrastructure and new green energy capacity; such investments will both reduce disparities of wealth and begin to reverse damage from climate change. He also proposes ways to safeguard our elections and live up to the ideals of our founding fathers, the most important initiative of all.

Find out how to keep working to “form a more perfect union” and fight political hypocrisy with the insights and ideas in Political Malpractice in America.

Randall L. Hull is a retired global business executive who worked in the energy and chemicals industries for over forty years. He is an honors graduate in mechanical engineering from Lehigh University (1973) and also holds an MBA from Harvard University (1978). He is a member of the American Institute of Chemical Engineers and a member of both Tau Beta Pi and Pi Tau Sigma engineering honorary societies. He is married to Patricia Perrin Hull and is the proud father of two daughters. He has enjoyed a lifelong love affair with U.S. history and lives in Houston, Texas.