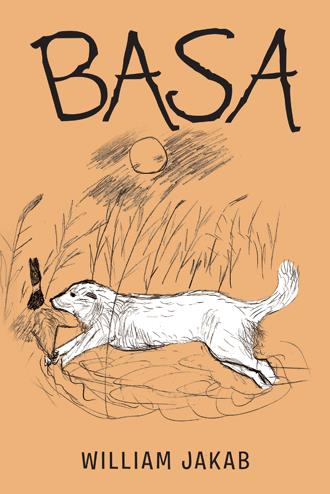 Basa was just a little puppy when her new master brought her home from the reeds. The moment Basa’s new master, a peasant, saw the little strong looking white-as-snow puppy dog; he liked her and gave a bucket of wine to the head-shepherd---Basa’s former owner. The head-shepherd looked after Basa sadly and said to the soon-to-be owner:
“This puppy is going to grow up to be a big strong dog- a good dog”
The peasant then looped a rope around the little dog’s neck, tipped his hat, and within a moment, they vanished amidst the labyrinth of reeds.
Taking a deep breathe the head shepherd sighed aloud to himself,
There are as many dogs here as there are fleas. Can’t use them all anyway, they’re only good for hunting and prowling. Though I did feel the need for this little wine, perhaps Look-out, Basa’s mother, would bare another puppy, just like Basa, in her next litter.¬
That was how Basa came to live with the Fodor Balasz peasant household.
For the first few days the Fodor Balasz family tied her up with a rope to make sure she could not cut loose and run away. A little puppy like Basa could get into a lot of trouble. Somebody could steal her, a strange dog from the reeds might bite her, or a wolf could have a meal out of her.
Stretched out like a white fur cap, Basa laid down all day at the end of this rope, looking toward the reeds which grew at the edge of the Fodor property. She listened to the swaying stalks whisper and rustle. At nightfall, when the sun went down, and everything became dark, Basa would cry and start to whimper in a low grumbling voice; she longed to be back with the rest of her family. Basa missed her brothers and sisters, and her mother Look-out. In her sleep Basa cried as she dreamt of her mother herding the sheep, leaping high, jumping left and right, keeping the herd together. Basa also dreamt of her brothers and sisters as they played around her old master; the head-shepherds’ feet, tugging and nipping at the hem of his long trousers. The cold and the dark reminded Basa that she was alone without her brothers and sisters and she missed the warmth of their fur coats beside her.
In the swampy marshland of her birthplace, flocks of sheep took rest for the night. But all the new scents and never-seen-before animals at her new home: horses; cows; hens; and geese, tickled her nose. Never before had she sensed the strong unpleasant smell or felt the touch of any other human, else than the head-shepherd. Though the head-shepherd had a strong, unpleasant reek, there was a delightful ecstasy to be had amidst her brothers’ and sisters’ different exhalations of breath and a sheep’s strong, strong, sweat steams. Here, at once, a thousand shimmering things she had never known.
The Fodor Balasz household consisted of a newly-wed couple. The man was quiet, and his stature was very tall and lean, yet his build was also very strong. He spoke little, the type of man who chose his words carefully. The peasant’s strong-working arms never made any unnecessary movements. Fodor’s temperament was probably the reason he never stroked or caressed Basa. Basa’s new owner had strong-willed and motivated thoughts to make Basa the best watchdog. Fodor did not want to spoil her nature, the toughness of a Kuvasz’s (the type of dog Basa was) over thousand year long stretch of breeding. Fodor’s wife was completely different from her husband. The woman was a little chubby, and her mouth never stopped- like a brook over flowing. The heavy farm-work she had as her tasks could not kill her light, bubbly nature. Fodor’s wife always found time to feed Basa, patting her on the head and stroking her behind her ears. “You little lambskin”, she would say. At these times Basa felt like she was in heaven. Eventually Basa felt less homesick, especially while the woman pet her.
The reeds Basa came from, and the village her and her new owners lived in blended into each other like a foggy haze. Basa felt the inner struggle of missing the music from the reeds she once knew so well. Basa felt the reality of her present, and dealt with her past which was long-gone. As the time passed, Basa began to accustom herself to the village and she knew all the animals and peoples. Basa also worked hard. If a cow was hesitating to go into the barn, Basa drove the cow in and barked with authority. Basa also knew she was to never touch or bite the chickens in the hen-yard, but had the authorization to denounce them if they got into the vegetable garden.
As for the pigs, it was best to just grab them by the ear and pull them down to the ground, especially when they got wild and started running like mad.

In the beginning of her stay in the village, Basa had a lot of trouble with all of the other dogs there. Basa came home many times with bloody wounds all over her body and torn up skin. Even though Basa was much bigger than the treacherous neighboring spotty dog who was a real sneak, Basa often got nipped and ran home crying. Eventually, Basa's time came. Once this beautiful Kuvasz turned one and a half Spotty started a fight with Basa.. Basa lifted Spotty by the neck and into the air, shaking him until a large piece of skin was left between her teeth. With her first taste of blood, Basa became fearless and courageous. A week after Basa and Spotty's fight, Basa beat up the village’s strongest dog. After that, no dog in the village would start a fight with Basa.

By the time Basa was two years old, she grew even bigger in size- she was huge- the size of a calf. The muscles of Basa's strong neck were as tight as a taught rope, her paws left hand-sized prints, and with her bare weight she was able to tip over a strong man. Basa was able to pull down a big bull and make the bull stand completely still. The peasant, her master, liked to brag that Basa was able to stop a runaway four-horse coach. This dog had smooth snow white hair around her shoulders. Basa became the ruler of the village, and was she afraid of any man or animal. She never picked a fight however, for she inherited a pleasant and peaceful nature from her shepherd mother.

Aside from her original job as a watchdog, when her masters were safe at home, Basa hunted all day in the reeds. Basa felt free in her life as a hunter. All night Basa was at home watching the house, half-asleep and half-awake- always aware. The smallest noise would wake her up. The serf, like a peasant, did not usually have fences- Basa drew her own boundaries. If anybody crossed her realm, all they would see is a white wolf-like shadow. Basa would attack an invader by flying in the air and growling in a deep tone- any man would fall down under her weight and he would experience a snarling giant dog flashing teeth at his throat. Fodor Balazs would come out with an ax, scared to death- relying on Basa's protection- when the thieves or drunks had crossed the lines Basa defended. Whoever it was, whether it be a thief or a drunk, of which there were lots in the village, Basa would watch and look at the invader, snarling, until her master would reach out his hand and patted her on the head.
“No, no, Basa. What kind of killer temper have you?”

The man who invaded the Fodor Balazs and Basa’s territory started to quiver from his near death encounter. Basa’s master, unlike the drunk or thief, had no reason to be afraid of his dog. When Basa opened up to somebody that somebody would stay in her heart forever, nothing could falter her tendency to love them. Any negative situation thrown upon her could not make her angry, not even the time when Fodor Balazs took away her newborn pups and drowned them in the water. For two days she had had a bursting nipple, and from morning to evening her nose was down to the ground looking for what was left of the scent on the riverbed, before her pups were tossed into the water.

Basa is a tiny, snow-white Kuvasz puppy when she begins living with peasant newlyweds intent on turning her into a guard dog. As Basa grows into an adult dog with a pleasant nature, she becomes the ruler of the village who is unafraid of both man and other animals. But one day when Basa hears a group approaching her house on horseback, her life is altered forever.

After the invading German soldiers beat her beloved master, Basa bravely attacks the men, until they overwhelm her, kill her master and his entire family including Basa’s only pup, and whisk her away as a prize dog for their captain. But when Basa manages to escape and finds her way into the wild countryside to live amidst the reeds, she meets a wolf who soon becomes the father of her new litter of pups. Now as she begins a new adventure, Basa must teach her pups how to survive in an unpredictable world where life is never taken for granted.

Basa is a story of survival, hope, and love as a Kuvasz puppy grows into an adult dog who must bravely make her way in an uncertain world after her master is killed.

William Jakab is a Hungarian boxing champion, eight times over, as well as an Olympian who placed ninth in the Montreal games in 1976. After earning an associate’s degree in criminal psychology and philosophy, he worked as a police officer before eventually leaving Hungary for Germany and then the United States. Jakab has been a bodyguard for many famous figures including Donald Trump, Elton John, Julio Iglesias, and Bruce Willis.