The Critters of Walnut Creek 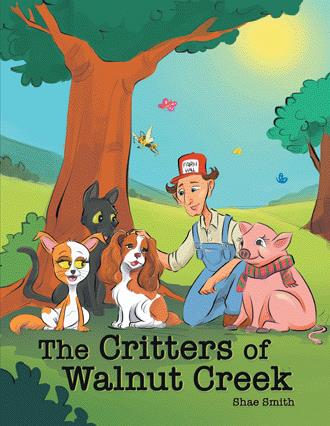 Fred made his usual trip to Walnut Creed. He saw Oda at the general store which her parents owned. Fred asked Oda if she had any idea what Vester really wanted for his birthday. He explained that he and the critters just couldn’t decide what to get him.

Oda said, “OH! I know exactly what Vester wants! The last time he was in town, he said that he loved that big ball of red yarn in the window.” Fred said, “Oh, Oda! It’s perfect, but I’ll have to check with the other critters first. After all, the gift is from all of us.”

Fred hurried back to Rock Grove on his scooter and called all of the critters together. He told them about the beautiful ball of yarn and how much Oda said that Vester had admired it. They all thought it was a wonderful idea and were very excited about it.

It was late afternoon and Fred had his evening critter chores to tend to, so Bailey said she would go back to Walnut Creek and get the ball of yarn for Vester. Penelope said, “Bailey, that’s a great idea, but hurry back to help me prepare for the party.” Bailey said, “No problem.” So she left for Walnut Creek right away.

Bailey reached the General Store just as Oda’s parents were locking up for the night. She explained to them that she was a friend of Vester’s who was a friend of Oda’s. Oda’s parents gladly let her come in and buy Vester’s present-the ball of colorful yarn. Bailey was so happy. She just knew that Vester was going to love his gift.

Since it was getting late, Bailey decided to take a short-cut which led through Thunderwood Trail. Since she was a special firefly with two lights instead of one, she felt sure that she could light the trail well enough to see her way through. In her haste, she forgot how dangerous the trail was. Bailey had not been on the trail for long when the end of Vester’s ball of yarn got caught on a piece of thunder wood.

As she hurried through the trail, the ball of yarn began to unravel. Bailey was in such a hurry, she did not realize what was happening. She was very concerned about getting home before dark, but she suddenly noticed that the beautiful ball of yarn had come completely unraveled. Just as Bailey began to slow down, a net was thrown over her and she was pulled to the ground! It happened so suddenly that she could not escape being caught in the net.

A young boy named Joe had caught her. Joe was very interested in insects. He did not want to hurt them, but he loved to study them. Poor Joe had no idea what he had done. He had never seen a firefly with two lights before, not to mention one carrying a ball of yarn the size of the one Bailey was carrying. It took some time for Bailey to realize what had happened to her. She tried to talk to the little boy and explain who she was and where she was going, but she realized that Joe was not like Fred. He couldn’t understand what Bailey was so desperately trying to say.

On a small farm in Georgia called Walnut Creek, lives a gentle caretaker named Fred who has the unique ability to understand and talk with the critters who reside there. A picture book for children, The Critters of Walnut Creek shares three stories of Fred, the farm, and the animals.

The first tale tells of Penelope, a pot-bellied pig with a broken leg abandoned on the side of the road by her cruel owner. Fred and Pretty Girl, the spaniel, find Penelope and take her to Doctor Sheba, the timber wolf, who fixes her leg. The critters welcome Penelope to the farm and help her heal. Penelope learns to be strong and never give up.

The second chapter shares how Bailey, the firefly, gets lost in the deep, dark woods on a stormy night. Her adventure ends at a birthday party for Vester, the cat, where all the critters discover that what makes a gift special is the love and thought behind it. Finally, “The Beauty Contest” narrates the story of Oda, a tiny kitten, who enters the Miss Critter Contest and discovers the true meaning of beauty and love.

Shae Smith was born in Gadsden, Alabama, and now lives in Atlanta with her husband and her rescue puppy, Cleo. Her stories are filled with colorful characters inspired by the animals she’s encountered during her lifetime.