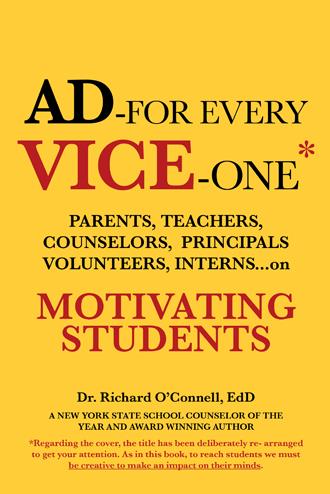 This book has three main components:

PROGRAMS, REFLECTIONS AND ANECDOTES for the sole purpose of

The Anecdotes are stories, instances and advice which the reader is asked to adapt to her/his special circumstances.

The Programs are actually innovative plans for in-school action.

The Reflections are personal thoughts and ruminations on important school concerns.

Do You Know How to Hitchhike?

The basic approach to this book is that everything in the book can be applied with a little imagination.

THREE SAMPLINGS OF THE ABOVE

AN ANECDOTE: This is one of over 40 anecdotes in the book. Some are shocking; some are funny; some are very didactic; but all relate to motivating students.

Prepare to Be Shocked

In some cases the faults, failures, indiscretions and personal hygiene of our students must be kept confidential so as not to embarrass the student.

In this case a youngster in middle school came to school each day with a particular unpleasant odor coming from his person. His teacher eventually called him aside. And as he came towards the teacher the odor got worse to the point where the teacher realized it was coming from his tie. In the day when students wore ties, this young man never remade the tie and just slipped it on each day.

Upon examining it, the teacher discovered...a dead mouse, lodged in the webbing of the tie. If the teacher exclaimed, “OH! My god, a mouse!” such a revelation to the class would have been a grave embarrassment for the student. And probably, it would have given him a nick name that would follow him for years.

The teacher discreetly invited him to step outside and requested he go to the bathroom and dispose of the tie in the garbage. This is a true story and in the course of your work many such embarrassing moments may happen. The point is always to safeguard the self-esteem of every student.

A PROGRAM FOR SCHOOL IMPLEMENTATION

The following program is regarded by the author as perhaps the most effective idea in the book. If no such program exists in the school, the parent should enlist the principal or counselor to reach out to IMPLEMENT IT. Teachers would have the option of actually implementing the program in their own class.

THE MOST IMPROVED STUDENT EVENT

FOR STUDENTS RISING FROM FAILING TO PASSING*

*Please note in the evaluation below, 87% of the students who participated in the program passed the subject in June.

There are several ceremonies to recognize high achieving students for their academic or athletic achievements. Rarely, are students struggling to rise above failing grades recognized for their

This event takes place in a public ceremony, which significantly impacts the total school community, including parents.

Steps for the implementation:

1.Through the auspices of the school principal, teachers are invited to nominate students who have made progress in their subject from a failing student to a passing student. Teachers are happy to do this since it benefits them and as well as their students and especially their successful failing students.

(This program continues on for several pages of explanation, implementation and with the actual results of a student evaluation.)

For years I would pass a public school which had mostly minority students in their student body. I judged them by their appearance as they left school dressed in the style they favored: turned baseball hats, dreadlocks, baggy pants worn below the belt line. The girls would have varied colored hair and the fashion of their neighborhood.

I would look at them in an academic condescending manner. I would misjudge them and think poorly of them as students. Years went by working with an all white student body, in a high income area, then I finally retired.

Ironically, I decided to volunteer in the very school that seemed threatening and academically inferior to what I was accustomed.

My intent was to help these kids with the college/career admissions process. And as a counselor with another MA in English literature, I would work on both their grammatical and linguistic skills, I have done so for the past 11 years as a volunteer In any situation where I could motivate them to aspire to higher goals, I would. As a counselor, I used my best techniques to do so.

I found in the process that these youngsters would have difficulty with finding a topic that they could sustain in an essay. I finally found the answer. I would ask them if they could think of something in their life that was shocking, unexpected or tragic (beyond the death of a grand parent).

One young man came up with a shocking example. He wrote, “When I heard the police siren, I knew they were coming for my father, mother and aunt. They took them away to jail after finding cash, guns and drugs in our apartment.” This story in itself is enough for a good essay especially if the student spoke of his reaction to this event and how he handled it. The reader would certainly learn something of his character.

Yes, at first it was both shocking and tragic. Then I began to think beyond the story. This was one of the same boys I spoke of earlier who typified the image and perspective I had of the students leaving this minority school.

Then I said to myself, “Hey, wait a minute? This youngster is in school today working on his college essay. He is here with no parental support, focusing on a college essay, with aspirations well beyond cash, drugs and guns. He could easily be on the street with his friends, free of the restraints of school. This young man is heroic!”

And what a misconception I have been living under for years!

I was soon to learn there were many other students with stories beyond the pale of normal circumstances and just as heroic. (This essay continues.)

This collection of programs, anecdotes, and reflections seeks to accomplish what may sometimes seem like an impossible task: motivating students.

Dr. Richard O’Connell, EdD, who has helped countless students over a career spanning more than forty years in New York and New Jersey schools, shares an array of tools and insights to help you promote student achievement.

The programs are actual plans of action to influence students, which have been incorporated into schools.

The anecdotes are stories, instances, and advice that you can adapt to your own special circumstances. They are printed in bold so you can find them easily.

The reflections are the author’s thoughts and ruminations on important concerns that pertain to students.

As you read, you’ll discover the importance of looking beyond appearances, finding out what motivates students, how to engage with them, and how to get them excited about learning.

Whether you are a parent, counselor, teacher, principal, volunteer, or intern, the advice in this guide will help you make meaningful progress in promoting student achievement.

All royalties willl be donated to charities.

Dr. Richard O’Connell, EdD, has helped children as a district guidance coordinator, assistant principal, director of guidance, and counselor in various New York and New Jersey public and private schools over forty years. He is the recipient of numerous New York State and Nassau County Counselors Association awards, including Counselor of the Year, for his innovative programs and publications dealing with all aspects of school counseling services. For the past eleven years, he has volunteered in a minority school assisting students in the college/career admissions process.