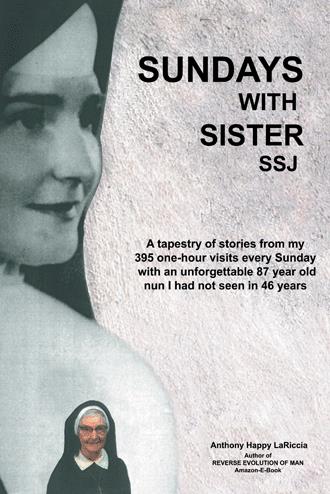 I was debating what I would say when I first saw her after 47 years. I just can’t stand here

Looking at Sisters door in this convent. I reached out and knocked on the door with a famous knock:

“Yes, come in “ said a faint voice from within the room.

I opened the door and yelled. “ Holy smokes your alive!

“Well I hope so.” She replied

The story Sundays with Sister ssj shines a light on a nun who left an indelible impression on everyone she touched especially a second grade student who 47 years later , at 54 years old met her every Sunday for an hour without a miss lasting 7 ½ years.

His Sunday visits always revealed Sisters unique personality. It also uncovered unique stories like meeting a Mensa Whore for lunch, A wild car ride in winter with two Carmelite nuns, The story of a nun who mothered 125 babies while living in the convent and the back story of why she became a nun; Intimidating the general manager of a cable company to hook up cable at the convent so nuns could watch Pope Paul 11 visit to the United States in 1993, Meeting a mannequin nun and her “trick” ruler, Watch what happens when a Carmelite monk meets a 104 year old nun, Read about Sisters flying friend a parakeet named Jose’, Find out what scared all the nuns that was in the field surrounding the convent Learn about Sisters two brothers who, at the age of 20 in 1920, walked from their home in Erie, Pennsylvania to California pushing a cart with utensils and a two man tent, then living in that tent for ten years with a cat called Felix….Plus many other true stories that are fun to read.

Anthony H. Lariccia attended Gannon University in Erie, Pa. majoring in Biology/Science. He held positions in Research & Development from 1963-65 at Erie Technological Products In Erie, pa., a manufacturer of electronic components used in space exploration. From 1963 -67 was a Medical Specialist in the Pennsylvania National Guard, 112th Infantry Division

In 1963 he accepted a position at American Sterilizer Co, (AMSCO) in Erie, Pa., a manufacturer of operating room equipment as a research scientist and held various R & D and Marketing positions during his 33 years employment, retiring in 1998 with company sales of $500 million. During his employment he obtained many patents and was awarded the companies Vice President Award for outstanding achievement as a scientist. He also received an accommodation letter in 1967 from John Edgar Hoover, Director of the FBI for outlying a procedure to locate kidnappers who sent ransom letters. He was the youngest of 50 microbiologists from around the country that was invited to attend a one week training course in 1966 sponsored by the Center for Disease Control in Atlanta, Georgia entitled “Microbiology of the Hospital Environment.” In June, 1973 he was awarded an honorary Doctor of Science degree sponsored by Dr. John J. Perkins, Vice President of Research, AMSCO.

In November 1981, The Pet Dealers magazine devoted a full page to publishing his letter on Page 9, warning that a dog vaccine being used by veterinary doctors was causing and not preventing “parvo” a deadly virus that was killing many pets across the country. He was also recognized on January 1993 in the NASA Tech Brief magazine, Volume 17, number 1, for writing one of the top 1992 letters in a contest sponsored by 16 scientific magazines.

A 5-page paper was published in 2010 in the peer review magazine Journal of American Science, 2010, Volume 6, issue 10, cumulated No. 10, ISSN 1545-1003 entitled “REVERSE EVOLUTION: The Evolution Darwin Never Saw Supports Creation. “ You can read this thesis paper by entering the title into the Google search engine. In December 2014 this paper was presented in novel form and published as a 200 page ebook entitled “REVERSE EVOLUTION OF MAN” by Amazon (Kindle/windows): APPLE (ipad/Mac) & Barnes & Noble (Nook)’