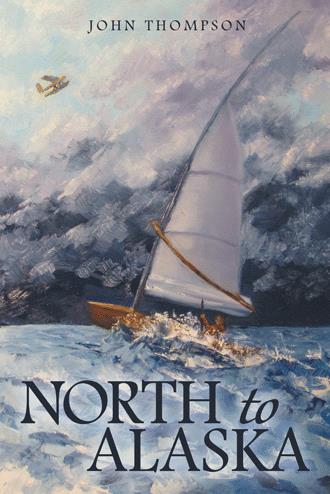 By seven, the clouds ahead had become truly ominous. They had merged and risen to a true cumulonimbus shape meaning dangerous winds are likely. The lower portions were dark gray. Lots of rain coming as well. Somewhere to the west, maybe Port Hardy, the folks were about to get slammed. Bobby tried to judge how far off it was and thought he could make it to Port McNeil. He took in a second reef in the rising wind and settled in for a long, wet ride. The wind was already over twenty knots, but Strad was sailing easily with two reefs. Port McNeil was still ten miles ahead, about two hours away. The sun had already disappeared, and the wind had gotten colder. Bobby had expected the storm to blow out over Port Hardy, but that wasn't the case. The sky was fast turning black. Lightning flashed up ahead striking the sea. The horizon was gone. The waves had actually abated a bit as he neared Cormorant island, and the wind was being affected by the islands as well. It was no longer consistently in his face but kept shifting wildly from side to side making sailing difficult and frustrating. Looking astern, there was no sign of the trimarans. They had either sought shelter or gone north of Malcolm Island. Bobby hoped for their sake that they sought shelter. It was time for him to consider doing the same. Maybe he should seek shelter now. This was not the type of storm to take a small boat out in. It was readily obvious that he wouldn't make it to Port McNeil. He decided to seek shelter in Alert Bay on Cormorant Island instead. It was just ahead on the starboard side, maybe fifteen or twenty minutes at the rate he was sailing. The daredevil in him wanted to try his hand at sailing in the storm since shelter was so close. But he also knew that this storm could pack gusts of well over fifty knots and if he couldn't handle the wind under sail, he wouldn't be able to douse the sail or rig the cockpit cover. It was now or never. But if he stopped now to douse, he would get surely caught up in it. Finally, thinking of Hali and the safety rules that he had agreed to, common sense prevailed. Bobby made the decision to douse sails altogether. It was no easy task in the twenty plus knot winds. Strad was in the trough and rocking wildly with the waves. He managed to put on extra lashings around the sail, then fought the cockpit cover for a good ten minutes before succeeding. While this was going on, Strad had been swept to the west and was no longer in the shelter of the island. Settling into the seat, Bobby struggled to get her underway in the swells, but finally got her bow into the waves and started to make forward progress towards Alert Bay about two miles ahead. Viola approved as she came out of her box and perched on his shoulder.

No sooner had he had passed Gordon Bluff on Cormorant Island, when the storm hit with a fury. Even with the sail down, Strad was tossed on her side and spun backwards. Rain came down so hard that Bobby couldn't see where he was going, and he thought the canopy might tear off in shreds. Pedaling furiously and timing the waves, he finally got the bow pointed back into the waves. But forward progress was all but impossible. He couldn't see them, but he knew the shorelines on either side were deadly dangerous. He was safe for now in open water, but he was working hard at the pedals. Viola understood the danger from the moment they were tossed on their side. She understood the severity of the storm and how hard Bobby was working to keep them safely pointing into the waves. Instead of hiding in her box, she perched quietly on Bobby's shoulder and listened to the wind and rain. Occasionally, she would let out a low guttural growl at the storm. And occasionally, she would rub her cheek encouragingly against Bobby's ear. There was no helping it, Strad was crashing from wave to wave, shuddering with every impact. If Bobby tried to steer anywhere but right into the wind, the bow would be blown right around out of control. The rudder was barely useful at all due to their slow progress. A sea anchor is what he needed, but he didn't have one. They don't sell sea anchors sized for sixteen-foot boats.

Little by little he was working over to the starboard shore. Ahead lay Alert Bay, though he couldn't see anything. Surely there would be shelter there. As he worked to starboard, the waves became worse and his forward progress was halted. He guessed that the wind was blowing well into the forty-knot range with gusts into the fifty-knot range. Another rule to add to his list - watch violent storms from the safety of the nice warm living room. Boating in a storm sucks! Everything through the dodger windows was black with the exception of flashes of lightning. Thankfully, the lightning was still off ahead. GPS was telling him that he was nearing the shoreline. He must at all costs stay off the shore. He had seen the rocks and the steep bluffs on Cormorant Island. He probably would not survive being swept ashore. And Viola kept reminding him of that. His legs were getting tired now, but he kept on pumping the pedals. He tried the spotlight through the dodger, and immediately blinded himself. After letting his eyes recover for a few seconds, he stuck the spotlight under the canopy into the storm and shone it forward. What he saw terrified him! There was a huge section of broken dock bearing down on him dead ahead of Strad's bow!

Every year, the Race to Alaska challenges the skill and daring of many adventurers as they transit 750 miles of the Inside Passage from Port Townsend, WA to Ketchikan, AK. Along the way, they face gales, dangerous currents, orcas, and even grizzly bears as they race north. No motors or outside assistance is allowed. All boats must be manually propelled along with the use of any sails. No other rules. $10,000 to the winner and a set of steak knives to the runner up.

The race begins long before the starting gun goes off. Gerald wants to sail the smallest boat ever to finish the race, which requires a custom-built boat. A medical emergency throws the whole project into jeopardy, but his dutiful son, Bobby, steps up at the last minute to build the boat for him. Of course, nothing goes as planned as time is short and an unexpected romance threatens to derail his schedule.

Eventually, they succeed and get the boat to the starting line and that’s where the real adventure begins. A race within the race develops to see who the first solo finisher would be. Six teams chip in $200 each, the winner takes it all.

John Thompson is a retired member of the United States Coast Guard and life-long sailor and racer. He spends his summers cruising the Inside Passage of British Columbia and Alaska and his winters traveling the United States in a motorhome with his wife. John completed the Race to Alaska in 2016 in six days in a thirty-eight-foot ocean-going racing catamaran.