Little Miss Inappropriate and the First Day of School 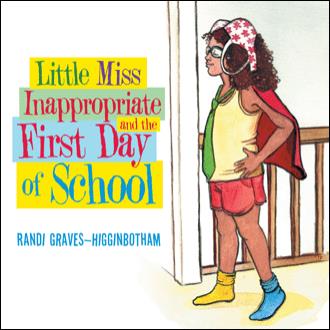 “Well I don’t know about that.” He began then paused. He stood up and took a hard look from bed to floor at his daughters shambled room. “Lou, you are definitely your father’s daughter.”

“Mommy says that all the time. Mostly when she’s helping me clean my room.”
Daniel Sanchez, laughed aloud. “I suppose she would. Here Lou.” He said handing her his tie. “This is my lucky tie. And I want you to have it for your first day of school.”

“You have a lucky tie, daddy?” Lou, asked grabbing the tie and immediately putting it around her neck. She admired her reflection in the mirror. And before her father could speak, she screamed, “And my super girl cape!”
Off she ran to her closet. Throwing the door open, she dove head first into an even larger pile than the one on her bed and began to rummage to the bottom.

“Your what?!” He turned his head as he watched Lou, disappear into the mounds of clothing and deep closet. Within seconds Lou, pounced back into the room. Landing in the center amidst all her clutter proudly wearing a red cape over her tank top and shorts.

“Now I really have my mojo, daddy!” She declared as she grabbed the edge of the cape and twirled about in front of the mirror. “I’m ready to go.”
“Dressed like that?”
Lou, thought for a moment. “You’re right! In order for this to work I’m going to need a complete outfit.” And off she went. Out her room and down the hall.

“A complete what!?” He shouted after her.

“It’s what Charlotte’s, always yelling about when what she’s wearing just isn’t enough.” He heard her say as she darted from one room to another. Before her father had a chance to think over what she was actually saying to him, or doing, Lou, appeared before him in the doorway. Daniel Sanchez, froze. It took him a long moment to adjust to what he was seeing. There stood Lou. Hands on hips in her best super girl pose. Her red cape taking flight in a soft breeze.
“Uh, Lou,” he said with an open mouth and blank stare, “are those your sisters’ goggle’s you’re wearing?”

“Yes, they are.” she said proudly.

“Don’t be silly daddy. This isn’t a hat. It’s mommy’s lucky bra. And today, it’s my crown.” Her father stood motionless. There on Lou’s’ head stood perfect mounds of soft cotton and wire. Rounded peaks of pink flowers layered over soft white. He was staring at his wife’s bra. On his daughters’ head. “I think the pink flowers make me look more like a regular girl.” This she said with a motion of her fingers in the form of bunny ears. “And not just a super hero. Wouldn’t want to make the other kids feel bad.” Daniel Sanchez, dissolved into a fit a of laughter.

“I look good, don’t I?” She smiled and nodded at her father as she bounced to her mirror and took it all in. Her father did his best to muster words through uncontrollable laughter while Lou, pranced about the room striking the air with kung fu kicks, stances and super hero poses. “What do you think mommy’s going to say?” Daniel, sat up, slightly hunched over wiping the tears from his face and cleaning his glasses with one of Lou’s’ tops. He turned to see his daughter through squinted eyes forced in by the weight of smiling cheeks. “Well, I'll tell you one thing,” he motioned with his glasses in hand, “you may want to use those super powers of yours and breeze out the front door. She just may have you take off that crown of yours.”

Lou turned to the mirror and got one last look in. “Nah! She knows a good thing when she sees it. She’s always telling titi Monica, how her good luck bra gets her out of tickets and sometimes free bagels. I hear them when they think I’m not paying attention. Imagine what it can do for me at school today.” Turning on her heels Lou, pounded down the stairs. She paused at the edge of the staircase and reached around to grab her backpack off the hallway table. Daniel, paused in Lou’s' bedroom doorway, expecting to hear a boisterous thunder come from his wife’s throat.
“Wait for your dad to walk you to the bus stop Lou, and don’t forget your backpack!” He waited. “Love you mom!” “I love you more, angel." When he heard Lou’s, feet meet the porch only then did he quietly head downstairs.

Ever Sanchez, was sitting at the kitchen table, intently reading over what she had just pounded out from her keyboard. Charlie, the dog was laying at her feet and Fatboy was now laying in the middle of the kitchen table, purring as Ever, stroked his back.
She took a long sip of her morning tea and looked up from her glasses at the tiptoeing figure approaching the open front door.

“Hey babe! she yelled, “I see you worked your magic and got Lou, out the door.”

“And I see,” Ever yelled with a grin, “that she’s wearing a cape, your tie, goggles and what appears to be my favorite bra on her head. Really, babe?”

Daniel, stood frozen in place on the front porch. He smiled to himself as he looked over his shoulder to his wife, who was now typing fast and grinning into the keyboard.
“I do hope you know that you're explaining your daughter and her uniform,” this she said with a motion of her fingers in the form of bunny ears, "to the bus driver, neighbors and basically anyone who asks.”
“Si, mi amore.” He said with a smile, and stepped off…

It’s the first day of school, and six-year old Louanna ‘Lou’ Sanchez doesn’t want to go. She can’t find her lucky yellow socks. Without their “superpowers,” she feels powerless. But with a little encouragement from her father, a glorious imagination and some eccentric fashion, she tackles the first day of school inappropriately and courageously.

By day’s end, Lou, learns an important lesson about herself, confidence and friendship. That with a little bit of self love and support, we can all be superheroes. Lucky yellow socks or, not

R. R. Graves-Higginbotham has been an avid storyteller for more than thirty years. Little Miss Inappropriate and the First Day of School is the first book in a long awaited series.