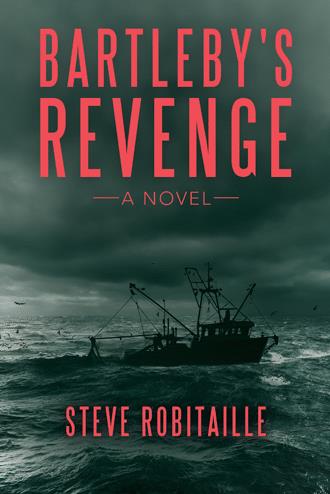 The spray from a cresting wave over the bow brought Jimmy back to consciousness. He closed his bleary eyes, stinging with salt water, not certain how long he had been out. He tried futilely to rub them dry with his soaked shirt. When he was able to focus, he realized he had abandoned his position at the wheel and was curled up next to Peter who was still sitting in shock on the deck. Jimmy looked down and saw that his own clothes were drenched in blood. The look on Peter’s face, angel or demon, he couldn’t quite tell. All he knew was that when their eyes met, he felt both profound sorrow and a sense of dread.
It was then that he looked over to where Mr. LeBlanc had been standing with the gaff and saw his body sprawled on the deck, the gaff point sunk deep into his chest, a hideous grin on the crescent-scarred face.
Jimmy fainted again.
The sun was setting and the storm was retreating to the southeast when Jimmy came back to consciousness. With his good hand, Peter applied a cold beer can wrapped in an oily cloth to Jimmy’s face. Peter’s injured hand was wrapped in his dad’s bloody shirt.
“You missed the worst of the storm. Really blew hard for a while, but I was able to keep her on a good heading.” Peter’s voice seemed weirdly calm. A crowd of emotions vied for Jimmy’s
attention. Peter sat there with a severed finger. They had nearly died at sea. Then it hit him. He struggled to stand up, though he was still clearly woozy. He circled the boat to where Mr. LeBlanc had been lying. He almost jumped out of his soggy shoes when Peter came up behind him and spoke.
“He’s gone. The sea took him.”
“What do you mean, the sea took him?” Jimmy couldn’t understand his friend.
“You really don’t remember what happened?” Peter asked again.
Jimmy tried to get back to that moment, as if he were trying to reconstruct a disturbing dream that held itself at bay, just beyond the periphery of morning memory.
“I dunno…I fainted.” He glanced down at the blood on his jeans and t-shirt.
“So you really don’t remember what happened? Peter asked again. Jimmy found Peter’s penetrating, quizzical look disturbing. “That’s right, you fainted. So if anyone asks, just say the sea took him, okay?” Jimmy could see Peter was visibly shaking, whether from fear or exposure to the dropping temperature and wet clothes. Peter slumped to the deck, seeking protection from the wind.
“Come here and let’s huddle,” Peter pleaded, reaching out to Jimmy with his one good hand. “I’m freezing and there isn’t a stitch of dry clothes or warm cover on the whole dam boat!”
Jimmy sat next to his wounded buddy, putting his arm around him, tenderly, though at first somewhat tentatively. The seas had calmed, and without fuel, the boat was adrift. The boys were close enough now that they could smell the salt and perspiration on their shivering bodies.
They watched the last rays of sunset to the west and seemed content to be alone, together, at sea. In the warmth of their mutual embrace, the trembling slowly subsided. It was still too light to see the stars, but on the far horizon Peter thought he saw a single red light.

Childhood friends Jimmy Lemond and Peter LeBlanc grow into adulthood during the tumultuous days of the Vietnam War. Like Herman Melville’s character, Bartleby, they both “prefer not to” take up arms, but they still can’t avoid turmoil.

Jimmy is a student journalist who soon finds himself on the front lines of protests, where his fellow students not only demand an end to war but also the end of racism and segregation in their college community. Peter is still haunted by his father’s death on an ill-fated fishing trip. He joins the Mennonites in Vietnam as a peace worker. Through his relationship with a Thai woman he is introduced to the Mother Goddess ceremony and finds spiritual confirmation of his gender transformation.

What an intriguing and unexpected tale Robitaille gives us. Bartleby’s Revenge kept me turning pages. The novel engages themes I care about a great deal, specifically those of peacemaking in response to war and of personality development through all the vicissitudes of social forces swirling around us. The story brought home for me in a renewed way the impact of the American War in Vietnam on individuals and families here in the US, particularly those with children facing the draft. For me as a Mennonite peacemaker, the draft was a welcome thing that midwifed me from a sheltered life here to years of peace work in Vietnam during the war, a path similar to that of one of the protagonist’s in the novel.
—Earl Martin, author of Reaching the Other Side (1978),
memoir of Mennonite peace work service in Vietnam

I loved it. The pairing of Peter and Jimmy is a beautiful framework; their divergence and reunion are really engaging. They achieve a reconciliation without sentimentality, predictability, or compromise of their richly developed characters.
—William C. Lineaweaver, MD, Editor in Chief,
Annals of Plastic Surgery

… That a son of New Bedford imagines his life and the biography of his generation through the lens of Melville’s Bartleby is a moving exemplar of a mystory, testing in novel form Nietzsche’s insight, that life is the iron hand of necessity shaking the dice box of chance.
—Gregory Ulmer, Professor of English, University of Florida
and author of Teletheory and Internet Invention