For the World to Receive the Restored Gospel of Our Savior, Jesus Christ, in these Latter-days

by Barry A. Baker 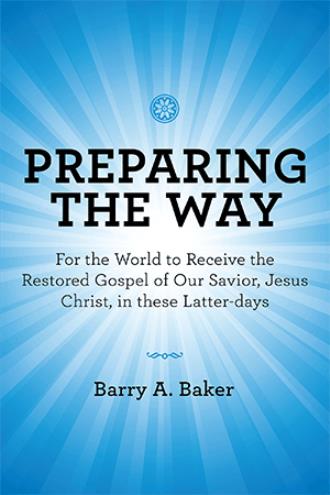 As we all know in today's society, it is common practice for celebrities, dignitaries and special guests to receive a proper and formal introduction to their constituents or audience. In the world of entertainment, politics or special gatherings, it is the show of respect and honor for the guest or authority to have a formal and proper introduction. Jesus himself said of John the Baptist:
"But what went ye out for to see? A prophet? Yea,
I say unto you, and much more than a prophet. This is
he of whom it is written, Behold, I send my messenger
before thy face, which shall prepare thy way before thee.
For I say unto you, among those that are born of women
there is not a greater prophet than John the Baptist…."
(Luke 7:26-28)
"On the other hand, what did John the Baptist say of
Jesus? " . . . I indeed baptize you with water; but one
mightier than I cometh, the latchet of whose shoes I am
not worthy to unloose: he shall baptize you with the Holy
Ghost and with fire." (Ibid 3:16)
The love and respect Jesus and John the Baptist had for each other was definitely demonstrated by both when separately declaring the word, as well as when they were together as witnesses of each other's mission and as relatives. As it is assumed, they had some knowledge of each other, even though nothing is recorded in the Bible of a close relationship in their younger years. The trust and understanding of each other's mission were unquestionable. Even though John's popularity was evident to Jesus, He never gave His audiences any hint of anything but love and respect for John's mission and the truth of his marvelous message, how could he?
RESTORER
The title Restorer can be attached to one person or a group of persons. The first name that comes to the minds of latter-day scholars of the restoration is that of Joseph Smith Jr., the Prophet of the Latter-day Restoration. His mission was instrumental in being the one through whom the "Dispensation of the Fullness of Times" (Eph. 1:10) was ushered into our present-day world, an example of the title Restorer. The Latter-day Saint scholar understands the story, the process the Lord used in restoring His divine authority and earthly kingdom through the young man, Joseph Smith Jr. and his associates. When one comes to understand that divine authority, not man-assumed, was absolutely essential to the re-instituting of the organization of the original gospel of Jesus Christ in these latter-days, only then will he even begin to fully appreciate what a wonderfully ordered turn of events had to take place for that to happen. Joseph Smith Jr. and his group of witnesses experienced the ushering in of the promised restoration of the gospel of Jesus Christ in its pure form in these latter-days. He was divinely commissioned and directed by Deity.
Today is the day spoken of that was prophesied years ago for the long-anticipated restoration of the gospel in its fullness. It was a prophecy to be fulfilled in the latter-days. (The story of the restoration of the gospel in its fullness, the same church, with the same authority and organization that Jesus himself established in the "Meridian of Time" will be told more fully in chapter eight.)
Repent ye therefore, and be converted, that your sins
may be blotted out, when the times of refreshing shall
come from the presence of the Lord;
And He shall send Jesus Christ which before was
preached unto you:
Whom the heavens must receive until the times of
restitution of all things, which God hath spoken by the
mouth of all his holy prophets since the world began.
(Acts 3:19-21)
The New Testament Elias is the Name for the Old Testament Prophet, Elijah.
As is common in reading the New Testament one will find it not unusual to learn of some Old Testament names bearing their New Testament translation. (e.g. Jeremy/Jeremiah, Jeremias, Matt. 16:14, 27:9; Paul/Saul, the original Jewish [Hebrew] name of the apostle Paul; as he is so called, up to Acts 13:9., B.D. p.769) It is almost as if the same practice is used today in some of the common names we all hear in our own families and friends, even though not variations from different, but the same English language. Instead of making reference to them as Old Testament (Hebrew) or New Testament (Greek) forms, we call them formal or informal, or sometimes nicknames. The formal name is always entered or registered on official records, e.g., legal documents of city, county, state and national records, as well as the usual church/congregational records.
What about Elias Spoken of in the Old Testament?
According to the Holy Bible and the book of Doctrine and Covenants there was an Old Testament person named Elias, who lived in the days of Abraham. In answer to prayer he appeared in the Kirtland Temple to the Prophet Joseph Smith and Oliver Cowdrey on April 3, 1836 and committed the keys of the gospel of Abraham to them. So, the first question that comes to mind is what was the gospel of Abraham?
Now what was the gospel of Abraham? Obviously,
it was the commission, the mission, the endowment
and power, the message of salvation, given to Abraham.
And what was this? It was a divine promise that both in
the world and out of the world his seed should continue
"as innumerable as the stars; or, if ye were to count the
sand upon the seashore ye could not number them."
After this, Elias appeared, and committed the dispensation of the gospel of Abraham, saying that in us and our seed all generations after us should be blessed.
Therefore, the keys of this dispensation are committed into your hands; and by this ye may know that the great and dreadful day of the Lord is near, even at the doors. (LDS Reference Encyclopedia, Vol. II.p.87)

“From small and simple to grand and glorious” sends an immediate message to many readers, but to those who do not instantly envision examples before them, Preparing the Way seeks to reveal elements of past, present, and future events, woven together to set the stage for the great and dreadful day of the Lord. This paradigm stage is set for all to discover.

One of the clearest principles of world history is that everything we see before us today had a small beginning somewhere, somehow, influenced by someone. Remarkably enough, these events have prepared the way for the restoration of the church that Jesus Himself organized in His day and age. Through miraculous occurrences, His church is again upon the earth to prepare the way for His second coming to preside over His kingdom for the one-thousand-year millennial rule and reign—Jesus as King of kings and Lord of lords.

Thoroughly researched and supported, this study invites you to embrace the knowledge that the same church that Jesus organized in the ancient Holy Land has been restored to the earth.

Barry A. Baker is an experienced educator, full-time missionary, and church and public servant. In August 1963 he married Tamra Hyde in the Salt Lake Temple.
Barry graduated from high school in Beaver, Utah, in 1956. He received his BS degree in speech and English from Utah State University in 1966 and his MEd in Ed. Admin. at Brigham Young University in 1970. Before being transferred by the Church Educational System to Minnesota, he taught seminary in Utah, at the Coalville and Kamas LDS Seminaries. While doing his graduate studies at BYU, additionally, he taught one year at the Lehi LDS Seminary.
In 1970 he was transferred to St. Cloud, Minnesota, where he taught and coordinated home study and early morning seminaries and institutes in portions of Minnesota, Wisconsin, North Dakota, as well as in Manitoba and Ontario, Canada.
He was transferred back to Utah in 1983 to teach at the Ephraim LDS Institute of Religion. In 1990 he was assigned to teach as the LDS Institute Instructor/Coordinator at the opening of the new state prison, the CUCF, (Central Utah Correctional Facility) in Gunnison, Utah, teaching afternoon classes after teaching morning institute classes in Ephraim. His Ephraim Institute specialty was in teaching Religion 130, Missionary Preparation.
Barry and Tamra have served three full-time missions for the church. They were the first Latter-day Saint full-time missionaries to serve in the country of Kazakhstan (2002–03); followed by a second humanitarian mission, this time to the people in the Russia Vladivostok Mission in 2006–08; then an LMS (Leadership-Member-Support) mission in the Florida Jacksonville Mission in 2011–2013.
An interesting and unique part of Barry’s leadership experience is that he has served as branch president four times, two of those at both ends of the globe, in New Zealand and Russia. He has also served as bishop, high councilor, district presidency, teaching and administrative positions in the church as well as Ephraim City Council member.
Last, but certainly not least in his life’s experiences, Barry served our country for six years in the Utah Army National Guard, with an honorable discharge in 1967 as a staff sergeant.