The Triumph of Capitalism

Why God Wants Socialism and the Fed to End 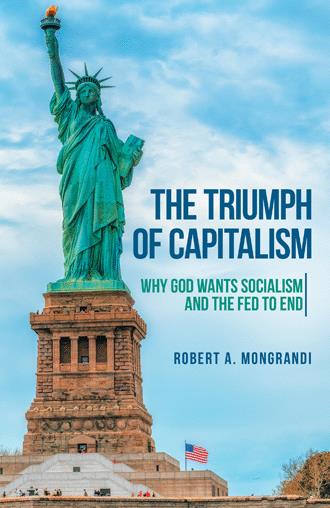 Benjamin Franklin in his diary said:

Benjamin Franklin in his diary said;
"The colonies would gladly have born the little tax on tea and other matters had it not been that England took away from the colonies their money, which created unemployment and dissatisfaction. The inability of the Colonists to get power to issue their own money permanently out of the hands of George III and the international bankers was the prime reason for the American Revolutionary War”. (how come this is not in history books?) pg. 31

We all want abundance and the wherewithal to buy life’s necessities and luxuries. But socialism and the Federal Reserve can take those things away from us.

You might be surprised to know that the Federal Reserve is not a government agency. It was created to end banking crises—also known as panics.

Robert A. Mongrandi examines the history of the Federal Reserve, socialism, and communism in this book, explaining how he overcame the misguided notion that a one-world government would help humanity.

He argues that Federal Reserve policies affect us all, and that its creation in 1913 was illegal. Most of us do not understand how the Federal Reserve controls the economy of the nation.

Mongrandi also shares why tithing is the number one key to prosperity, Karl Marx’s ten planks to seize power and destroy freedom, that socialism has destroyed the lives of tens of millions of people.

Take a trip through history and gain a better understanding of the world we live in with the insights and historical lessons in The Triumph of Capitalism.

Robert A. Mongrandi is a blue-collar worker who became interested in politics in his late twenties. While he once believed in a one-world government, he has come to appreciate that the United States of America holds a special place in the world as a result of its Constitution. While it has problems, he believes they’d be multiplied if we embraced socialist ideals.