The Perils of Isabella the Great Dane (Bilingual Edition) 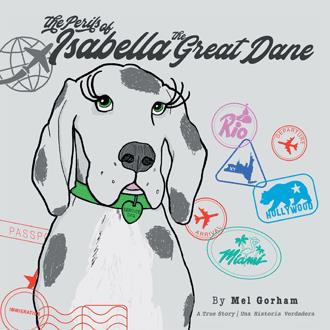 "The Perils of Isabella the Great Dane" is published under Archway Publishing from Simon & Schuster operated by Author Solutions, LLC.

On this Earth we have a choice to be respectful to animals, or not. This is a story about me and my kind human family. It's been a charmed life, but that doesn't mean it's been easy. It has certainly been an adventure, one that I would like to share with you. I'm a proud member of the animal kingdom and with this book, hope to open the minds and hearts of all the children around the world- educating them in the humane treatment of all animals on this Earth.

Actress Mel Gorham is truly a work in progress.

A well seasoned veteran actress of the stage and screen as well as on television. She was born in Miami Florida from a Cuban Catholic Mother and an American Jewish Father.

At the age of four she started playing classical piano, then went seriously into dance, then stepped on a stage in a play at the ripe age of 12. She knew then what her life would be - an actress, with comedy being her forte'.

After attending the University of Miami drama dept. for 4 years and earning herself a bachelor of fine arts degree in drama, she packed it up and left for NYC at 21. Only to find that 2 weeks later she would be On Broadway and endure a lifelong career loving what she does, making people laugh, yet, her dramatic side was and still is as powerful as her comedic one.

Mel has starred in many plays and musicals in New York (On Broadway and Off) therefore, the theater is her backbone.

She has earned her own TV sitcom on NBC entitled Union Square. She was given a five picture deal with Harvey Weinstein at Miramax and starred as well as co-starred in Smoke, Blue in the Face, Curdled, Wishful Thinking & Copland. She has also worked with Directors Brian Depalma, Penny Marshall, Spike Lee, Wayne Wang and Paul Auster including partnering up on NBC with her sitcom director James Burrows.

Mel has graced the Broadway stage in the revival of Gerome Ragni and James Rado "Hair", Marvin Hamlisch's "Smile", and Kenneth Tynan "Oh Calcutta". Most recently, She has played her greatest Hollywood role in a dark comedy film, The Rainbow Bridge Motel to be released in 2017, there is a Hollywood Buzz that her performance is worthy of an Oscar Nomination.

Miss Gorham has also founded and created an organization to help women learn to love themselves as well as each other entitled: The Black Hat Society Private Ladies Club, having started with 7 ladies and today they are 20 members strong helping those in need. This powerful fun club of women just recently celebrated their third year anniversary together on Miami Beach all dressed in white; having white cake, drinking champagne and bringing in the presence of their husbands and boyfriends. Having so much to celebrate, they drastically have changed the lives of 3 women who were in dire need of help, love and support. They are here to empower one another, and help those not as fortunate.

Her newest project is a documentary film based on the private ladies club she founded in 2015.

The film, The Black Hat Society Private Ladies Club documentary was shot for a total of 12 meetings in one year.

Each location being totally different from the other... ending with the 3rd anniversary beach event with the husbands.

It is a true insight of what a women's club is actually like. The inner growths that you see happening throughout the year to all the members who participated in this film is evident….the pros and cons of starting a private club, because of never really finding a place she fit in, so she created her own place to hang her hat and it took off. The story clearly shows the many personalities that come and go... and those who stay for the longevity.

It's about giving and taking.

This film will be unique for its rawness and for the way it was shot. Testimonies, disagreements, brutal honesty heartbreaking stories and learning how to cope to love other women regardless of any personal feelings because at the end of the day, the club is the club.

Either stay or leave…either be a part, or not.

The Black Hat Society is a safe place to be.

Indeed, Mel is truly a work in progress.

Visit Mel Gorham's website www.melgorham.com to know more about her life as an actress.