From William James to Milton Erickson

The Care of Human Consciousness 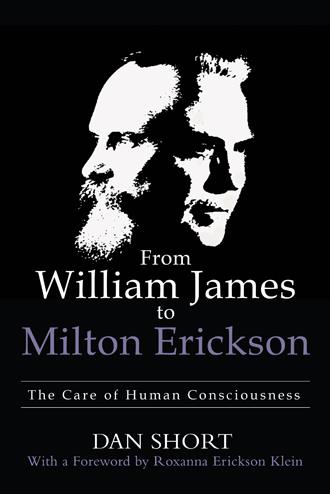 As an example of this metaphorical approach, Erickson described a patient who, in 1959, entered the office and said, “I can’t talk.” Already desperate to leave, she asked, “Can I write it out next time I come here?”

Erickson replied, “Yes, but could you tell me some of the things by name that you might write about?”

In response, she tightened up her mouth and shook her head.

Erickson asked her if she could talk.

Again, she shook her head. She had suddenly lost the ability to speak.

So Erickson asked her if she could write for him.

Again, she shook her head. She was a schoolteacher, and now she had also lost the ability to write.

After having suggested that she could hold a pencil, Erickson swiftly handed her a pencil, but he asked her to hold it in her left hand.

With a confused look, she took the pencil with her left hand.

Erickson said, “Of course, you are right-handed; but after you’ve held it in your left hand, I want you to hold it in your writing hand.” Giving her some time to consider this, Erickson continued, “You really can’t write yet, can you? Not until you get home. I wonder how you feel about not being able to write here, now in the office? Do you think you’ll be glad to be able to write at home for me?”

After hearing this, the woman began speaking. According to Erickson, she had a great deal of highly emotional material to discuss. She wanted to know if he thought she was schizophrenic. What was her prognosis? Did Erickson think she hated her husband? Did he think she wanted a divorce? And, was she afraid to face her own thinking? (Erickson and Haley 1985, 205–6).

Had he encountered such a patient, Freud would likely have proposed that with this type of material, connected with so much painful emotion, the technique of free association was necessary to bring it out into conscious awareness. Although hypnosis might have achieved similar results, Freud considered his method of free association to be much safer and less controlling.

The only problem was that this woman could not speak or write. The associative uncovering would have to be conducted in a way that matched the woman’s sense of ability. In contrast, Erickson recognized that he merely had to ask her to hold a pencil in her left hand and then let her decide when she was ready to move it to her writing hand.

If the chain of cause and effect is not immediately obvious, do not worry. None of the people who were listening to Erickson could understand the results either. When asked by Jay Haley to explain this amazing and rapid breakthrough, Erickson again described how he asked her to communicate but to do so in the wrong way—she was holding her pencil in the wrong hand. Though still mystified by the outcome, the group ended the discussion there.

Because Erickson’s explanation does not fully clarify the meaning of these events, it is helpful to recall Jamesean principles of consciousness. If we consider the transitive quality of consciousness, we know that things that are not identical can still feel like they are the same. So holding a pencil feels like communicating; it is an analogous-feeling stimulus. Holding this object in the “wrong” hand would feel uncomfortable, which she would subconsciously wish to correct. In other words, by placing the pencil first in the wrong hand, Erickson has substituted his own temporary block on communication in place of her involuntary block on communication. Paradoxically, rather than pressuring her to produce communication, Erickson frustrates her desire to communicate by placing the pencil in the wrong hand. For a schoolteacher, this would trigger a desire to correct the situation at deep subconscious levels.

Erickson further frustrates her desire to communicate by asking her how she feels about not being able to write in his office. Of course, she does not like it; it feels wrong. Then he starts talking about her having to wait until she gets home before she can write something. So there she sits with pencil in hand, the wrong hand, and now he is implying that she cannot do any writing until she returns home. This situation is analogous to placing a plate of food in front of someone and then pulling it away. It triggers a strong desire to grab hold of the lost opportunity.

Erickson also suggests that she can soon move the pencil to her writing hand after holding it in the left hand. This is both an indirect suggestion to communicate by writing and a highly symbolic way of suggesting that her block on communication will soon be resolved. Given her urgent need to communicate, the woman chose the simplest method of communication, which was to speak.

This is a book about how William James and Milton Erickson have helped shape the modern conceptualization of human consciousness and its care. With both men cast from the archetypal mold of a wounded healer and a coming-of-age odyssey, it should not surprise us that James and Erickson converge on the central idea that “…the secret to the care of human consciousness is the utilization of who we are toward some practical end.” It does not matter if you are a serious student of James and Erickson or someone who is freshly introduced to their work; this book offers clarity and a deeper understanding of what Jamesean psychology looks like when masterfully applied to clinical care. While numerous books have been written about Erickson, they often revolve around spectacular success stories—making Erickson somewhat of a myth and therefore inaccessible. By learning more about the stories and principles that informed young Erickson, we are better able to appreciate and learn from the common sense nature of his work.

Dan Short, Ph.D., is a practicing clinical psychologist who teaches classes on medical hypnosis at the Southwest College of Naturopathic College of Medicine. He is known for collaborating with two of Milton H. Erickson’s daughters, Roxanna Erickson-Klein and Betty Alice Erickson, in writing Hope & Resiliency: The Psychotherapeutic Strategies of Milton H. Erickson M.D. In that classic text, he summarizes his learning from a two year-period as the chief archivist for the Milton H. Erickson Foundation. He lives with his wife and two children in Scottsdale, Arizona.