in an Old Electric Vehicle 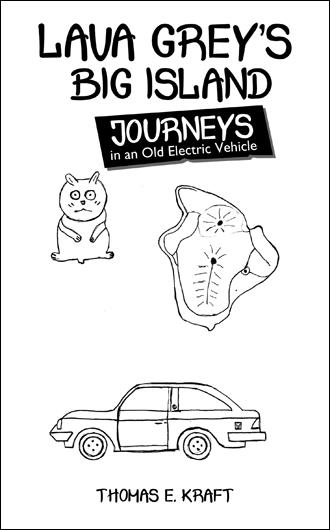 Driver: Looks like your crew compartment could use some help from Marie Kondo, some tidying up.

Driver: After that, start scanning for South Point.

Lava Grey: Talley ho, Southern most point in the U.S.A. in sight.

Driver: Hitchhiker up ahead.

Lava Grey: I will check it out.

Lava Grey: Could it be? … I’ve heard about him -- not the prophet, not the forecaster, not the prognosticator, but “the Oracle of Kau.” This should be interesting.

The car stops and the cat hops in.

They stop for a moment, then on their way minus a cat.

Lava Grey: Is he out? Is he gone? Departed? Debarked? Disembarked?

Driver: Out and on his way to sample some Kau coffee at the roadside stand.

Lava Grey: (Yells to departing passenger.) Too much internet? … (Under her breath.) Whew -- glad that’s over.

Driver: So what was that all about?

Lava Grey: First, the Kennedy assassination, they were all involved: the CIA, the Mafia, LBJ, Fidel, the KGB, the Federal Reserve, even the Isreali Government. He managed to bring them all into that fateful day in Dallas.

Driver: What did you say?

Lava Grey: As soon as I said that he started on the moon landing hoax. Can you believe that? He says it was faked!

Driver: So what did you say?

Lava Grey: Well, I had more to say … twelve names.

Lava Grey: I couldn’t say anymore, I was flabbergast. But, but, I wanted to say “yeah … George Harrison you dumb ass!”

Lava Grey: That wasn’t all, last but not least the apocalypse, armageddon, a holocaust is on it’s way in just two months.

Lava Grey: He even knows the exact date. But he said it could slip … a bit. Can we talk about something else?

Driver: Sure, we are almost to the dump. We can stop and get rid of the trash and recycle.

Lava Grey: I want to go outside and get the fumes, smoke and volatile substances out of my head!

A quick interlude is made at the dump.

Lava Grey: Is our launch from the dump going to be as exciting as the launch from Ocean View?

Driver: We are on our way to the Punalu’u Bakery.

Lava Grey is an inquisitive talking cat on Hawaii’s Big Island. She gets her name from the abundant rocks and boulders on the island. For nine years, she has lived on a three-acre plot with her caretakers, Auntie Melsy and Major Tom, but she has decided she needs to see more of the Big Island beyond her home.

She and Major Tom set off on an adventure in a1981 Mercury Lynx, an old electric-powered car. Together, they venture away from their home. Along the way, Lava Grey deals with dog and cat hitchhikers, samples local pastries, and even meets an army of rats.

Adventures can sometimes be dangerous, as Lava Grey soon learns. She must come to terms with her fear of dogs and realize that opposing sides can come together with a common goal. Lava Grey has always been book smart, but she quickly becomes life smart with the help of Major Tom and their unique electric vehicle.

Thomas E. Kraft lives on Hawaii’s Big Island with Auntie Melsy and a talkative cat. He is an electric vehicle advocate who in prior lives dabbled in teaching and served in the Air Force.