Until Death Do Me and Words Part

(I live to write another day.) 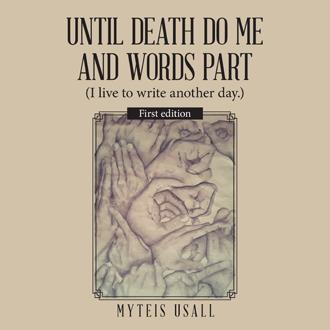 The essence of belief is to be achieved beyond heart and mind which faith states can’t be seen. We undergo our interests with obstacles and problems inevitably unmentioned in the steps of productivity, but we still believe in success, while so many others accept the first disappointment and fall short of trying again. Bettering one’s self in the act of works and determination proves belief embodied. So how much further is faith to be manifested, replacing frustration and disappointments? Or is faith just an adopted emotion to help ease the failing blow when believing in others or in one’s self becomes unbelievable? Whatever the effort, believers are supposed to move in an onward focusing in the right direction. Hard work ensures one’s success to be effective, even though sometimes ideas are abandoned adjustments that can be made to make a good idea work more efficiently in time rendering nothing impossible. There are those who believe in faith. Others believe in fate or that one is essentially in control of their own destinies, but learning the meaning of belief is learning to believe in that which cannot be seen as faith proclaims. Faith is the substance, hope was the bridge, while belief was the essence waiting on the other end. Two parents wanted a child even after being told that they weren’t able to. Their evidence was the body that they conceived two years later, drawn from belief in the impossible in hope for a miracle. Faith over facts makes fate empirical when impossible has become possible. Was it belief, hope, or faith to make a miracle evident and logical from unthought of and unseen to now manifested into a living and breathing baby brought forth by the same doctors who said it couldn’t be done? So now who has faith and who now says they have belief? In everyday life and through everyday moves, manifested belief is produced, so is it really still impossible to see that the substance of faith is in you? Or what does belief really mean to you? I hope to see your evidence.

My umbrella that cloaks me from the rain.
My flower that never dies.
My breeze that’s never shy.
Love you always just but, blow me away.
What is this?

Life is full of love and hate; good and bad. Through all our experiences, struggles, joys, and heartache, we eventually realize that life is not comprised of just our story, but instead the stories of everyone around us as well.

While reflecting on his views and personal experiences, Myteis Usall shares a collection of moving free verse that explores a variety of topics and emotions that address the seasons of life, the never-ending struggles of the working who love life, the ups and downs of love gained and lost, the influence of nature on our journeys forward, and the blessings of family, faith, and the cycle of life.

Until Death Do Me and Words Part is a volume of poems that explores one man’s back seat view as he travels around many different life experiences and learns that life is full of valuable and invaluable lessons that he deemed worth sharing.

His name details a message all on it’s own. He’s no novelist or book scholar. He was born and raised in the great hoosier state of Indiana. He joined the military right out of high school, learned a trade and now makes a decent living with a career he can appreciate. He’s just a regular guy that wanted to share his journal with you and show others around the world that if the words are inside you to just let them out because you never know who you might help with your words.