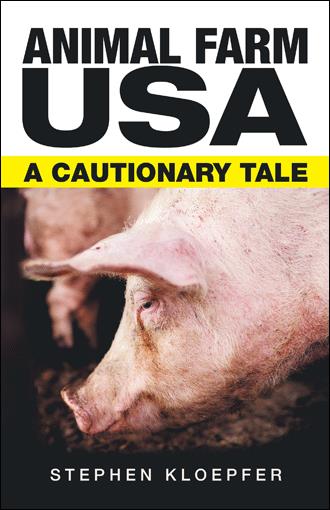 From the day he was born, in a private heated nursery at Animal Farm USA, Big Pig was destined to be an exceptional pig. Although many newborn piglets are confused and disoriented and need to be guided to their mothers’ teats, not Big Pig. From his first waking moments, he expertly homed in on them and was also unusual in making determined efforts to suckle not at just one or two of his mother’s teats but at all of them and in no particular order–even if that meant pushing and nosing aside some of his newborn siblings who were also trying to suckle for nourishment. Big Pig was even known to suckle at the teats of other nursing sows when the occasion presented itself (variety being the spice of life and, as he would often joke with his male pigster friends, “Any teat in a storm, right?”)

All of the other weaners at Animal Farm, including his pig siblings, quickly outgrew the heat lamps that were used to keep them warm during their infancy. Big Pig, however, continued to use a heat lamp into adulthood. When asked to explain this unusual practice, his answer was simple and unapologetic: he liked, and was given to understand that the many ladies of his acquaintance also liked, the urbane, tanned look it bestowed on his thick pink skin (except around his eyes, which he sensibly protected by wearing tanning goggles.) And while most male pigs at the farm gave no thought to the bristles on their snout and face, Big Pig had always taken care from an early age to make sure that his bristles were expertly trimmed, sprayed, and neatly combed.

Big Pig was born with exceptionally strong legs; his mother had told him that he had practically walked out of her womb and then started running in circles around her and skipping about on his hooves as she was giving birth to his seven siblings. That Big Pig’s legs were unusually thick and strong was a blessing, for they were destined to support a huge bulk: at two years’ old, Big Pig weighed almost seven hundred pounds. It was this impressive bulk which, prior to the start of his adult career in the family’s real estate business, had earned him the show name, Colossal Boar. And having acquired, early in his childhood, a passion for the amusements of the golf course, Big Pig’s portly frame also enabled him, while standing confidently on his stout hind legs, to hit long tee shots with a custom-designed driver he held between the knuckles of his trotter.

Everyone had heard of Big Pig. By his own admission, he was the smartest and most famous pig he knew and, not coincidentally, the most skilled self-promoter. More than any other prominent pig or other animal in the United States or abroad, Big Pig had learned to exploit the power of social media to spark controversy and keep his name before the public. His iconic Twitter handle, @realBigPig, was instantly recognizable and his incessant tweets–“liked” or not–were followed, and often retweeted and commented upon, by millions.

Big Pig’s father, a shrewd Large White boar who had made pioneering inroads into the worlds of both animal and human commercial and residential real estate, had given him his start in the family business and Big Pig had shown a real flair for it. When his father passed away, Big Pig changed the name of the family firm to Big Pig Enterprises, Inc.; rebranded the many buildings and golf courses he owned, and branded some new ones still under construction, with names like The Big Pig Power Tower in midtown Manhattan, Place du Big Pig in Paris, The Royal Pig Big Albion at Canary Wharf in London, and The Big Pig Swing Away Golf & Country Club in Westchester County, New York; and also branched out into the manufacture and marketing of custom-made luxury accessories that catered to wealthy pigs at Animal Farm USA and at the other animal-led communities in Canada, Mexico, the United Kingdom, Ireland, France, Germany, and Tibet, and also to the fabulously wealthy pig and bear oligarchs in Russia and China who lived like modern-day Romanovs and Medicis.

In only a few years, Big Pig Enterprises was a force to be reckoned with in high-end commercial and residential real estate (including luxury resorts and specially-designed par-three golf courses for “creatures of means”) and held a virtual monopoly in the luxury market for gold troughs, gold wallows, gold toilets, gold bidets, gold sinks, gold utensils, gold plate, gold goblets, and other gold home accessories for wealthy swine in North America and elsewhere.

In morals, Big Pig was something between a carnival barker and a used-car salesman. Veracity, empathy, self-respect, and modesty were not qualities required from him by the world. He had the vices, but none of the compensating virtues, common among men set from birth to occupy high places and long accustomed to being coddled, flattered, and obeyed in all things. As the unquestioned leader of his own sprawling business empire, he had a strong affinity for other authoritarian leaders whose word was law, whether in business or in politics. Big Pig embraced the authoritarian’s worldview that, from time immemorial, governments have been filled with the most corrupt humans and animals; that high political office was fruitful of hypocrites; that high-sounding rhetoric from the ruling classes about working tirelessly “for the good of the people” was merely a smokescreen behind which they could more readily line their own pockets; and that, if the ruling classes could get away with lucrative hypocrisy and hokum of that sort, decade after decade, it was only fair that others be given a chance to slurp at the government trough too.

A noble experiment in animal self-rule has ended badly. After the animals rebelled and overthrew the owner of a small farm in England, the pigs seized all power at the farm and terrorized the other animals more harshly than their human owner ever had. Snowball, the brave Gloucester boar who helped plan and execute the Rebellion, escapes assassination and plots a counter-rebellion that will rekindle the dream of a farm run solely for the benefit of the animals–and where no pig or human will rule over them.

Snowball has a big job ahead of him. Not only must he enlist his animal comrades to join the counter-rebellion; he must also negotiate with human leaders to establish animal-led communities in the United States and elsewhere. After many years of hard-won progress, the citizens of Animal Farm USA elect their first pig president and history repeats itself, both as tragedy and farce. The citizens of Animal Farm USA learn hard lessons about how even a mature democracy can be subverted by malign forces from within and without.

Stephen Kloepfer is a New York lawyer. After studying mathematics and law in Canada, he attended Northwestern University and Columbia University and then practiced law for twelve years at two international law firms. Since leaving private practice, Kloepfer has held executive positions with nonprofit and for-profit organizations headquartered in New York City. This is his second novel.