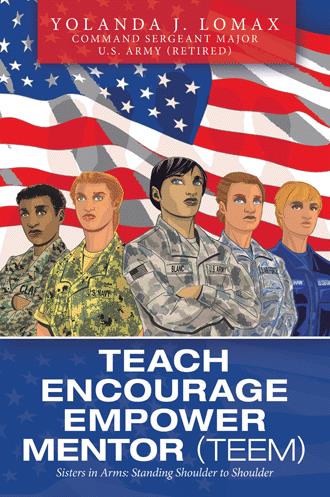 I would be the first to say, “I didn’t always get it right.” Were there moments of doubt, fear, and lack of confidence? Yes. Were there times I sang the cadence, “I don’t know why I left?” Yes. Were there times in which I regretted a particular decision, and wished I could have a “do over?” Yes. If those moments never existed, my career would not have been as educational and rewarding.

Although author Yolanda J. Lomax had a successful thirty-two-year-career in the US Army, she longed for the mentorship of her sisters in arms who wore the ranks of sergeant through command sergeants major or lieutenant through general. She yearned for the opportunity to seek their professional advice, as well as have a sister to go to, just to share a personal moment. Lomax realized that as she rose through the ranks as a woman, it was lonely at the top.

In Teach Encourage Empower Mentor (TEEM), she proposes a military female mentoring program to encourage sisters in arms to plant seeds, tend them as the roots take hold, emerge, and break through to reveal strong trees with branches. Lomax believes when women teach, encourage, empower, and mentor present and future military forces, it demonstrates that no weapon used against females can prosper.

Teach Encourage Empower Mentor (TEEM) delivers the message that when women can set aside trivial bickering and display unity, they are truly a force to be reckoned with. It demonstrates that average females are capable of achieving exceptional results.

Yolanda J. Lomax is a wife, mother, poet, praise dancer, retired command sergeants major, and sci-fi fanatic. She entered the US Army in 1979 as a reservist, transitioned to active duty in 1980, served thirty-two years in an array of stateside and overseas assignments, and earned a host of awards and decorations. Lomax and her husband, Davie, have two children. In her free time, she seeks any available opportunity to assist veterans.