Finding My Father through Letters from World War II 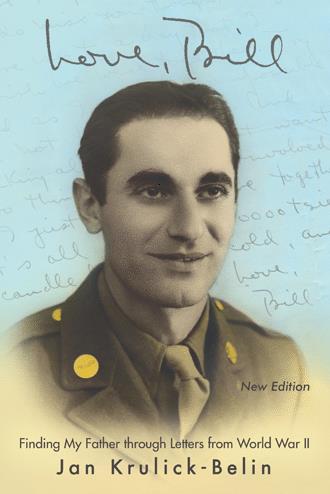 When they run alongside our two-wheelers for the very first time, they know when to hold on and when to let go. When they scare away the demons in our nightmares, it helps us to be unafraid to dream. Before we learn to stand on our own two feet, we must first learn to dance by standing on theirs. As little girls, we always think that we will marry our fathers; instead, they are here to walk us down the aisle and give us away to someone else. There is truly no other bond like the one between daddies and daughters.

Long before becoming a museum curator, author Jan Krulick-Belin curated memories, photographs, and mementos of her father who died when she was just six. Her mother rarely spoke about him again, until a year before her own death, when she gave Jan a box of one hundred love letters he had written her during World War II.

Love, Bill chronicles the true story of
Krulick-Belin’s life-changing pilgrimage
of the heart to find the father she thought she’d lost forever. The letters lead her on an extraordinary journey following her father’s actual footsteps
during the war years, leading to
unexpected discoveries from Morocco
to Paris to upstate New York. She learns about her parents’ great love story, about the war in North Africa, and about the fate of the Jews in
Morocco, Germany, and France.

Love, Bill offers a testament to the enduring power of determination, love, family, and the unbreakable bond between fathers and daughters.

Jan Krulick-Belin, a museum and art consultant and art and jewelry historian, has more than forty years of experience at such institutions as the Corcoran Gallery of Art, Denver Art Museum, Beaumont (Texas) Art Museum, and Smithsonian Institution. Retired as director of education at the Phoenix Art Museum, she still works with museums, art organizations, and private collectors and served as guest curator at the Sylvia Plotkin Judaica Museum, Phoenix. Visit her online at www.lovebillbook.com.