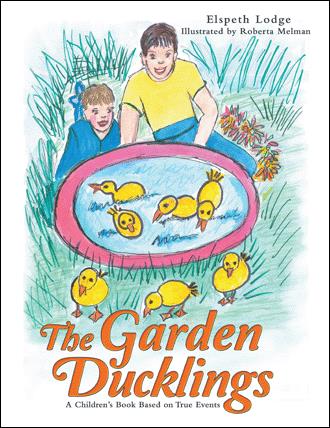 It was spring. The flowers were blooming, the sky was a crisp, clear blue and the sun was shining.

Mike agreed. He knew of lots of great hiding places in the thick-green shrubbery where his sister would never find him.

Mary covered her eyes with both hands. She squeezed all of her fingers tightly together, so that all she could see was darkness.

“Can you see anything?” asked Mike.

Mary shook her head from side to side. “No.”

“Over here!” shouted Mike, from a far corner of the garden.

“You aren’t supposed to tell me where you are,” said Mary. “That’s not the game!”

Mary marched into the shrubbery, pushing aside a few branches. She saw Mike sitting on the ground, looking at a pile of leaves and grass and feathers; it was a nest, and nestled inside it were seven smooth, white eggs.

In a story based on real life events, two young siblings learn about life and letting go after stumbling upon a nest full of abandoned duck eggs in their mother’s garden. Nurturing the eggs until they hatch, Mike and Mary have great adventures with the ducklings, but then are faced with the reality that they might be happier living in nature. The children’s mother and Mike’s school science teacher, Mr. Wisdom, help guide the children on their journey.

About the Author
Elspeth Lodge is a storyteller with experience in journalism both nationally and internationally, and in marketing and sales for special interest magazines such as Outdoor Life and Field & Stream. She holds a Master of Science in Journalism from Northwestern University’s Medill School of Journalism and a Bachelors of Arts in English from Wheaton College MA. This is her first Children’s book.

About the Illustrator
Roberta Melman is an artist who has been practicing her craft for almost 90 years. Her work has been shown in solo and juried exhibitions throughout the U.S. (predominantly in Philadelphia and Florida). She attended the Moore College of Art and the Pennsylvania Academy of Fine Arts in Philadelphia, and studied personally with Philadelphia artist Martin Jackson. Roberta is the author’s grandmother.