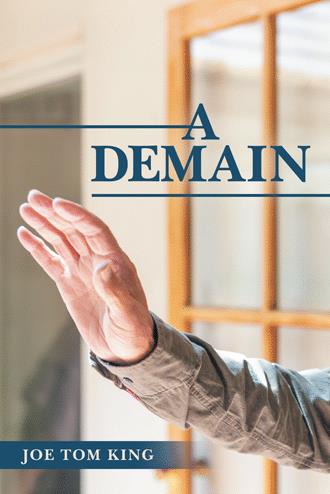 Maryellen led off down the path. Blackberry bushes guarded the left side of the trail for a while but gave up their watch to scrub oaks and pines for the rest of the hike. Some up, some down but the net direction was down until the trail mimicked the turns of the creek as if they were chasing each other. There was not much conversation, and it was only about the trail. Maryellen and Toliver took their time and soon they approached the swinging bridge. It looked like it was taken from a movie set. They crossed the bridge, and Toliver revealed the contents of his pack, to include a small blanket, bottle of wine and a tiny bluetooth speaker. Maryellen had the chicken salad sandwiches in a small fanny pack. They sat and listened to the water sounds from the creek as they created a contrapuntal mosaic with the peace and quiet that dressed them from top to bottom.

Toliver took the mic first and said, “Maryellen, I’ve been watching you from behind all the way here. You have a terrific tush and it preoccupied my attention for a good amount of the way. I actually tripped over roots a couple of times, but the prevalent condition that I observed today for you is a one-worder: Pensive. It’s like you participated in an act of sanctification but don’t know if you are fully consecrated. That might be a poor analogy but it’s the best I can come up with at the present. How about a glass of wine?”

Maryellen, accepted the wine and looked at Toliver as if he was a channeler. She would have to think about the analogy that he just used, but she grasped the gist of it… At the same time she made a decision to put her thoughts on the blanket. “Toliver, you and I have been together just a few times, but I am going to assert that we have a connection that is a shared kinship. Maybe at eighteen you don’t say these things but being sixty- five shortens your time horizons and causes you to push the envelope a little bit faster in order not to waste even one day of something good. I am placing a wager that you feel the same way. So here goes, and if at any time you want to get up and run to the car, please call Katie and tell her where I am. She will come and get me.”

Toliver dropped his head for a second as if he was going to pray, “Maryellen, I have participated in a very good life and was lucky enough to share it with someone who I loved with great intensity and was loved equally in return. I miss her every day but even more I miss the convection of energy, respect and honesty that we shared. I think that you and I share this remembrance of things past and revere their existence. We have come to realize that the existence of those thoughts creates a sorrow that cannot be put aside by oneself. I have known from the coffee shop that we were at least friends. And if I was lucky, I might get lucky… So, go on and make your bet.”

Maryellen was laying back with her hands behind her head, Toliver was sitting in that yoga position with your legs crossed, which was strange for a man of his size. Maryellen, without saying a word, sat up and sat the same way directly in front of Toliver. With their knees almost touching, she looked directly at him like a camera lens. “I remember Enos like it was yesterday. I remember all the little things,” like what his hands looked like, the black dot on his left arm from being stuck with a pencil by the preacher’s daughter in the sixth grade. The look on his face as he tried to get his tie straight in the morning. I also remember the big things and the unnatural kindness that permeated our song of life. We were an unmatched duet. You are right in your summation that those musings can push you into a dark corner of life’s big room. I’m rattling on when I should tell you what I intended.

“My best friend, Katie, recognized this long before I did. Her solution was to loan Jack to me as a retrieval device from sitting atop the cairn I carefully constructed each and every day. Long story short, Jack and I never consummated the Proposition. That is what we named it. It did let me discover that I could be a participant in the life of love and swim in the deep water of affection and endearment. I will spare you the minutiae of the Jack being Maryellen’s penultimate prom date. We realized that we were ill-used puppets, that were capable of cutting our strings. We walked away with a smile and both of us gained a friend for life.

“Unbeknownst to you,” she continued with gathering confidence. “You had a few lines in this drama. I described you to myself as a player who had the potential to be in the lineup for a long time. Sooooooo, do you want to go to one of our houses and see if a consommé of consummation could be a proper end to this picnic?”

Toliver unfolded his legs from what looked like an untenable position and said these words without a glimpse of humor, “Will you be gentle with me?” And followed that with a little laugh that underscored his statement as genuine.

The hike back to the car was slow, as if they wanted to give the coming event as big a buildup as possible. Who knows what they were thinking? But anyone who might have passed them on the trail should have known that both had something else on their mind besides not tripping on a tree root.

When they got in the car, the conversation broke out like the measles. Apparently both had been stowing thoughts, concerns and questions all the way up the trail. Tolliver went first. “Since we have adopted the cornerstones of our relationship to be honesty and openness -which, by the way I think it should be - you should know I have not done anything like this since Eve slipped away. I enjoy the way you talk about Enos and I hope I can do the same with Eve. There are parallels that could be used as ballast in a new relationship, or those same parallels could also be underlying currents of tension and distrust. I know I will always love Eve and I know you will always love Enos. I don’t look at either one of us taking their places. I have come to believe those loves can be deemed a delineation for us not to accept any less from others in any shape, form or fashion. I will shut up now as the next phrase would probably be described as babble.”

Maryellen looked at Toliver with a look of amusement and understanding. “Damn, I thought all this time you just wanted to get in my pants. You sly devil. You had me with that first cup of coffee in the rain. Sometimes a blessing arrives on your doorstep without warning. I think that we should consider our two person congregation to be a fermata… That is a note of unspecified length of time. Speaking of time, could you drive a little bit faster.”

A Demain is a book that should have a lot of appeal to a mature audience. It is a different approach to the common description of the senior years. The book uses characters who participate in a life that rises above the gray life that descends on people above sixty years on this earth. The characters have the common health issues, but their relationship with their doctor is not the most important relationship in their life. These characters seek to be part of a meaningful relationship with others, Sex is still an important segment of their wellbeing. Their language is one that is not faint; it is colorful and on point in all situations. A person reading this might say, “My friends don’t talk like that, but I wish they did.” This book would bring a smile to the majority of readers and they would recognize a lot of the happenings in the book. The growing importance of personal relationships as age increases is a keystone to this book.

Joe Tom King draws on long experience in the mature adult arena. His viewpoint comes at the reader from all directions. You will finish his book with a thirst for his novel voice and approach. If you liked ‘Our souls in the night’ and ‘Bridges of Madison County’. This book is similar in voice but with much more bite.