Tip of the Needle 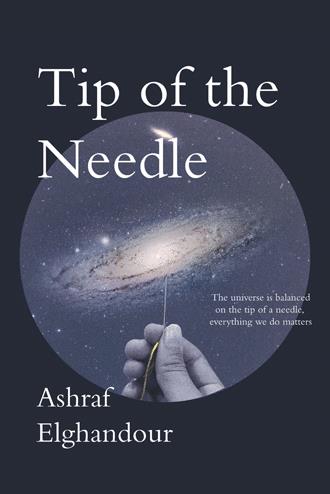 The confluence of politics, religion, and technology, tips the balance that has been delicately maintained thru our human existence. A Man insatiable appetite for power and control is left unchecked when technology becomes his enabler and are freewill is no more. The epic battle between good and evil is now armed with a new weapon that takes no prisoners and there’re no winners.

Nader and Addis, two exceptionally bright high school boys, live on opposite sides of the Israeli/Palestinian conflict in Israel. They’re brought together by the unlikely friendship between their fathers, a prominent Imam, and an influential Rabbi. As the idealistic religious leaders attempt a campaign to bring their people/followers closer, one is brutally assassinated. The course of each boys’ life is changed forever.

Ten years later, Nader and Addis are rising stars in their respective fields in the United States. Their paths cross again when they’re brought together by the love and ambition of Sacha Zimmerman, the whip smart daughter of wealthy tech giant Zack Zimmerman. As each grapples with their feelings for Sacha, they’re drawn into opposing sides of Zimmerman’s plan to change the world with his breakthrough biotechware technology. The worldwide release of this technology has the potential to eliminate many of the scourges on humanity but risks tipping the balance of power between good and evil.

In a world where technical advances are outpacing the ability to correct for unintended consequences and humanity becomes more willing to relinquish privacy and freewill for the promises offered by technological innovations, the universe is balanced on the tip of a needle. In a modern-day story of Adam and Eve and the lure of the proverbial apple called technology, Nader, Addis, and Sacha must each make decisions based on friendship, love, loyalty, and religion as Zimmerman’s plan has the potential to take him to the presidency and beyond.

Ashraf Elghandour was born in Cairo, Egypt, and immigrated to the United States at fourteen with his family. He earned an MBA and spent most of his career in the financial industry. Although he loved finance and being an entrepreneur, he has diverse interests in creative endeavors. Elghandour enjoys working with his hands and inventing unique equipment, especially in the health and fitness industry. He lives in Northern New Jersey and has two adult children.