The Journey of Grant Parker 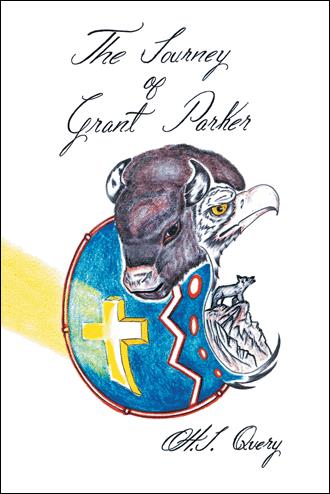 His blood suddenly ran cold as a huge grizzly loped over the top of the hill and headed straight toward Morning Dove! Grant knew at once that the bear was after the dead buffalo, and she just happened to be in the way. The smell of the animal's blood and entrails must have been overpowering to the hungry bear as he ran toward her.
Dove saw the look on Grant's face change from a loving smile to that of total horror, and watched as he frantically grabbed-up his bow. Realizing something was terribly wrong, she swung around to see the huge bear almost on top of her. She dropped her flower and froze where she was as the grizzly raised-up on his hind legs and snarled. He towered over her and knew she was no match for him, and was going to swat her aside, maybe eat her later.
Grant had an arrow pulled back all the way but couldn't shoot because Dove was directly in the way.
"Run, Dove, run!" he yelled, almost screamed.
In moments the beast grabbed her and Grant let his arrow fly, hoping to not hit Dove. The arrow grazed the bear on his sloping forehead, and he momentarily let Dove go as he looked at Grant and roared. Dove jumped away and ran down the hill getting behind Grant. He shot another arrow and watched it almost sink out of sight as it went through the beast's heart. He clawed at the arrow and roared with rage, and Grant shot again, the second arrow beside the first. As Grant notched a third arrow, the bear lumbered down the hill toward him and Morning Dove.
"Run back into the trees Dove. You'll be safer there!" Grant yelled, without looking to see if she was doing what he said.
He shot the arrow, hitting the animal's back and he raised-up again, snarling menacingly as he lumbered toward Grant. The razor sharp arrowheads were cutting the bear's insides with every movement he made, but they didn't seem to be slowing him down very much. Grant notched his last arrow and pulled it back all the way, ready to shoot when the right shot presented itself. He glanced around to see Morning Dove peeking around a tree that was in the grove of fir trees. The valley seemed to suddenly become deathly quiet as the bear and Grant stared at one another. They knew one of them was soon to die, and Grant figured it would probably be him if things didn't turn in his favor.

This historical novel is set between 1806 and 1810. Lewis and Clark have just returned from their famous expedition. School teacher, Grant Parker sets out on his own for a short trip to retrace part of the path that Lewis and Clark made. But what Grant thought would be a short trip turns into an action-filled adventure when he encounters many dangers along the way, including Indians, wolves, bears, kidnappers and possibly the most dangerous of all, love.

While this fiction book is filled with historic and scientific facts, the reader is drawn into the action right away and carried with Grant throughout his many adventures.

H. J. Query was born and raised in a small town in southern Idaho where he enjoyed hunting, fishing, and exploring the outdoors. He is a professional artist, painter, photographer, and wood carver who spent extended time with a Native American shaman learning the culture and practices. Today, he spends his days fishing, carving, writing, and bicycling in the beautiful Treasure Valley.