An Inspirational Salute to My Mother, Madeline Chinn Naas, 1929–2001 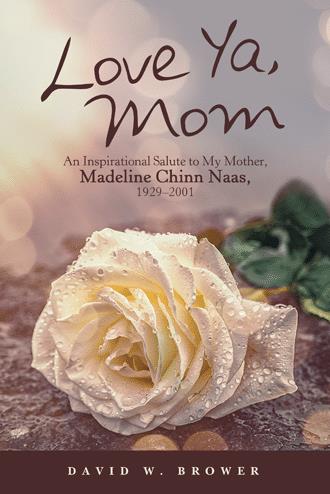 Cancer has no qualms about its next victim. When the “C” word decides to make a house call, it just does. Unannounced and uninvited.

Virtually everyone on my mother’s side of the family has died of cancer. At least that’s the way mom told it. “You’d better be careful, David, most everybody on my side of the family has died of some sort of cancer and most everybody on your Dad’s side died of heart disease. ”On top of that, both families have a history of death due to diabetes…and then there is having a stroke.

My mom and stepdad always spent a year playing bingo and hording their savings so that they could travel to Reno. The goal? My mom chain smoking and playing silver dollar slots. After many years of successful trips, the 1998 trip ended it all. Her last trip to Reno, with Cecil, she had what turned out to be a mild stroke. She had walked outside for some fresh air and collapsed on the sidewalk. Cecil rushed to her aid, someone called 911 and before you knew it the ambulance had delivered them both to Saint Mary’s Regional Medical Center. Jan Carnahan (RN, B.S.N.) was her more than capable case manager. After several hours of tests Cec called me. Fortunately, I lived in Chico, CA at the time, less than a 3-hour drive.

“David, your mom had a stroke and were here at Saint Mary’s can you come?” “Absolutely…see you in 3 hours!” Those 3 hours seemed like they took forever.

I got there in time to listen in on the details of what was happening. She had a TIA, Transient Ischemic Attack” often called a mini-stroke because if it is treated within 5 hours there is usually no permanent damage. But with that said, it is a huge warning as it may lead to a full-blown stroke later in life.

My mom was 69 and had been smoking since she was 8. Yes, 8! She would follow my grandpa around the ranch and as he tossed his ‘rolled’ cigarettes in the ditch she would pick them up, hide behind the barn, and finish them off.

The doctor told her “Madeline, if you don’t quit smoking, and I mean right now, you could very well have a full-blown stroke at any time and the chance of survival is not good.” So, mom at 69 years of age quit smoking, cold turkey. My stepfather also quit smoking, cold turkey, along with her. He was 77 and they had both chained smoke for so long that they had to repaint the inside of their home every year due to the effect the smoke had on the walls, not to mention furniture, lamps, you name it. Can you imagine quitting smoking cold turkey at ages 69 and 77? I sure couldn’t. I was 32 when I quit cold turkey, but I came to realize that their pact to quit is an example of true love that you just never hear of.

A few years prior to the stroke, leukemia entered my mom’s life. Her doctor would tell her, in an effort to ease her mind a bit, “if you have to have leukemia THIS is the one to have.” Officially it is called “chronic lymphocytic leukemia” or CCL, meaning that my mother’s bone marrow produced white blood cells at an accelerated rate which can keep your body from fighting infections as it normally would.

There is no cure for CCL but in cases that are so “mild” as my mother’s was, the treatment is straight forward. She would have to have regular coumadin evaluations and if her white blood count stayed in a certain range the CCL was held at bay. Doctors officially called it “the most common adult form of leukemia” and it was just that for my mom for some 10 years.

Madeline Chinn Naas was born with a zest for life and for a love of adventure, but at the end of the day it was family that was really the most important part of her life.

In late 1928, her family lost their sheep ranch in Utah while The Great Depression was in full swing. Knowing there were opportunities to survive elsewhere, her Dad and her 6 brothers piled into the car and moved to Idaho Falls, Idaho. Left behind was her Mother and her 4 sisters. Her Mom drove a horse drawn wagon the 500 miles, with the girls, to join the family. Madeline was still in still in her mother’s belly during this journey. She’d be born January 11, 1929.

David W. Brower pays tribute to his mom in this book, tracing her upbringing as well as her inspiring battle with esophageal cancer and leukemia. He also looks back his mom’s family, her husband’s, and her 6 brothers and 5 sisters, specifically her sister Leda. David also shares his vulnerability when talking about his relationships with his wives, his children, his friends, and even his employers.

In sharing his story, he explores his thoughts about prayer and faith, specifically by giving examples of how God “works all things for good.”(Romans 8-28) As a longtime cancer survivor, he also talks about how health issues affect someone’s loved ones.

Join the author as he celebrates the unconditional love between a mom and her son and reveals how he helped his mom pass with grace, love, and dignity.

David W. Brower was born in Idaho Falls, Idaho, to Lenis and Madeline Brower. An only child, he grew up an introvert with not many interests and very few friends. In high school, he excelled in typing and music and not much else. In his junior year, his English teacher turned on his creative juices by assigning him to write a paper with the title “Why Is a Mouse When It Spins?” He got a B+ and was forever on a creative bent from that moment on. He had a 28-year radio career writing thousands of commercials. He spent over 6 years in the corporate world running the branch office of an ad agency for the 8th largest automotive group in the country. Currently he has been a full-time voice actor since 2008. He has over 500 clients in 85+ countries and has recorded several audiobooks. He is single and lives with his dog, Maddie, in Palm Bay, FL