A New Etymology Hypothesis for the Wilkinson Surname (and Variants) in England, Ireland, Scotland, and Wales 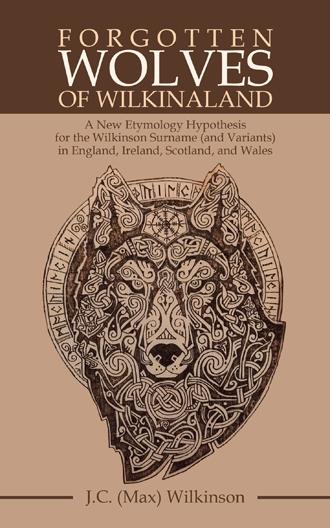 I submit that what I have presented here establishes that there is sufficient historical, ethno-linguistic, surname treatise scholarship and literary evidence to posit that the surnames MacUilcin and Wilkinson (and other “wilk” root variants) in England, Scotland and Ireland have a predominantly Norse-Danish (in Ireland, Scotland and England) and/or Frisian (probably predominantly in England only) etymology. This ethno-linguistic influence is rooted in the assimilation of the Polabian Slavic tribe of Wends called the Wylte/Weleti into Danish Norse and Frisian culture during the 6th through 9th centuries A.D., and is manifested in the Wylte/Weleti word “wilk” meaning “wolf”. That word, “wilk” is also the likely source of the mytho-saga appellation of “Wilkinaland” to the areas of at least Denmark and Sweden (and possibly all Scandinavia). It is possible that the mytho-saga name “Wilkinaland” had gained a certain folkloric currency in the Anglo-Norse region during the Viking era.

Accordingly, the standard explanation that the “wilk” root surnames originated from the Norman lineage of Robert de Wintona cannot account for all uses of “wilk” root surname in the UK and Ireland. This is not to say that all persons who have a “wilk” root surname are necessarily Norse or Frisian in genetic ancestry, surnames were sometimes taken due to feudal relationship, adoption, etc. as opposed to blood descent. Nevertheless, I believe the predominant source of the surname origin itself, is Norse-Danish and Frisian, and that it entered usage in these ethnicities through the Danish/Frisian assimilation of the Wendish Polabian Slavic tribe of the Wylte/Weleti in the centuries between roughly 500 A.D. and 900 A.D.

Instead, he submits that there are persuasive reasons rooted in mytho-history and period literature from the Anglo-Saxon and Norse traditions supporting an ethno-linguistic heritage from the Slavic Wylte/Weleti/Wilzi tribe. This tribe, assimilated into the Frisian and Danish dark age kingdoms, is ultimately the source of the “Wilk” root surnames in the British Isles and Ireland, as well as in the northern continental antecedent locations (i.e. Denmark, Frisia and Pomerania) whose migrations and invasions brought these names to England, Wales, Scotland and Ireland.

Join the author as he seeks to unravel the origins of his own family name and strives to provide answers for his children as well as for future generations of all families bearing “Wilk” root surnames.

Family piety and a deep knowledge of history are too often missing in 21st-century America, and we suffer as a result. I hope Max Wilkinson’s explorations of his family roots, which are now woven now into the rich tapestry that is the United States, inspires others to undertake similar journeys.
—George Weigel, Bestselling author of
Witness to Hope: The Biography of John Paul II

[The] trail... has now been blazed.... [T]his first-rate new analysis Forgotten Wolves of Wilkinaland.... deftly leads the reader on a scientifically and historically based journey to where the name ‘Wilkinson’ originated ... Wilkinson traces... with amazing precision and compelling evidence back 1,500 years... journey[ing] through ancient European tribes... to Norsemen to Scotsmen, Irishmen and eventually Americans. Wilkinson wrote his book to help his children understand... their roots .... [and] he has provided us all with a unique opportunity to learn the origins of our roots and our name.
—Dave Wilkinson, author of
Those Audacious Wilkinson Brothers

J.C. (Max) Wilkinson is a father of three, Catholic Christian, a Constitutional conservative, a former U.S. Army Infantry and Engineer officer (LTC, ret.), and a combat veteran of Iraq and Afghanistan. He is a lay genetic and traditional genealogist and holds a Bachelor of Science from the University of South Dakota and a Juris Doctor degree from the University of Iowa. He lives and works as an attorney in Virginia and West Virginia, and has done so for the last twenty-four years.