The Role of James A. Baker, III at the End of the Cold War 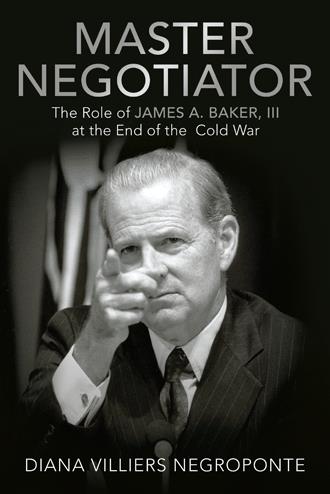 In Wyoming with Shevardnadze

In pursuing his prime interest, the US relationship with the Soviet Union, Baker needed an original way to talk informally with his Soviet counterpart, Eduard Shevardnadze. Why not invite him to the Jackson Lake Lodge in Wyoming? This broke the territorial limit of 25 miles beyond which Soviet officials were prohibited from traveling outside Washington, New York City, and San Francisco. Surrounded by the Tetons and with only a small group of advisors, the two men could discuss a wide range of bilateral issues. Shevardnadze was delighted to see the United States, as was his aide Sergei Tarasenko.

To get to the nearest airport, Baker offered Shevardnadze a ride in his official plane, upsetting his Russian handlers but giving the men the chance to talk quietly, each with only a note taker and one interpreter. Dennis Ross, who acted as Baker’s note taker, sat uncomfortably on a pile of satchels for the four-and-a-half-hour flight. Shevardnadze had eaten before boarding the plane, but Baker and Ross had not. Two hours into the flight, a very hungry Ross interrupted the foreign ministers’ conversation to suggest a break. Baker responded, “You think so?” but Shevardnadze answered, “Dennis is just always hungry.” The two continued discussing the nationalities question for another twenty minutes, until Ross, like a dog needing to pee outside, scratched enough to gain Baker’s attention. “I think Dennis really wants to have a break,” said Baker, and finally Shevardnadze conceded: “We’ll give in to Dennis this one time.”

In the conversation, Shevardnadze had shared with Baker the Soviet dilemma over the nationalities issue. As a Georgian subject to Moscow’s central control, he spoke in great depth about the difficulty of keeping USSR unified. The unusual trip seemed to have banished the traditional Soviet fear of revealing vulnerabilities that US leaders might exploit. He talked of the pent up desire within each republic to express their own culture in the face of a central authority that repressed all dissent. The decades of central control, he allowed, were “unnatural and that was unhealthy.”

Overlooking Jackson Lake and the majestic Teton mountains, the Jackson Lake Lodge offered Baker the opportunity to get to know his Soviet counterpart without a flock of advisers and the protocol of bilateral meetings in capital cities. September was not the season for hunting elk, antelope, or deer, but it was a good season for trout. Once there, Baker took Shevardnadze down to mountain-fed streams to fish; something his friend had never done before. Shevardnadze’s failure to catch a single trout did not upset the collegiality, but NBC’s Tom Brokaw chided Baker for not giving his Soviet friend a better line and fly. Baker sent a handwritten reply:

No worms – probably why Shev didn’t catch anything… Had never fished before at all! So the fly rod was out. The spinning rod was even too tough. But only the true sportsman like you noticed.

Baker was sensitive to Brokaw’s criticism, but he responded with wit and a compliment.

Over two days of formal meetings at the lodge, walks in the shadow of the Tetons, and steak dinners, the ministers discussed chemical weapons, arms control, Nicaragua, and other regional issues. During their walks together, Shevardnadze informally shared details of the economic difficulties confronting the Soviet Union. It was clear to Baker that the transition to social democracy and market capitalism was a serious challenge that would take a very long time. As a thank-you gift, Shevardnadze gave Baker an enamel picture of Jesus Christ’s resurrection. “You see, even we Communists are changing our worldview,” he said. In exchange, Baker gave Shevardnadze a pair of Texan leather boots, standard gear for men who moved truculent cattle and could easily slip on the muck of a cattle pen. He would need those boots, Baker told him, to keep his footing amid the political upheavals rocking the Soviet Union.

According to Ross, this unprecedented visit created a new level of trust and confidence that enabled the two men to talk openly about other themes on the bilateral agenda. The mountain air and their personal chemistry encouraged solutions to once difficult problems. After they returned from Wyoming, they instructed their respective teams to make progress on the transition to democracy in Afghanistan, environmental issues, and technical economic cooperation—issues on which they had seemed blocked just a week earlier. They also made progress on arms control and, of greater significance, dropped the linkage between negotiations on the Strategic Arms Reduction Treaty (START) and Reagan’s Strategic Defense Initiative, known colloquially as Star Wars.

From his career in US politics, Baker understood the importance of personal friendship, and it proved invaluable over the coming months as dramatic changes rocked the superpowers’ relationship. Shevardnadze’s candor allowed Baker to understand how unprepared both the Soviet leadership and the people had been for the political and economic changes required by perestroika and glasnost. He also told Baker that Gorbachev failed to understand what was happening in Eastern Europe: the Soviet leader clung to the belief that the Soviet republics and Soviet dependent satellites would voluntarily seek to retain a union among socialist nations. The reality was that Gorbachev and Shevardnadze were losing control over Eastern Europe.

Washington too would be blown forward by the pace of change. President Bush might try to stabilize revolutionary forces, but liberalization was inevitable. Scowcroft remained the cautious member of the team, and Gates the critic of real change in the Soviet Union – to the point that Baker asked the President to personally order Gates to cancel a speech that Gates planned to give in October at Georgetown University. Bush did so but admitted that the request “caused some heartburn over here.” Baker had used Cheney’s appearance on the Evans & Novak show to demonstrate to the Soviet leader that Bush also faced domestic opposition, but he knew that an administration cannot have conflicting voices on foreign policy, or it creates confusion. Years later, Baker acknowledged that the unified voice came from the fact that he and the President were close friends. “I would submit to you,” he told me in an interview, “that H.W. and I were forty-year friends. I ran all of his campaigns. He relied on me. The statutes say the Secretary of State is going to be the foremost foreign policy advisor to the president and the implementer of foreign policy. Bush made sure that was how it worked. That’s I think one of the reasons why his foreign policy was so successful.”

As secretary of state, James A. Baker III played a critical role on the world stage in the final years of the Cold War as the Soviet Union unraveled.

His political sense and the ability to test Soviet leaders, negotiate insoluble problems in the Middle East, charm friends, and achieve the placement of a unified Germany in the North Atlantic Treaty Organization were unmatched.

Diana Villiers Negroponte, an author, lawyer, and professor, highlights how Baker mobilized a coalition of international military forces, including the Soviets, to repel Saddam Hussein from Kuwait.

Baker seduced Israeli and West Bank Palestinians to meet face to face and begin the Oslo peace process and ended two civil wars in Central America. While he was initially hesitant about the Nunn Lugar bill to safeguard Soviet nuclear weapons, he became a driving force to transport nuclear material to secure sites in Russia.

The author also highlights Baker’s failures, such as the inability to hold Yugoslavia together or to provide sufficient funds to stop the collapse of the Soviet economy.

With a foreword written by former President George H.W. Bush, this book reveals Baker’s skills as a statesman—and explores how he changed the world.

Diana Villiers Negroponte grew up in London and Europe during the Cold War and observed its ending from the London School of Economics with anticipation. An American trained lawyer with a Ph.D. from Georgetown University, she is also the author of Seeking Peace in El Salvador: the Struggle to Reconstruct a National at the End of the Cold War and edited The End of Nostalgia: Mexico Confronts the Challenges of Global Competition. She has written widely on Mexico, Central America, and the last years of the Cold War for The Brookings Institution, Woodrow Wilson Center, and Reviews of American History. She appears on CSPAN, CNN, and MSNBC and lives in Washington, D.C.