A Sequel to Three into Nine 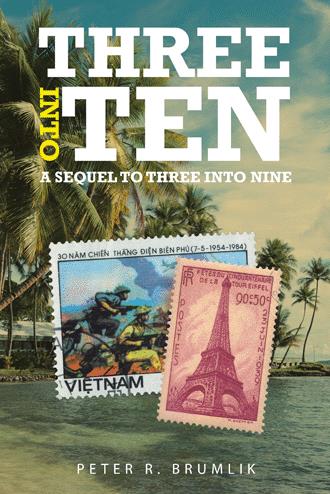 Much has been written about America’s failed foreign policy in Southeast Asia and the tragic war in Vietnam. Vietnam has become America’s albatross, and those men and women who survived the war wear that burden daily as they try to make sense of what they had been asked to do and how they were thanked for their service.
On the other hand, prior to the American adventure in Vietnam, the French too failed to win “the hearts and minds” of a colony that refused to obey, and in fact, beat them mercilessly. It was inconceivable that in the twentieth century, a peasant army could vanquish military modernity. It was implausible that in 1954, the Vietnamese would claim victory over the French, culminating in the final battle of the Indochina War in the valley of Dien Bien Phu.
The story of the French Indochina War was told in my first novel Three into Nine as it followed three companions from very different backgrounds throughout the space of nine years. Three into Nine is also a tale of the French Foreign Legion, told through eyes of Sal, a young American recruit. The Legion’s history, traditions and its abandonment by the French in Indochina unfold as Sal is joined by his friends: Avram, a young Auschwitz survivor and Jaehne, a sergeant who deserted the German Army shortly before the end of World War II.
After the final battle in May of 1954, at Dien Bien Phu, the Vietnamese captured 10,000 men, among them Legionnaires, Colonial forces and men of the French Army. In August, after signing the Geneva Accords that formally ended the war, the prisoners of war were repatriated to France; by then, only 3,000 remained alive. Avram and Jaehne were not among them.
Three into Ten begins where Three into Nine ends with the fall of Dien Bien Phu.
The history of resistance by the Vietnamese went unheeded by the French; eleven years after 1954 history would elude the United States, as well.

The Vietnamese have claimed victory over the French, culminating in the final battle of the Indochina War. As thousands of legionnaire survivors move forward on a trail leading to imprisonment, two men are not among them. Sadly, the young Auschwitz survivor, Avram, and the German Army deserter, Jaehne, have not survived. Only Sal, a dedicated combat medic, remains. But even his life remains in question as the battle for food and water becomes a daily struggle.

Meanwhile in Paris, René is filled with melancholy and missing Sal. Now as she returns to work as a nurse at the hospital where she met and fell in love with Sal, René focuses on bringing new energy to her work. While she continues hoping that one day she and her beloved will be reunited, Quinn, a Vietnamese physician, works feverishly to prepare for an onslaught of patients at the hospital near the Chinese border, even as he realizes he is ill prepared for such a situation. In these intervening years between the French and American wars in Vietnam, Sal, René, and Quinn soon realize that only one thing is guaranteed in this new chapter: uncertainty.

In this compelling sequel, redemption, love, and premonitions surround 1954 Vietnam as three survivors of Dien Bien Phu attempt to move forward into the unknown.

Peter R. Brumlik immigrated from England to the United States as a child, eventually appearing in numerous Broadway productions culminating in the Tony Award winning “Inherit the Wind.” He enlisted in the air force and served three combat tours in Vietnam and Southeast Asia. He earned his PhD while serving his country and eventually retired after twenty years of active duty. Currently, he teaches history and the humanities at the University of Colorado. This is his third novel.